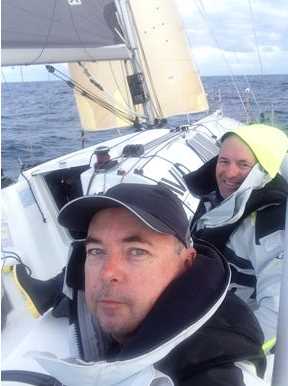 Long time sailing buddies David Kenny and Paul Schulz,  have sailed with or against one another over many year and developed an interest in the M2O race early on.  After hesitating for a short time when David (who lives in Melville, Western Australia) popped the question - “will you go to Osaka with me” – Paul (who lives in North Balgowlah NSW) said yes!

Both men cite the personal challenge of sailing short handed and the love of sailing as being their motivation to undertake the M2O 2018, using and gaining seamanship skills.  David has sailed the entire WA coast, crossed the Great Australian Bight and explored Tasmania.  He also completed a double handed crossing from Capetown to Fremantle, stopping only once for a few hours at the extremely remote Isle de St Pauls in the Southern Indian Ocean.  Paul has competed in a number of ocean races and sailed in the Pacific.

Paul is an Australian 18ft Skiff Champion and has twice been runner up in the JJ Giltinan 18 ft Skiff Championships. His special moment is remembered as being the first Sydney to Hobart start he was involved in.  David’s  personal best is remembered as “a very quick trip from Fremantle to Geraldton with a bunch of mates including a massive Chinese gybe”.   Both have had scary moments – wrestling aloft with torn sails in horrendous weather (David);  and signing up for the M2O!! (Paul).

While David’s family are “champagne” sailors, Paul’s wife and son Harry are both keen sailors – although Harry doesn’t know it yet!!  A Sunfast 3200 Bermudian Sloop, The Edge is so named for living “on the edge”.  Think coral reefs or mangroves;  or skiing very fast down a mountain;  or in fact racing to Osaka from Melbourne double handed.!  Perhaps David can relive the experience of a pod of dolphins seen in the middle of the Great Australian bight on a dark but very pleasant night, playing in the bow wave and scooting down the sides of the yacht stirring up bioluminescence and a flash of fluoro green each time their fins broke the surface.  That’s something to look out for.