Sailing Maverick double-handed, Rod Smallman and Tom Vaughan have cleaned up in the Ocean Racing Club of Victoria’s 48th Melbourne to King Island Yacht Race, taking out IRC, PHS and Double-Handed divisions and capping off with a second in AMS in the 114 nautical mile race to Grassy in Tasmania.

Double-handed racing is fast becoming à la mode in Australia, and Jeanneau Sun Fast 3600’s like Maverick are topping the podium at events in Australia and overseas.

Punching above her 11.7 frame is nothing new for Maverick. She and others like her have proved time and again they will not be bullied by their larger fully crewed counterparts, and Smallman’s years of experience, including placing top three in the ORCV’s 2018 Melbourne-Osaka Double-Handed Yacht Race, make the two a formidable package.

“Tom (Vaughan) and I have previously done Westcoaster (Melbourne to Hobart Yacht Race) together and he did the last Sydney Hobart with me. He’s amazing – for such a young head (24 years-old) he’s very stable. I love sailing with Tom. For his 18th birthday present, his dad, Martin (Commodore of the ORCV) took Tom on his first Sydney Hobart race on Wild Side in 2014 and he hasn’t looked back,” Smallman commented.

“I did the race with my son Tyson last year, and we pretty much had the same result, except Tom and I finished one better in AMS with second place this time. Last year’s race was really light though, and this year it was very heavy.”

Smallman gives credit to his boat too. “The Jeanneaus are incredible for double-handed sailing. The Sun Fast goes through the Bass Strait waves very well and we were fast. But we did well tactically too. I didn’t think we would be that competitive, as we didn’t have the weight for the rail in the heavier air. I think the tactics got us there in the end.”

A race for all-comers, of the 22 entries two were sailed double-handed (Maverick and Lord Jiminy), one Four + Autohelm (Spirit of Downunder, largely a family crew skippered by 82 year-old Laurie Ford), with the remainder fully crewed.

New to the race was E'toile, skippered by John Gordon who completed the ORCV’s Beyond the Bay program last year and made this his third ocean race and the first minus an ORCV mentor on board. 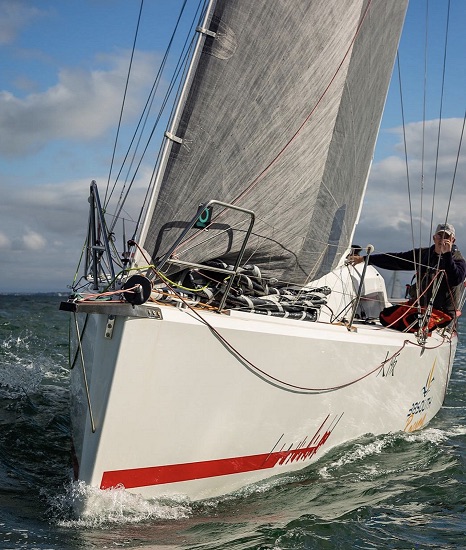 The race started with a 20 knot south-westerly beat. The wind veered slightly during the morning, when all but one tacked, pointing directly towards King Island.

On sunset, the tide turned, making it a challenge to maintain boat speed. Those who stayed east of the rhumbline scored better results. The first three over the finish line - Hartbreaker, Carrera S and White Noise - were within 1.2nm of each other, with the top two less than a few hundred metres apart. And just six minutes separated the fleet after the handicaps were put in place, making for an exciting race.

Starting off Queenscliff and finishing in Grassy Harbour, King Island, a party awaits at the King Island Boat Club, making it a popular race. As Grant Dunoon pointed out, “It’s worth the trip - a great steak at the end, wonderful hospitality and a great destination.”

Rod Smallman agreed: “I love the race. It’s so good, a couple of the cruisers stayed on to make the best of some cruising. And the Club has this reputation for ripping out the best steak sandwiches – this time it was the best I’ve ever had. Everyone stays, because half the fun is the catch up at the end. And the people from the Club stay up all night for us.”

A band plays until the wee hours as the last of the fleet trickles in to the King Island Boat Club, which uses the race as their major fundraiser for the year: “Apparently, they make enough out of what we eat and drink to make it worthwhile,” Smallman said with a laugh.

The First Melbourne to King Island Race started in 1973, a few months after the ORCV’s Westcoaster; meaning both will celebrate their half century editions in two years’ time.

Go Coastal Training Program for Skippers The Go Coastal Training Program is designed to provide support for established bay racing skippers who wish to join the ORCV Coastal Sprints fleet but have not previously raced outside the Heads. The program includes assistance with boat preparation, plus practical and theoretical training focussed on safe exit and re-entry through Port Phillip Heads. It also includes entry to the Coastal Sprint Race 2 on 21 November 2020. Skippers may choose to include their navigator in the Rip navigation training sessions also. Program Content Core modules of...

2020 Melbourne to King Island Race Updates 5pm Update - Within the hour or is the tide against them? The Race Directors Noel and Ryan are ready, who will come in first and will it be within the hour as they all battle now against the tide. Keep and eye on this channel, the tracker of ORCV website It's been a close and interesting race.  For the Race Director video - click here https://youtu.be/RSvSgwMZaFE 3pm Update - It could be anyone's race The party in King Island is gearing up with the first boats now around 2 - 3 hours away. The tactics of those that went east of the...

Race Director Update 11am 7th March for the 48th ORCV Melbourne to King Island Yacht Race 2020 With 1nm between the 3 lead boats on Line Honours and the fleet spanning 6 mins on handicap, the race could have an exciting finish with Race Director predictions having the first boats arriving by sunset and the last boats in by midnight. Keep an eye on the tracker or orcv website ORCV.org.au for updates.

Final Reminders – ORCV Melbourne to King Island Yacht Race Before you head off, just some final reminders, please.  Cash – please take cash so you can purchase your food and drinks on arrival. There isn’t a credit card at the event or teller machines easily accessible. Trackers - can you please turn your trackers on at 1900 on Friday 6th March 2020.  For instructions on how to do this click here  Crew Photos.  Please take a crew shot before you leave Melbourne or on the way to the start.  You can share it via media@orcv.org.au or via WhatsApp...