Hobart, December 31, 2019: Jeff Sloan’s Archambault A35 Archie has been declared the provisional winner of a very challenging ORCV Melbourne to Hobart Yacht Race, an event that takes the boats via the west coast of Tasmania’s world heritage wilderness.

Archie arrived in Hobart at 11.12.59 on New Year’s Eve during a night of rain and squalls.

“We knew it would be a tough race, which it was.” Jeff Sloan said, “But not because of big waves or strong winds – it was due to no breeze!

“It was the quietest crossing ( of Bass Strait) we have ever done, followed by a good run down the coast with some storms at the end.”

Asked whether he would recommend the race to others, he pointed out that for all but two of the crew it was their first time in the Westcoaster.

“My advice is, don’t fear it. Yes, it’s a challenge but one that anyone can do.

“Most of my crew are graduates of the ORCV Beyond the Bay program and I think that set them up to be able handle whatever was thrown at us.” 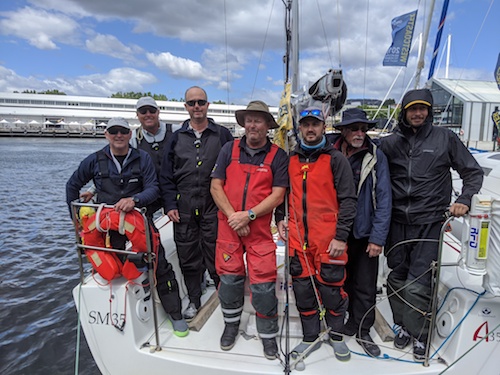 Line honours winner was Guillaume Leroux’s Class 40 Lord Jiminy, the first French entrant in the race. After arriving in Hobart at 3.30am, Leroux commented, “They were very challenging conditions after we rounded Maatsuyer Island at about 4pm yesterday. When the thunderstorms came through we were down to a staysail (with no mainsail up) but still had a top speed of 22.5 knots. It was tough, but we enjoyed the challenge.”

The boat was entered in the four-plus-autohelm division, introduced by the Ocean Racing Club of Victoria to encourage participation in offshore races. Joining Leroux on board were Patrick Conway, Michelle Zwagerman and Kim Rea.

Second across the line was Douglas Lithgow’s Archambault 40 Soiree Bleu, arriving in Hobart at 6.43am.

The crew was in good humour despite the early hour, commenting that they had seen a lot of whales off the west coast of Tasmania and that the light air conditions experienced during the first two days had produced “a lot of bad jokes”. 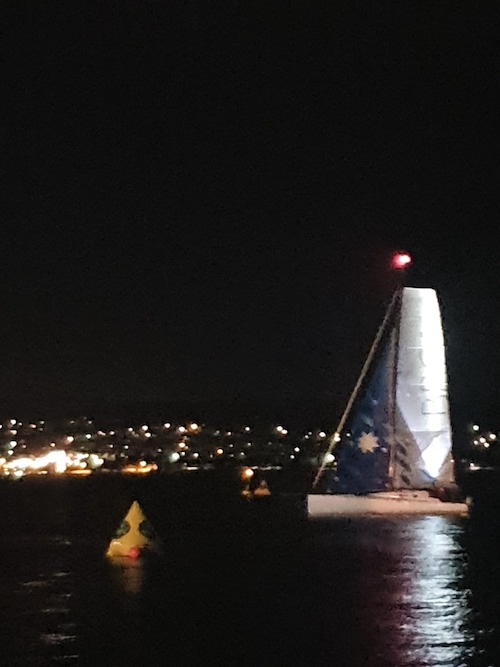 There was a mix of experience and inexperience on board, with husband and wife pair, Neil Butler (14) and Deanne Colledge (15) boasting 29 races between them. However, for Matt Solly, member of Royal Yacht Club of Victoria and Soiree Bleu crew, it was his first Westcoaster. He commented: “I saw the best downwind skippering ever when we were over-canvassed but the skipper (Doug Lithgow) handled it so well. It was great to have conditions of from 0 to 48 knots of wind!”

The light conditions that had the fleet moving at less than four knots for the first two days took its toll, with two yachts withdrawing from the race.

Alien suffered some halyard damage while Saltair also advised they were motoring to Hobart, with no reason yet given for their retirements.

Lisa Blair and Jackie Parry on d’Albora’s Climate Change Now was expected to finish at around 6.30pm on New Year’s Eve, just in time for the celebrations.

The race will go down as one of the more difficult in recent years, with an unprecedented two days of calms followed by thunderstorms and strong winds. Ocean racers expect to be challenged by the conditions and all entrants are considering doing it again next year.