Sailed double-handed by owner Alex Toomey and crew-mate Andrew Hibbert, Ryujin has won the Ocean Racing Club of Victoria’s (ORCV) 2022 Apollo Bay Race, in which Margaret Rintoul V (Damien King) took line honours in a close race across the board. 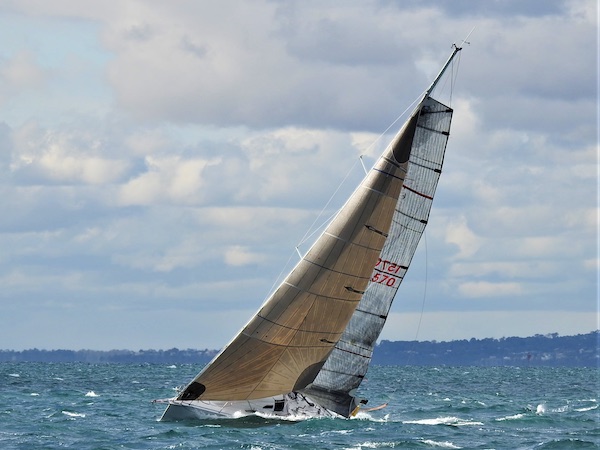 A fleet of 31 boats started the 52 nautical mile race. Ryujin, a Sayers 12,  beat Jason Close’s J133, Patriot by a slim 14 second  margin to claim overall victory under AMS, also winning PHS and Double-Handed divisions. At the front of the fleet, King’s Frers 61 crossed the finish ahead of Extasea, the Cookson 50 owned by Paul Buchholz but skippered by Simon Hunter in his absence, by a mere 55 seconds.

Starting under the cover of dark in drizzling rain at 6am on Saturday, following a 15 minute delay as officials waited for the breeze to fill in, Margaret Rintoul V (MRV) led the fleet out of Port Phillip Heads. Her finish time of 5 hours 58mins 31secs fell 24 minutes shy of Kaos’ (Peter Blake) 1999 record of 5 hours 34mins 4secs. 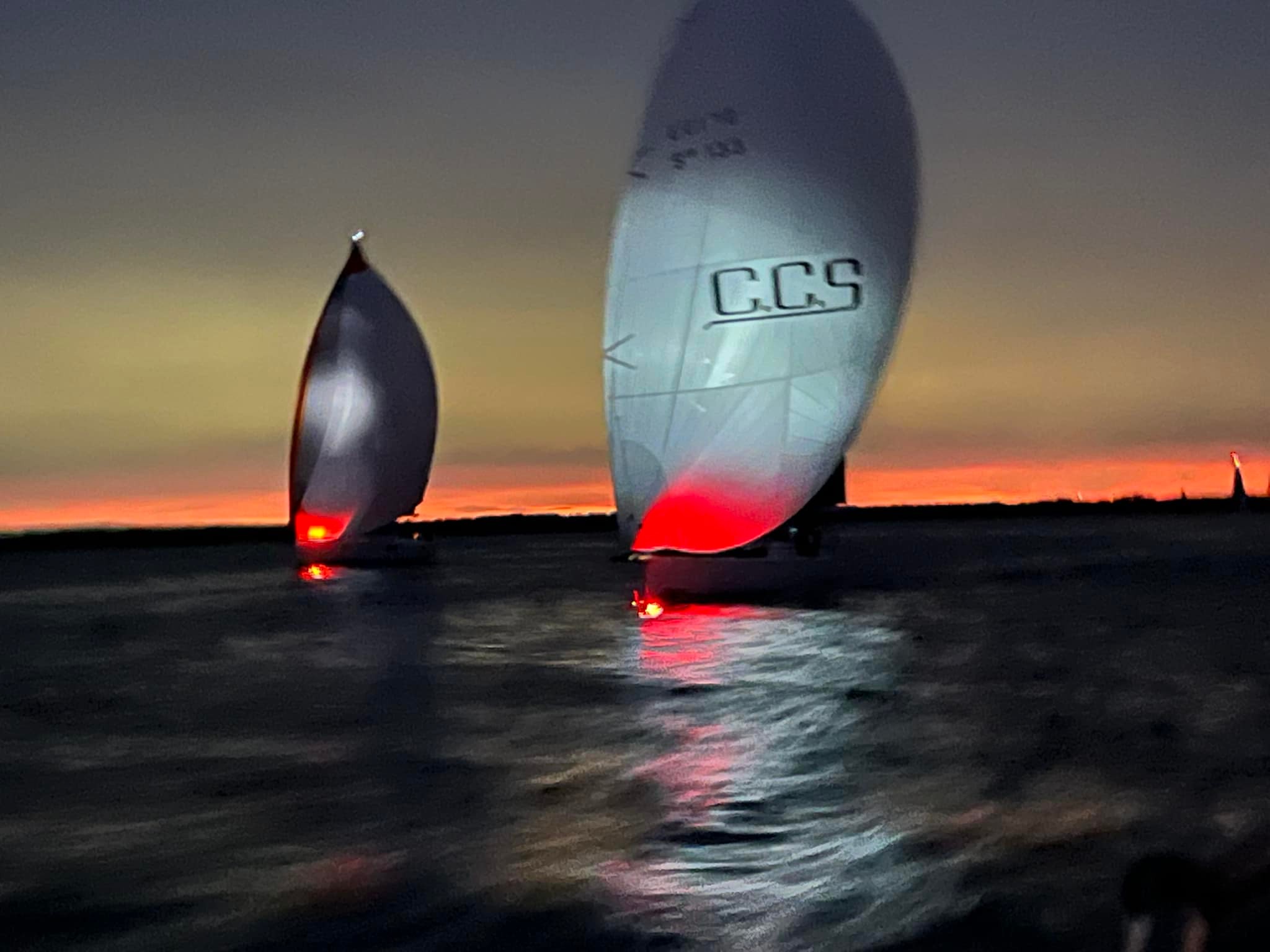 Crews enjoyed a reaching race, owners selecting their light air sails to start. However, by 10.30am, winds had built to 18 knots, gusting to 30 from the north, with squalls and bullets coming off the land. Unprepared for the ferocity, quite a few are putting money into the pockets of sailmakers today.

MRV will full gear up, was just ahead of Extasea, which had two reefs in the main. According to the Race Directors,  MRV was heeling so far over, it appeared her gear was touching the water.

“We had ever sail up, but we had a reef in the main for a bit,” King confirmed. “It’s an old-school heavy sort of boat (German Frers design built in 1996) with a big rudder, so it can take the conditions better than the modern boats. We had a great time.

“We used our new Code Zero with our other near-new sails built for the Hobart, all from Aaron Cole at North Sails. We used them all in combination with each other. Our Code Zero, asymmetrical, jib, inner jib and main. We finished with full main and normal working jib.

“Extasea sailed higher than us in less breeze, so it made their conditions a little tougher than ours. They were getting squalls above them, while we were to leeward, so it was easier.”

King said new systems and new technology had been added to the boat, “So we can sail an older boat easily.” 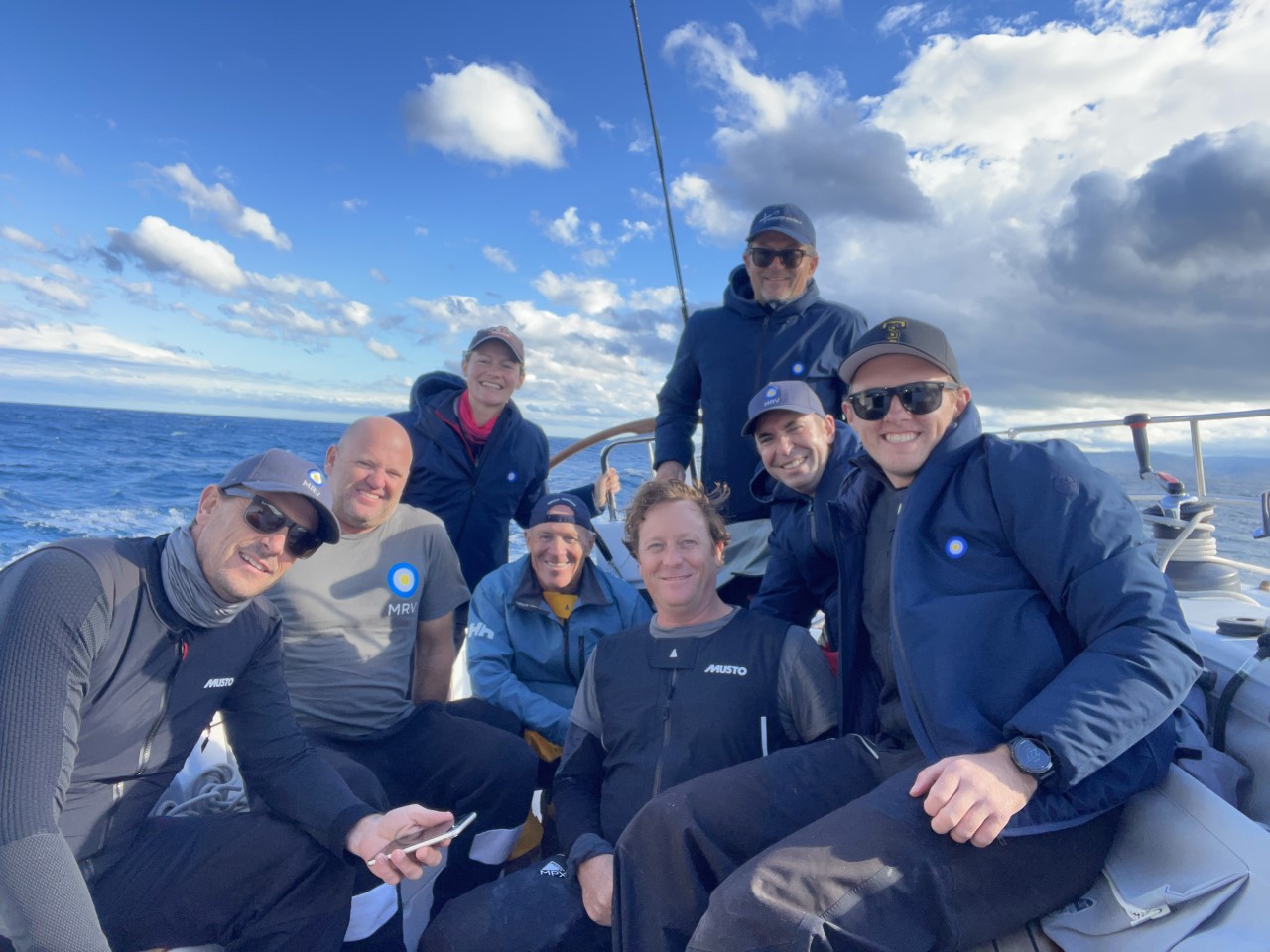 “The catering was good. We had the oven running the whole time. I don’t think we’ll need to eat for the rest of the week. Jonny (Orr), a regular crew, filled in for our usual caterer, Matt Mullins (a renowned Victorian publican) and did a great job.

“Eliza trims spinnaker. We didn’t have the perfect start, but we managed to leave the Heads first and she led the charge,” King ended.

Ryujin, sailing for CPR Australia, “a good supporter,” Toomey says, wasn’t far behind the leaders throughout. It was Toomey’s first double-handed ocean race, so an amazing result for the pair.

“Andy is part of my regular crew and we’ve wanted to do offshore racing two-handed. Since moving to Melbourne two years ago, we’ve got to know each other and push each other hard. I really enjoy sailing with him and I’m looking forward to more. ” Toomey said.

On the race to Apollo Bay, “We’ve been able to keep up with the Cookson 50, in this and the King Island Race. We were up with them this time but broke the tackline, Toomey said.

“There was lots of reefing, switching the Jib Top and the A3 spinnaker and moving the water ballast. We were pushing very hard. We were very determined. When we saw MRV we pushed harder and as we did, she got bigger. “It’s a good incentive having bigger boats in front of you,” he said. 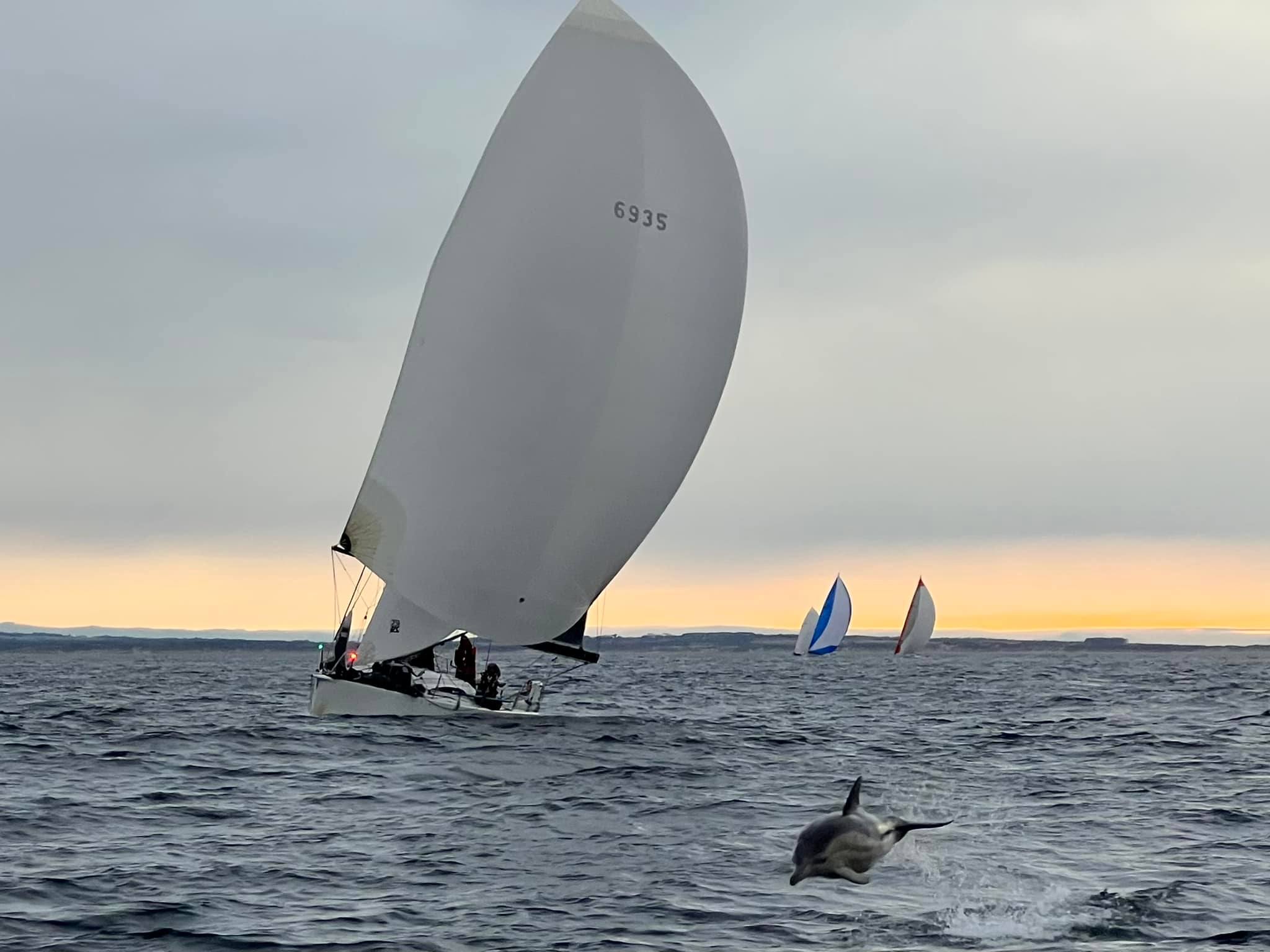 In Bass Strait, competitors reported pods of dolphins egging them on as they leapt through the waves. As the fleet approached Apollo Bay, the grey day was replaced by blue skies, with crews bathed in sunshine. Those who elected to sail back to Melbourne after the race enjoyed a glorious full moon home. It was a perfect end to a hard day on the water.

The ORCV Offshore Championship came down to the wire, with Alien (Justin Brenan), Audere (Joshua Thring), Vertigo (Timothy Olding), Vagabond (Andrew McConchie) and newcomer Foggy Dew (Robert D’Arcy), in the running. Alien came out on top in the end. 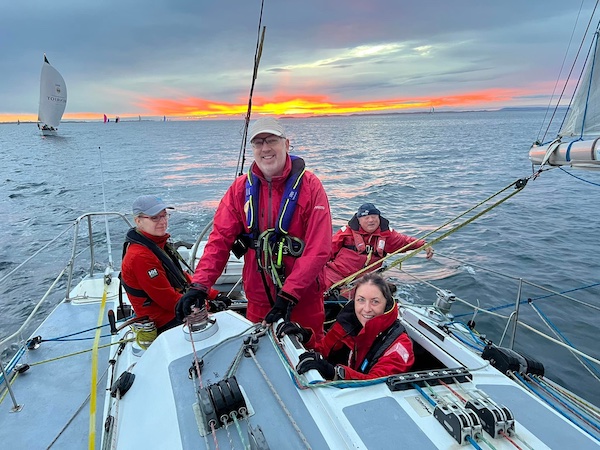 Race Updates 69th Apollo Bay Race 2022 11.30 Update Race Director Update "With the first boat now in sight, the Race Directors Jeremy and Cam reflect on the senseless loss of the ORCV Race Control van as they set up a makeshift race management desk in the cold.  The winds have continued to build with some yachts reporting 30 knots at times and the first boat due in within the hour.  It may have been a sailmakers day today for those who still had their light air sails up when the squalls hit.  It's now certainly a two sail race thankfully fast still given how cold we are...

Weather Prediction Apollo Bay Race It's predicted to be a great race to Apollo Bay with 10 - 16 knots from the NNW and a simple reach most of the way. The wind coming from the North will give rise to stronger gusts to keep your eye out for. Wish our fleet well as they prepare to start for the race early on Saturday morning.

Final Reminders – 69th Apollo Bay Race 2022  Before you head off, just some final reminders, please.  Sailing Instructions - if you haven't already located them please click on this link. https://www.orcv.org.au/apollo-bay-race-documents Harbour Entry for Apollo Bay - Updated sounding (taken 11th May) for the harbour at Apollo Bay can be found here.  Please note their depth at the time of measurement and remember to take this off the sounding noted. Apollo Bay Sailing Club BBQ.  The Apollo Bay town is buzzing this weekend with the Great Ocean Road Marathon...