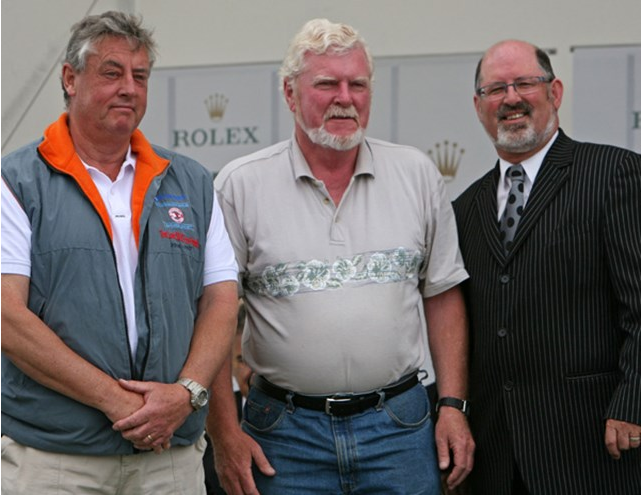 Vale - Graeme Ainley, known also by the name of GA

Graeme a long-standing member and participant of the ORCV has sadly passed away. 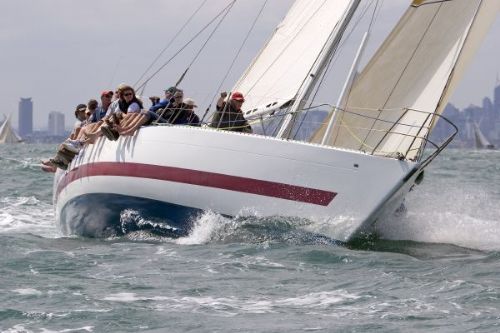 Graeme also was part owner of CALM who won the ORCV Melbourne to King Island race in 2012.

Graeme was an active and very competitive member sailing offshore, completing 25 Sydney to Hobart yacht races, as well as being a long-standing member of Sandringham Yacht Club (SYC), SYC Commodore 1995 - 1996, Former President of Yachting Victoria, Former President of Australian Sailing (in 2003 when it was known as Australian Yachting Federation).

Robin Hewitt recounted how returning yachts from Hobart via the west coast would call into Port Davey for some cricket and a BBQ on the beach at Schooner Cove. So popular was the event that GA and Willo devised the Melleuca Inlet Yacht Club. Membership was the price of the club T-Shirt. A sojourn at Clayton’s Corner Hut where a shower and fireplace were enjoyed for the evening was followed by a headsail only race back to Schooner Cove, BBQ and refreshments before the trip back to Port Phillip.

Robin went onto telling about one celebrated King Island race with some 25 entries encountered a gale for the start. Only 4 yachts started including Barcardi and Yoko. Both had a wager of a keg for first arrival at King Island. A pretty tough sail where one went East and the other West miraculously meeting with just 100M between them off Naracoopa. Then ensued a fierce tacking duel to Grassy where Yoko finished just ahead, Bacardi having sheared the top off their pedestal winch.  The whole of King Island were lining the shores after word got out of the close race in 40-45 knots. Whilst consuming the shared wager, a remark was made about the sign-on of race starters. GA said as an Alpha call up, Bacardi was early on the sign-on list and we knew Yoko would be a starter so we had to sign on. The crowd at Grassy was enormous and the King Island Boat Club sold a record quantity of beveridge in spite of just two yachts finishing.

"Sailing with GA was rarely dull and often exceptionally entertaining" said Hugh Halliburton. "Two incidents from the latter years on Georgia come to mind. When we were delivering the boat from New Zealand.  We got absolutely hammered for the first few days in 30-40 knots right on the nose. Early one evening, GA was on the helm and we dropped off a bad wave which dislodged the very expensive, custom made carbon fibre wand from the top of the mast which left it swinging around on the cable. I remember saying to GA, hold her steady Graeme and I'll try and catch it if it lets go. His reply was priceless.."Bugger that, I'm trying to put it back on." 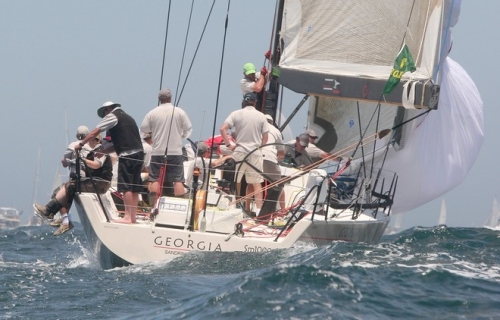 Hugh went onto say "In the 2008 Hobart after we ripped the rudder out of the hull and were taking a lot of water, our Irish crew member was chucking buckets of water out of the hatch when he stumbled and threw one straight over GA who was dressed only in his infamous gaudily striped thermals. Gareth apologised profusely and GA replied, "Don't worry mate, I think we are about to get a lot wetter."

"There are so many more GA stories which I will save for another day. His enduring partnership with Willo was extraordinary. They were in many ways complete opposites, yet complemented each other beautifully. Whilst Willo was very droll and somewhat taciturn, Graeme was effusive and garrulous. You were never left wondering what was on his mind and if things were not happening as he wanted you could often be the receiver of a torrent of GA's particular form of 'abuse', which although extremely pointed and often very humorous, was never meant or taken as being personal or hurtful."

He truly was a very unique individual and will be missed greatly.   Our deepest sympathy to Margaret, Belinda, Mark, Michelle, Will and the entire Ainley family.