Cock of the Bay Race Line Honours goes to Ambition. 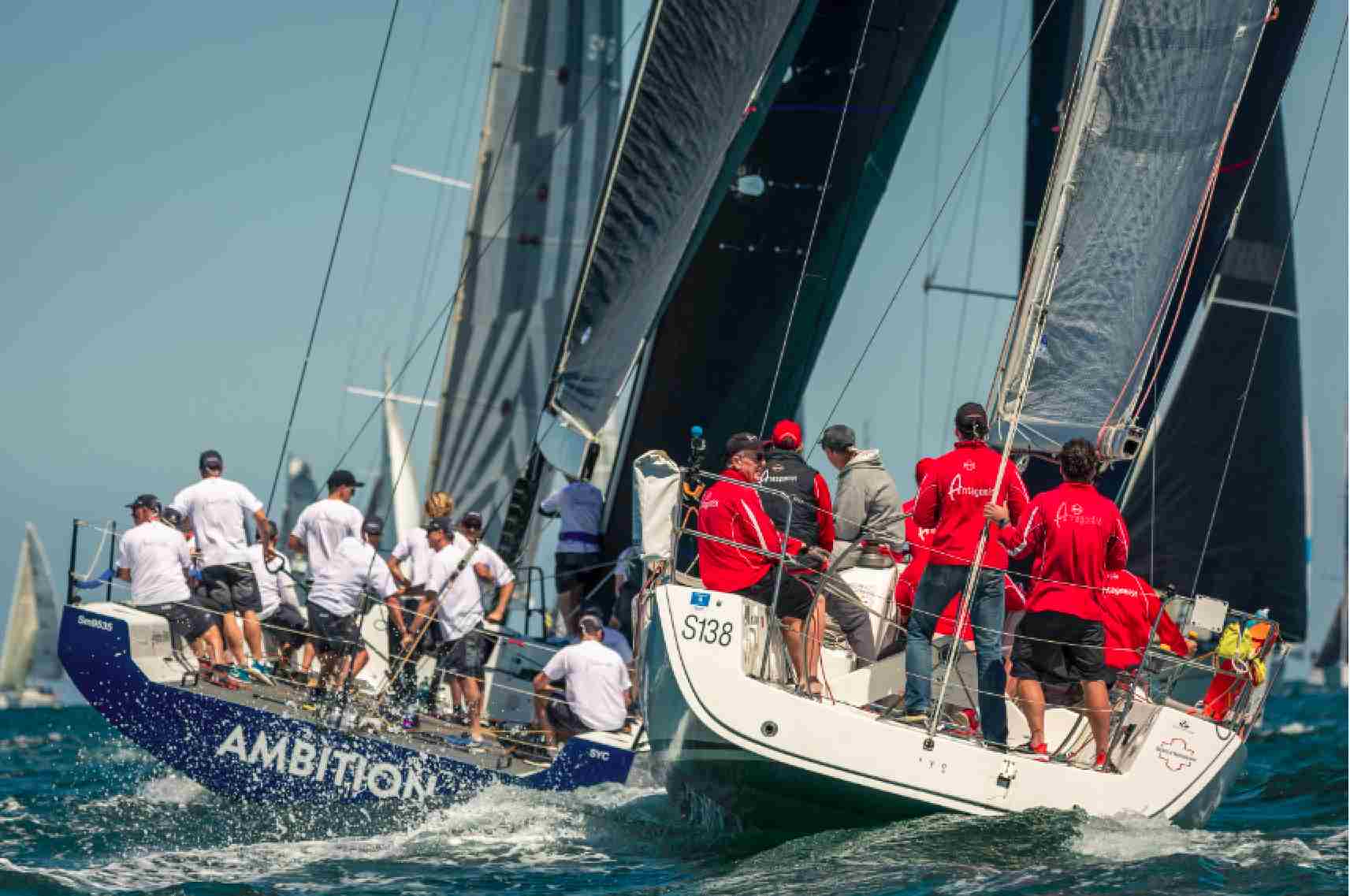 A delighted Chris Dare and his youthful crew on the TP 52 Ambition has taken Line Honours in a light wind Cock of the Bay yacht race followed closely by Tasmania boat Oskana.

Dare said, “I wanted a boat that provided a youthful new platform. Something that is fast and Fun.” Despite the light wind conditions, Ambition crossed the line at 16:00:21 for an elapsed time of 4 hours 30 minutes and 21 seconds.

Just three minutes behind was the Cookson 50 Oskana, skippered by Mike Pritchard. Pritchard and most of his team have had a long day. They caught the six o’clock flight out of Hobart this morning to make the rendezvous with their boat at Sandringham Yacht Club, so will be looking for an early night after they prepare the yacht for the start of the Melbourne to Hobart race tomorrow. Oskana was already favoured to take Line Honours in the 435 nautical mile race down the west coast of Tasmania and the competitiveness of their race today has confirmed their favouritism.

Hobart based surgeon Mike Pritchard's yacht arrived in Melbourne only this week in anticipation of to tackling the Melbourne to Hobart ‘Westcoaster’ race for the first time. Pritchard bought the 2013 Sydney Hobart winner (then Victoire) last year and has been performing well in the Tasmanian waters. Pritchard has his sights firmly set on Melbourne to Hobart but with the Cock of the Bay race being the first of the Sovereign Series a good performance was essential.

“With their canting keels, the Cookson 50’s are a terrific reaching boat. If ever we have a race that delivers that type of weather, she should perform beautifully so it would be great to experience those weather patterns, and potentially come home with a win,” said Pritchard

It will be some hours before the overall winner on handicap can be confirmed with most of the rest of the 77 entry fleet still to finish but the light and fickle breezes are likely to favour the smaller boats in the fleet.

The conditions prompted a changed start to the Boxing Day Cock of The Bay, as the 77 strong fleet edged its way from Sandringham instead of Station Pier on Port Phillip Bay and the start was not without controversy with some close line calls. The delayed 11.30 start and 10 knot southerly breezes had persuaded race directors at ORCV to shorten the 34-nautical-mile course by four miles.

Having set a wide line to accommodate the large entry list it was surprising to see so many of the yachts crowded the start boat end of the line. Three yachts in fact made contact with the start boat and several were forced over the line early and had to return to restart.

However line honours favourite, the TP52 Ambition, sensibly headed to the pin end and got a terrific start in clear breeze, followed closely by the Cookson 50 Oskana and both were crossing tacks in the early minutes of the race. Paul Commins’, Carpe Diem (First 50) did jump too early but was able to just dip the line for its restart and powered up quickly, with these three 50 footers setting the early pace for the voyage to Blairgowrie. Also away cleanly was Mike and Mark Walsh on the slick First 40 Wicked, a previous overall handicap winner in this race.

By the latter stages of the race the AIS beacon information showed Oskana powered up and going to windward at 9.2 knots as it chased down Ambition, while several miles behind within a large group of boats David Aplin's Whistler (Mbd36) was making 6.2 knots off Mornington while between them the First 40 Wicked was staying in touch with the leaders.

The Cock of the Bay is also a shakedown and feeder race for the Melbourne to Hobart and 195nm Melbourne to Devonport races that start off Portsea on Wednesday 27 December. Departing Portsea near the turbulent mouth of Port Phillip Bay, the first challenge for crews is riding the infamous rip at slack water to enter Bass Strait where the fleets will diverge for the 125 mile crossing to Tasmania.

For those Devonport bound, the prestige of winning the The Rudder Cup is at stake. The Rudder Cup is Australia's longest standing ocean race and the fifth oldest organised ocean yacht race in the world, pre-dating the Fastnet by nearly 20 years and the Sydney to Hobart race by nearly four decades. Close racing is anticipated among the fleet of fairly similar 40-50 foot cruiser-racers that includes Eddie Mackevicius's First 40.7 Merlion. Also among the eight entries for the race - that are all from Victoria - are double-handers Bruno Carreto's Under Capricorn, a Borrensen 12 that is co-skippered by Brian Patterson

The longer and arguably Australia's most challenging offshore race, the 435 nautical mile Westcoaster, the Melbourne to Hobart will see a fleet of 12 this year. Their course will take crews across the west end of the infamous Bass Strait, threading the needle past the tidal waters around King Island then down the west coast on the edge of the Southern Ocean before turning east at the southern tip of Tasmania and arrival in Hobart. Bookies favourite,Michael Prichard's Cookson 50 Oskana is a powerful canting keeler with not many strong challengers in terms of LOA, however should downwind conditions prevail the Archambault 40 Soiree Bleu of Douglas Lithgow and the First 44.7 Christine owned by Paul Bunn may challenge. Other interesting boats to watch on the ORCV trackers are the double-handed and four + Autohelm entries Maverick and Red Jacket respectively. Red Jacket, the Radford 12.2 is skippered by Annette Hesselmans and female crew who will use the autopilot to help sail their course. Over on the Maverick, the Jeanneau Sunfast 3600, double-handers Rod Smallman and crewman Thomas Vaughan will have a busy time sailing down the potentially wild west coast.