Back in Black smashes ORCV Cock of the Bay record

A massive fleet of 70 boats, carrying more than 425 crew, set off from the Port of Melbourne into strong headwinds on Boxing Day in the annual ORCV Cock of the Bay Race to Blairgowrie.

Despite conditions that were unfavourable to a multihull, the Extreme 40 Back in Black smashed the race record, completing the 34 nautical miles in 3 hours 36 minutes. The previous multihull record had stood at 4 hours 10 minutes, set by Bare Essentials in 2016. 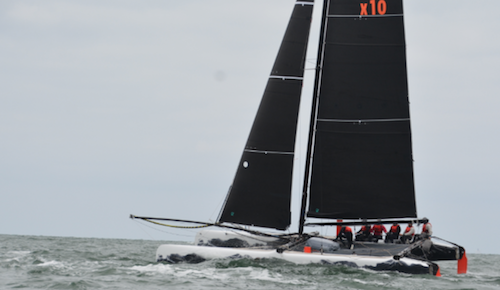 ORCV Cock of Bay record holder Back in Black

Skipper Michael Van Der Zwaard said the wind strength had varied throughout the race. “We were doing 18 to 19 knots upwind, which is pretty good, but at times that dropped down to 13 knots.

“We also had a little problem when a block controlling the mast rotation exploded. That slowed us down for a minute or so.

“It was a bit wet for the crew at times,” Van Der Zwaart laughed. “But not for me, steering at the back of the boat.”

“It was a great race, though,” he said. “We were on one tack all the way from Brighton to Mornington.”

The Extreme 40s were once at the cutting edge of sailing technology, with former Olympic champions among the sailors who competed on them in a world-wide stadium racing circuit. There are three Extreme 40s in Australia, with rumours that a fourth may be joining the group soon.

First monohull across the line was Bryan Dorman’s 68ft Journey. Dorman described it as “a perfect sail”. 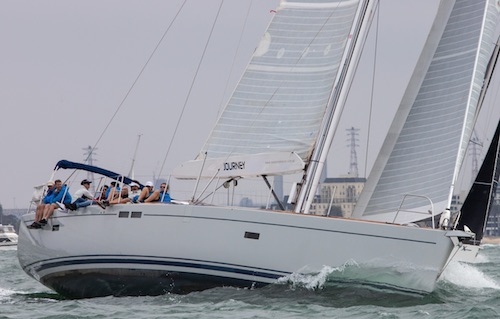 Solo sailor and adventurer Lisa Blair had a fun day on d’Albora Climate Action Now. She will sail the ORCV’s Melbourne to Hobart West Coaster two-handed with crew Jackie Parry but for the Cock of the Bay she had seven supporters on board. They were to the back of the field, but in essence it was a delivery trip to the West Coaster start line.

It was a long day for some of the back-markers, who were still finishing at 6pm. But the sun was out and the noise level grew in the bar. 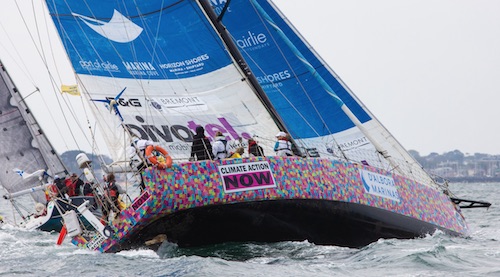 In the double-handed division, David and Julianne Gibson’s Beneteau 375 Karina took the honours.

Full results are available at www.orcv.org.au.