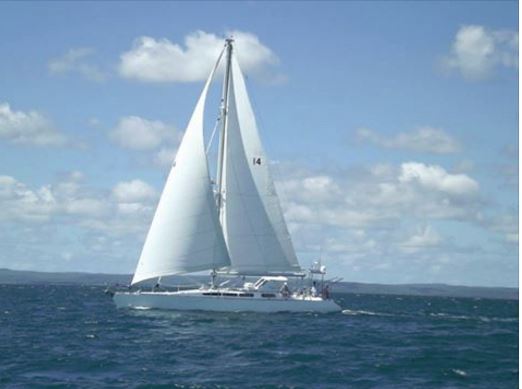 Queensland entrant Rattle N Hum III is an Adams 15 with the extended sugar scoop stern making her LOA 16.5m. She sports a cutter rig and carries a wardrobe of asymmetrical kites to keep her honest. Designed by Joe Adams and Graham Radford, built by McIntyre Yachts and launched on 1990 ‘Rattle’ spent her early years club racing and the odd ocean race such as the Brisbane to Gizo (Solomon Islands) Race. During the 90’s the Adams 15 production boats proved to be a very honest racing yacht especially when it came to running off the breeze

The Melbourne to Osaka race has been no stranger to the Adams yachts with many being entered since the very first M2O race and all distinguishing themselves in varying degrees.

‘Rattle’ is owned and co-skippered by Ed and Rachel Gibson who are the second owners of the boat which they have been sailing since early 2004 with the Hervey Bay Boat Club Yacht Squadron. As well as Rattle N Hum III, Ed and Rachel own a custom 7m OAK trimaran ‘The Squirrel’ which they race very regularly in the waters off Fraser Island.

Ed admits that today’s more modern yacht designs with their lighter construction and dynamic rigs and sails tend to set the pace in this day and age, but with the right conditions ‘Rattle’ can still pull up her skirt and crack along with good daily log averages.

Ed has been on sailing boats since a very young age and has logged well over 75,000nm of which many were throughout the pacific. He has competed in a round the world yacht race, numerous classic and coastal races, deliveries and cruised the deep blue more times than he can remember. Ed has also sailed the Isle of Wright and Fastnet Races! Along with the monohull sailing he has raced extensively on multihulls at national level. Ed holds a Yacht Master and Offshore Coxswain qualifications.

Rachel first started sailing early this century and has evolved into a fantastic offshore racer. She has a keen eye and feel for trimming and brings a great suite of skills expected of a successful short-handed skipper. Rachel has logged over 10,000nm.

In their spare time and to stay nice and fit, both Ed and Rachel are competitive outrigger racers paddling at both national and international regattas.