Preparation for the Race.

The following preparation tips were provided in a recent interview with Martin Vaughan from Cadibarra 8, competitor in the 2013 race.

How do you choose a partner ? 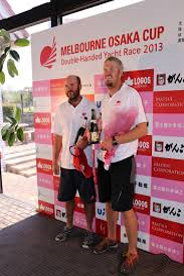 Choosing a partner is probably one of the hardest things to do. You are going to spend a heap of time together. One of our greatest achievements was to arrive still friends. In past races many partners have arrived and never spoken again which is sad. For Paul and I that was a real focus.

Paul chose me but to some extent I also chose Paul. You both have to be able to do every job on the boat, unlike other races there is no “me skipper, you crew”. I respected that Paul as owner ultimately called the shots, but we had a policy that whoever was on the wheel, it was their decision. We both agreed not to question the other. At night, when the wind is blowing you had to trust the other without question, so sailing skill and knowledge was critical as were shared objectives. We were determined to finish, so were equally conservative but also equally competitive (it was after all a race). We were both boat owners and skippers, so that helped too, you think alike.

How do you choose a boat ? 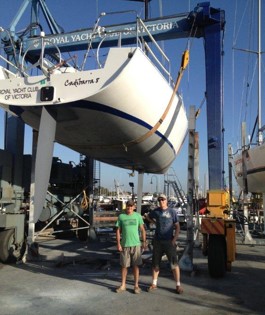 Well there is theory and there is reality, we often have to go with what we have. Saying that, Paul purchased Cadibarra 8 with the race in mind, he chose well as it’s a great boat. Designed by Don Jones, it had been prepared for a previous race so Paul figured that was a good start. If I were looking now for a boat, key aspect is that you have to be able to sail it yourself. The race is two handed but it is possible your partner could be asleep, incapacitated or worst case overboard. A big factor for us was the ability to manage the sails alone. Beyond that it was a race, so speed and ratings were a factor. Strength, condition, stability, equipment they are all things to look for.

How long should you allow to prepare ?

It took us 18 months to prepare. Both Paul and I shared a similar approach in that we were “do it yourself” types. We were both pretty handy, Paul with fibreglassing and rigging, me with electrics and mechanicals. Yes it saved money but key aspect was that we knew every nut and bolt on the boat. Electrics are a particular mystery to some. Computers, Internet etc are temperamental at the best of times.

We started by selecting an ORCV race (King Island) and try it with what we had. We thought we were really well prepared but soon found that a faulty autohelm, foil headsails and bolt rope main made 2 handed sailing difficult. We learnt fast and made a big list.

What did you do to prepare the boat ?

There were some big ticket items which combined preparation and maintenance. Paul re-rigged the mast and put on a track & car system for the main as well as removed the foil, changing to hanks for the headsail and re-installing the lazy jacks. These changes alone made Cadi so much nicer to sail, and meant we could drop sails by ourselves. He even renewed the sail drive and engine, along with the fuel tank which caused problems in the previous Cadibarra 8 Osaka campaign. One mistake we made was not rewiring the mast while it was out – obvious in hindsight.

Cadi had waterballast but didn’t need it, it sailed beautifully without it. We removed the intake pipe so there was no controversy there. We even used two of the ballast tanks for additional fresh water, taking an additional 150L split between each side. That made for a luxurious shower, bliss ! We rewired the boat completely, the old wiring and switch panels were terrible. We installed AIS (incl MOB transponders), Sat phone with internet, Expedition via a laptop for navigation, we installed a larger alternator, wind generator and portable solar panels and renewed the batteries, adding a third. We installed some creature comforts such as refrigeration, fans, microwave (which rarely worked), even a small oven. Paul built some steering platforms and installed a new stereo and we even put in a new head. We repaired lots of small stuff, found a bean bag (fantastic don’t leave without one), some shade sails since Cadi had no dodger. Finally we took spares, lots and lots of spares including starter motor, alternator, autohelm parts, so many spares. Murphy’s law if you take it you wont need it, if you don’t …..

What would you have done differently ? 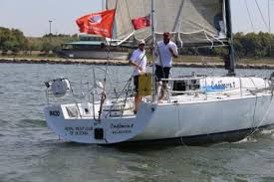 We had real troubles with keeping batteries charged in order to use autohelm, it was probably the biggest challenge we faced on the water. We simply didn’t have the fuel to keep charging batteries. Paul found on the trip home two more 100AGM house batteries on top of our bank of three 100AGM batteries plus starter battery solved the problem. Rather than trying to charge three batteries to 95% its so much quicker to charge five to 85%. Forget the solar. Wind generator has such a limited range and is noisy. More batteries, simple solution. Spirit of Downunder has a genset which was very efficient. Whatever, just ensure you can use autohelm, we hand steered 80% of the race which was pretty tiring. The only other thing might have been a dodger of some sort, with shade protection too.

What about preparing yourself ?

There are a few aspects to this. One is preparing financially, with your work and family too, its not a cheap race to participate in. Personal fitness, I needed to go to the gym to build up core strength. After the King Island race, I found I fatigued easily and lacked strength, the gym fixed that.

Sailing wise, we did every ocean race we could in the lead up, including the Melbourne to Hobart West coaster, that’s when we knew we were ready for the Osaka, it’s a tough race. You both need to be able to navigate, do radio, first aid and cook. You both need to do the chores, cleaning and tidying up after yourself.

The final preparation is mental. It will probably be the toughest thing you will ever do, expect that and you will be ok. Boredom is a factor, I took a MP3 player with talking books for those late nights. Sleep and fatigue, that’s going to be tough too, it affects people differently. We did 3hrs on 3hrs off, 2 on 2 off in the rough stuff, remember that’s for 32 days (more for a smaller boat). We did have a policy not to wake the other up unless absolutely necessary. Heat, the sun, getting wet and cold at times, personal hygiene (you get pretty stinky), it’s a battle at times. Fortunately neither of us got sick but I did get pretty bad rope burn which wouldn’t heal and Paul had a nasty fall with severe bruising. You will have tough times, we had 3 days >30k on the nose by the end of which we were exhausted, it took a couple of days to recover. We had very heavy running, which takes huge amounts of concentration. We had the doldrums, boy it gets hot and combine that with 00 on the gauge and flop flop of sails, its enough to frustrate the best of us.

Finally don’t sweat the little things, we had an agreement that you couldn’t carry a grudge through to the next watch. A couple of times I got grumpy about nothing in particular (just tired honest), we found a cold beer and an apology went a long way during the next watch change.

Good question. Water you drink heaps and it needs to be at hand, easy to find. Don’t skimp on water, I think we had 200L in the tanks and another 150L in the old ballast tanks. We washed up in salt water.

Food you need variety, we found that even though we ate well, we both lost around 7kg each. Fresh precooked was week 1. Fresh food we had to cook week 2. A variety of remaining fresh plus dry week 3 and dry food week 4. Fruit and veges early on are great. Paul had some pre-packaged “Easymeals” which were fantastic and very easy, but I’m not sure I could face another lamb shank and potato meal even to this day.

We did most of our cooking with either a large pot/steamer on the metho stove or frypan on one of those can stoves on deck, sort of like a bbq which went well with dips, cheese and nibbles. We made a point of eating the main meal together each day so the watch system stopped for an hour as we shared a beer and a chat. It was a highlight of the day that hour together, you really don’t see much of each other.

Using Email and the occasional sat phone call we both kept in touch with our families. We both had kids, Pauls younger than mine so keeping in touch was pretty important. We had a blog too which was fun to write, again it gave us something to look forward to. We had a chart on the wall which we marked off progress, we took a day at a time.

Starting felt good but finishing, wow what a feeling that was.

It’s the hardest thing I have ever done and one of the most rewarding. The Osaka welcome is beyond words, it is so good. We made new friends for life in the other competitors and the Hokko Yacht Club supporters. My only regret is that I didn’t sail home, but then 2018 is coming …….. 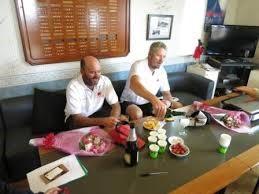 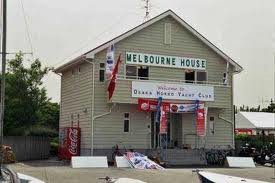 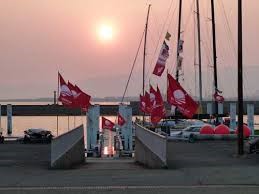