Rozinante II has won a protracted King Island Race from Melbourne to Grassy at the southern end of the Island, while John Newbold’s Primitive Cool took line honours in the time of 1 day, 3hrs 13mins 11secs, well outside the record he set in 2014 of 9 hours 50mins 21secs. 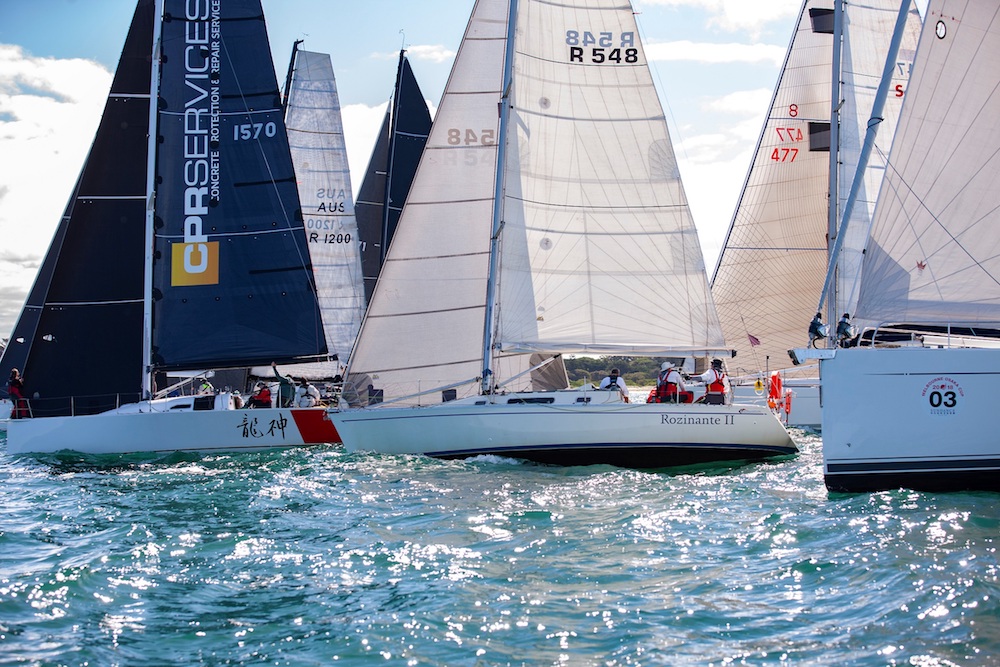 Competitors will long remember the Ocean Racing Club of Victoria’s 50th race. On the positive side were the crayfish and steak sandwiches at the end of a very slow race that took nearly double the time it normally would.

Rozinante II’s skipper, Andrew Middleton, joined the race last year as part of the rally, which the ORCV introduced to encourage more owners to step up to Category 2 racing.  Since then, he has gone on to regularly do Cat 3 races, but the King Island Race was his maiden Cat 2 race – and he won.

For the 50th, Middleton joined forces with Leo Cantwell, who usually skippers Magic Bullet and who also took part in the rally in 2021. 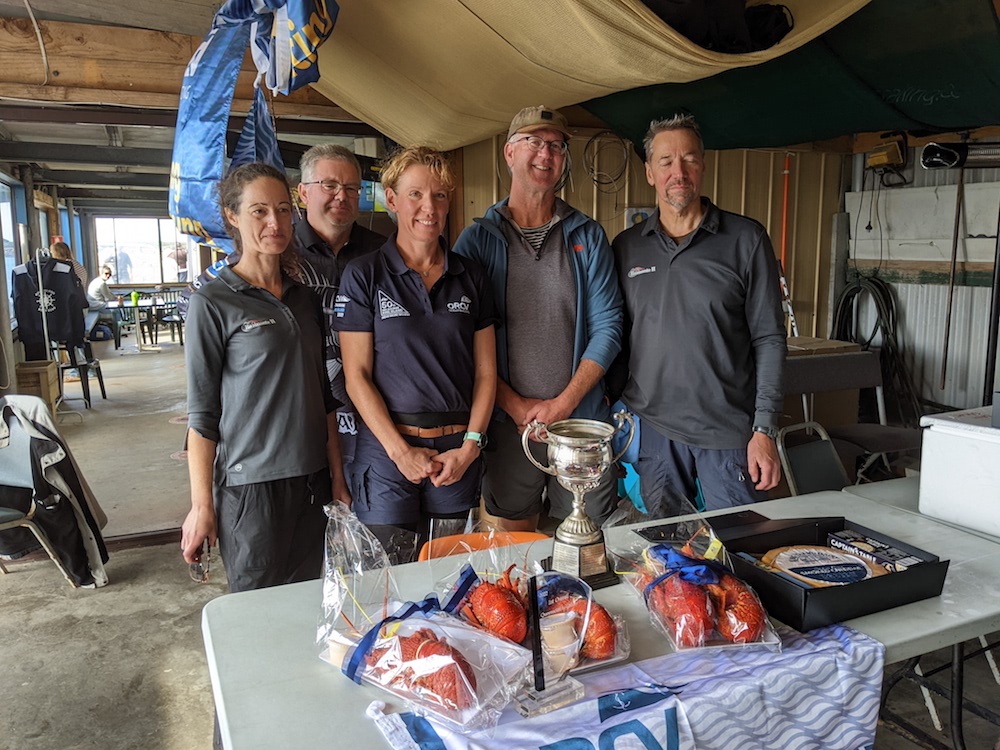 “I’d just like to thank the ORCV for presenting this opportunity. I think the rally was a great thing for us to do,” Cantwell said, clutching the King Island cheese package that formed part of his prize.

After spending much longer at sea than they all expected, Cantwell caused much laughter when he commented, “Some people have said this was a short race, but for me it was bloody long. It was a hard night, but it was a great team effort and I’m very pleased to be standing up here today.”

And a word from the elder statesman of the fleet, Laurie Ford, skipper of Spirit of Downunder), who also produced laughter: “The start was horrendous. I thought, ‘oh god, the boat’s going to get damaged and I’m trying to sell it’. But the latter part of the race was very enjoyable.”

Ford, whose sons Tim and Stuart, along with Paul Beresford, joined him in the Four + Autohelm division, continued: “I think I did my first King Island in 1992 and it hasn’t changed much!”

The 114 nautical mile race started in a 12-14 south/south-westerly under sunny blue skies at 3pm on Friday - glorious conditions. Primitive Cool got through the Heads first. Around midnight the wind dropped out. It remained light to the end and so favoured the smaller and lighter boats. 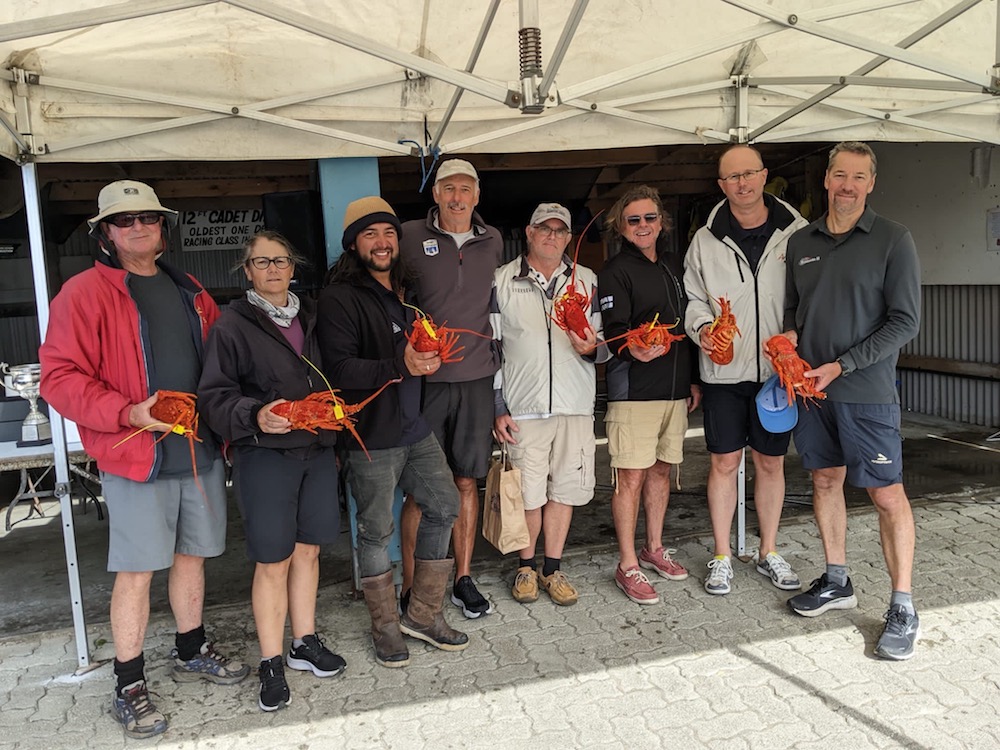 Some sailed the rhumbline course, while others took an easterly or western route. The east paid dividends.

Normally the fleet would have been finished by around midnight Friday night, and that would have been the case had the forecast from a week earlier held. However, the reality was starkly different and it was a little more than a day later when the first boats trickled in.

From midnight Friday the yachts were floating around in a negligible breeze and by Saturday morning nothing had changed. The scenario was there for all to see on the Blue Water Tracks race tracker. Boats not moving, some going backwards, others going around in circles.

At 8am on Saturday morning, Damien King’s Frers 61, Margaret Rintoul V, was just leading Brian Pattinson’s Don Jones 42, Gusto (being raced double handed by Pattinson and Bruno Carreto), both sailing well east of the rhumbline. Rintoul eventually retired, along with three others.

Extasea (Paul Buchholz), race record holder Primitive Cool (John Newbold), Hartbreaker (Antony Walton) and Carrera S (Gerry Cantwell), were next in the ‘chase’ if you could call it that, for line honours. Newbold was sailing close the rhumbline, while the other two were sailing west of the rhumbline. 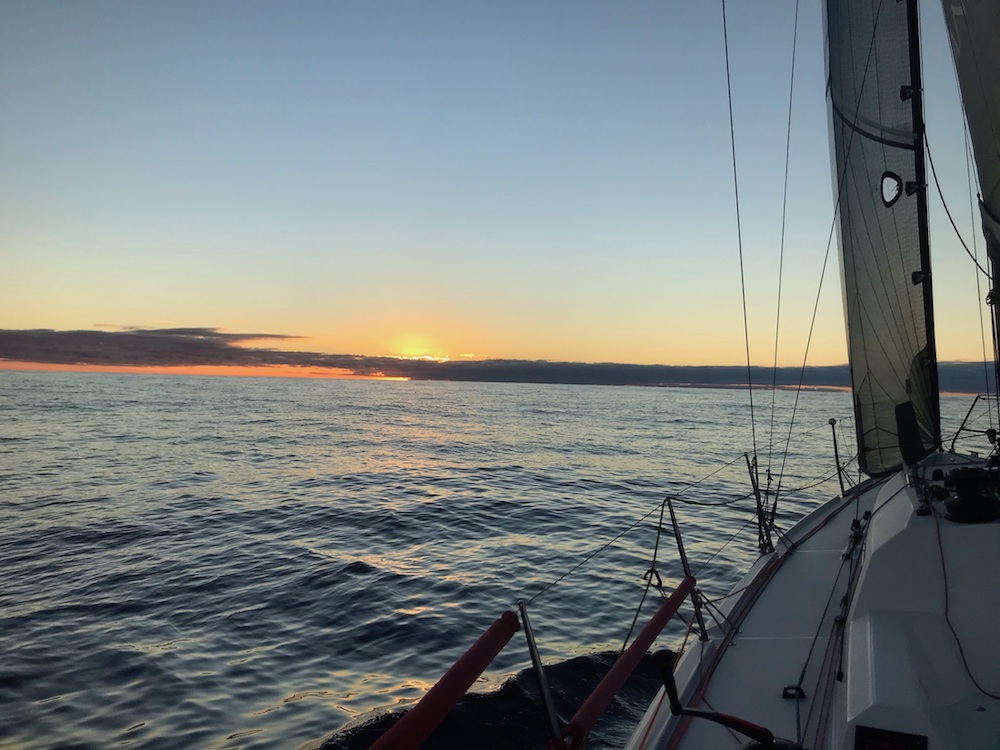 On Saturday morning, Rod Smallman said from mid-fleet, “We are in no wind. It’s been like this most of the night. We’ve got 1.2 knots of wind speed. Margaret Rintoul has done well; she’s sailed a good line. I’ve just done a weather route and it has us getting in around 2am.  The crays and steak sandwiches are looking good…

“It’s fun to be out at sea though. It was a beautiful sunrise this morning.”

Meanwhile, the prizes were due to be handed out at 10am. The crayfish were cooked and the King Island Boat Club had the steak sandwiches ready to hit the barby – a paddock of water and no wind standing between the parties.

The 50th King Island Race brought out many a past entrant, including Ian Lyall, who has competed in more than 20. 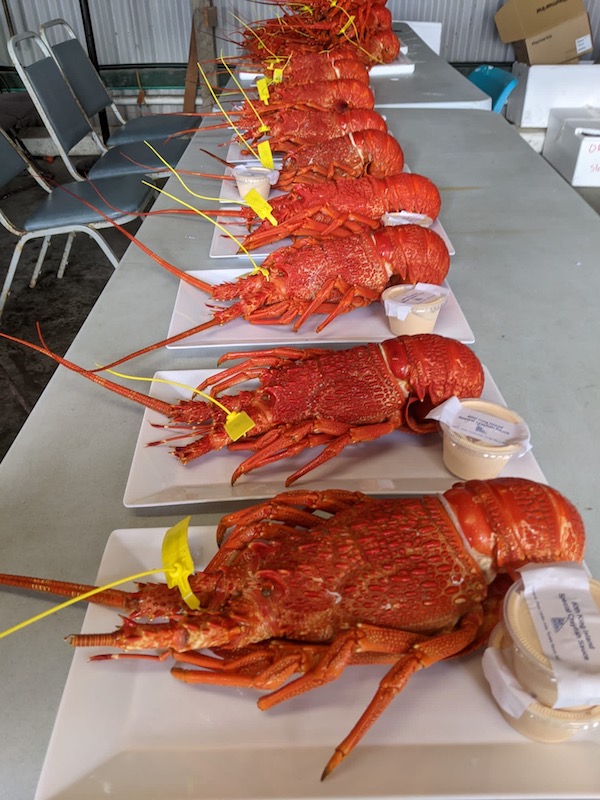 Rozinante II wins slow dance to Grassy in 50th King Island Race Rozinante II has won a protracted King Island Race from Melbourne to Grassy at the southern end of the Island, while John Newbold’s Primitive Cool took line honours in the time of 1 day, 3hrs 13mins 11secs, well outside the record he set in 2014 of 9 hours 50mins 21secs.   Start with Rozinante II centre stage - Steb Fisher pic - King Island Race Competitors will long remember the Ocean Racing Club of Victoria’s 50th race. On the positive side were the crayfish and steak sandwiches at the end of a...

Weather Predictions 50th ORCV Melbourne to King Island Race The 50th ORCV Melbourne to King Island will get underway tomorrow at around 3pm in a light SW breeze. It's predicted to be light winds for most of the race with some strategy required to avoid the dead patches during Saturday and the top of King Island. Hopefully, most will be in by early evening in time for the band and no doubt they will be ready for that great King Island steak sandwich. You can follow the fleet on the tracker here https://race.bluewatertracks.com/2022-orcv-50th-melbourne...

50th King Island Race: Forget sheep stations – entrants playing for crayfish   Forty-five entries have so far locked in for the Ocean Racing Club of Victoria’s 50th King Island Race, which starts at 1500 hours on 11 March off Queenscliff, with competitors playing for something far more important than sheep stations – crayfish and King Island cheeses. It’s a known fact that King Island produces some of the finest meat and dairy foods and is famous for its cheeses. Tasmania also offers the cleanest air on the planet, breathtaking scenery and the renowned warm welcomes of its...

Final Reminders – ORCV 50th King Island Race King Island has limited health resources so we ask you all to adhere to our hosts' requests as outlined below.  If you are unwell prior to departure, please STAY AT HOME. IMPORTANT: If any crew are exhibiting symptoms of Covid-19 upon arrival, please take a RAT test and stay on the boat.   Masks - Pack them The King Island Boat Club has asked us to wear masks on the tender service and when ordering food or inside the shed. Tender Service The water police are monitoring the event and the boat club have asked that everyone wears a...

50th King Island Commerative TShirt Click here to order https://www.trybooking.com/BXGJB You've done it, been part of it, why not get the TShirt to show it.We will be creating "to order" commerative 50th Melbourne to King Island TShirt / Cap packs for you and your crew.To make it simple, it will be a Shirt / Cap combination as shown. Orders close February 14th 10am.