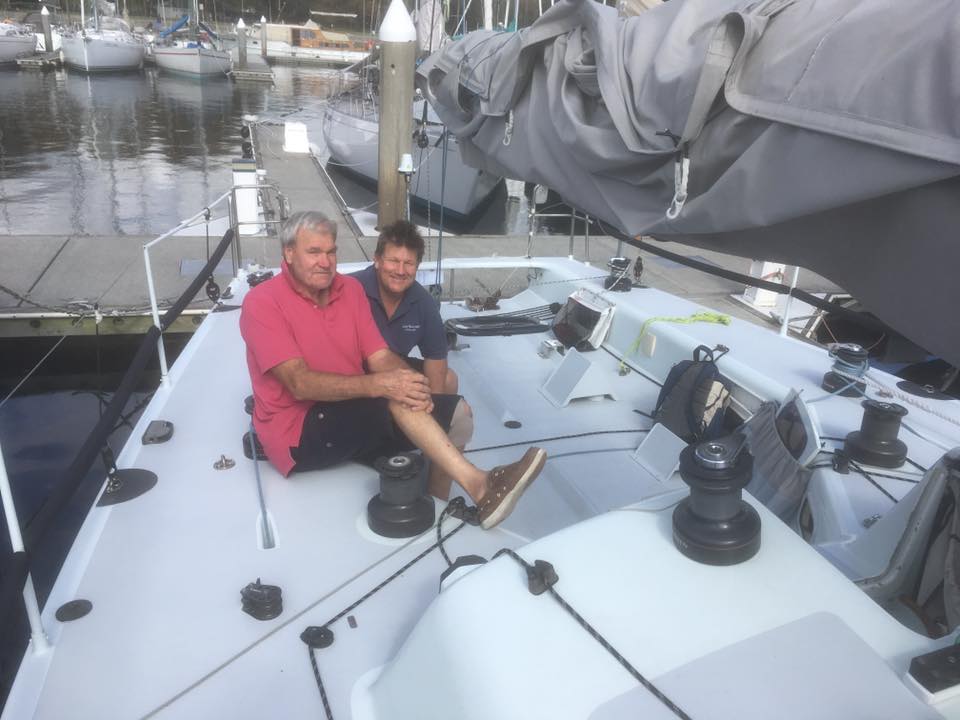 Co-Skippers Alan Lang and Peter Bush (better known as Changa and Bushy) are working hard to get to the start line in March 2018.  They have had the M2O on their ‘to do’ list for many years and previously acquired an Adams 50 and a Sayer 40 with the intention of competing in two previous events. Both campaigns were thwarted by heavy work commitments. “This time around we don’t plan to let anything get in our way!”

About the Boat: Last Hurrah!

Last Hurrah! was launched in 1994 as Valheru. The 13m design is by Greg Elliot and built in Launceston by Milner Yachts. Ian Milner did a remarkable job on the build and the vessel is as stiff and tight today as she was when launched.  The design was a little different than most boats to come from Greg Elliot’s design studio in that some of the usual slippery running and reaching features were compromised to deliver a more all-round boat capable of performing well in the Sydney-Hobart Race. “We have found the boat to be very quick on sprung sheets outfooting bigger boats and terrific to windward.”. The vessel underwent a half-life refit under the design and management of Fred Barrett to optimise performance from IMS to IRC- new keel, rudder and carbon rig with non-overlapping headsails and asymmetrical spinnakers. The result is that the boat was stiffer and a strong performer on IRC and keeps up with bigger boats on sprung sheets- a must for the Osaka course.

To set the boat up for Osaka, the Tuff Luff has given way to hanks, the rig has been completely refurbished-along with electronics, the underwater hull has been re-faired, the non-skid deck re done, sail handling has been simplified and a pilot and enhanced battery management system installed. Most importantly the colour of the hull was changed from ‘Jacarada’ (vibrant pink – not their favourite colour!) to white!!  Extensive modifications have also been made to the galley for easy meal preparation, coffee brewing and “happy hour” beverage making.

Changa and Bushy think that the boat is absolutely perfect for them, and they are extremely happy with the work up so far, including thinking long and hard about creature comforts, surviving endless 40 degrees in the tropics and weather forecasting 101!.  Finally, the name change to Last Hurrah reflects the crews’ ambition for the 2018 M2O!

Co-skippers Peter Bush and Alan Lang have been sailing together since the mid-eighties. They have raced together to Hobart 9 times and done numerous two handed races with the SSAA out of Sydney. Peter and Alan hatched their latest plan for the 2018 M2O while cruising back from the Whitsundays on a Grand Banks 36 in September 2014. The pair then spent more than 18 months scouring Australia for an appropriate boat, confining their search to yachts 38 to 45 ft LOA before settling on the Elliot.  This boat topped the list.  She was strong, stiff, and had a terrific pedigree, was proven (having competed in 9 Hobarts).  The half-life refit and optimisation and a near new sail inventory sealed the choice.

Peter Bush: Sailed skiffs as a teenager and began ocean racing aboard Casablanca with the 1978 Sydney Hobart.  Twenty years but 19 Hobart races later, having missed one year due to the birth of his son on December 30 , he ‘retired’ from ocean racing due to workload and related travel commitments. Now ‘semi-retired’ from business Peter has put aside the time to compete in the event.  Peter is a former Commodore of the Cruising Yacht Club of Australia and a life member of the Club and was chairman of the race review committee after the 1998 SHYR. He has logged over 110,000 miles in 25 years of offshore racing, including 15 Mooloolaba Races, 13 Gold Coast, 8 Montagu Island and 24 seasons of CYCA Long and Short Ocean Point Scores.  He has sailed in 3 Lord Howe Island races, one of them a being two handed event in his (then) 50 foot Adams Blind Panic. Most of his racing has been as skipper of his own vessels.

Alan Lang: Alan has spent most of his adult life on the water. He retired from his Clearance Diver role after 20 years in the Australian Navy only to take up a position with Waterways (now RMS) driving boats on Sydney Harbour. Alan was introduced to sailing through a navy mate in 1987, stepping on to Peter’s Peterson Two Tonner Big Schott during the winter series. Al took to sailing like a duck to water and found himself on the foredeck on Boxing Day for the slog south, and never looked back. Alan has an extensive sailing resume that includes over 80,000 nautical miles sailing offshore, with 9 Sydney Hobart races, 11 Gold Coast races, 8 Mooloolaba races and 15 seasons of CYCA Blue Water and Short Ocean Championships. Alan is a talented sailor and an exceptional seaman, no doubt due to his long stint in the navy and the rigor and demands of being a navy diver.
Alan is a member of Gosford Sailing Club and the SSAA.

Alan and Peter not only race together but always signed up for the return trips to get the boat back home to Sydney.  Invariably this meant just the two of them on board for most of the deliveries.   Prior to the 2018 M2O campaign they have clocked over 70,000 offshore miles together. The two of them also invest their time in preparing the boat for racing and have a good working knowledge of all things on board. The pair have meticulously prepared Last Hurrah! for the M2O and are confident in the boat’s equipment and most importantly the boat’s performance. As work up for the event, they delivered the boat short-handed to Sydney from Hobart where it was purchased and have also been sailing in ‘fully crewed’ events only six up- half the regular crew- as a means of learning the boat but having help on board to optimise performance. They are sailing two-up a day a week and will complete a return non-stop Lord Howe Island sail- about 850 nautical miles in the second half of the calendar year-they say ‘just to be sure we are up to it!’

“In spite of the fact that the boat is well prepared almost 18 months out, the ‘to do’ list still has over 100 entries! Most are 5 minute jobs that seem to each take an hour but others are more substantial. The plan is to have this list to zero by October 30, though every time we sail we seem to tick a few off and add a couple more!”

The co-skippers have a philosophy of keeping it simple. While there are a few redundant systems on the boat every decision focuses on finding the simplest solution and being self-sufficient and able to solve and fix problems as they occur- wherever that might be.
“We have found the information gleaned from former competitors to be remarkably valuable, particularly some of the things that are only likely to emerge in a long race through the tropics. For example, we had done a huge amount of research on power generation and management and were pretty certain we had the right solution. From previous competitors, it was clear we had missed the challenge of prolonged high temperatures below deck and completely re-though our solution as a result.”

Facebook:  https://www.facebook.com/lasthurrah2018
Email:  This email address is being protected from spambots. You need JavaScript enabled to view it.