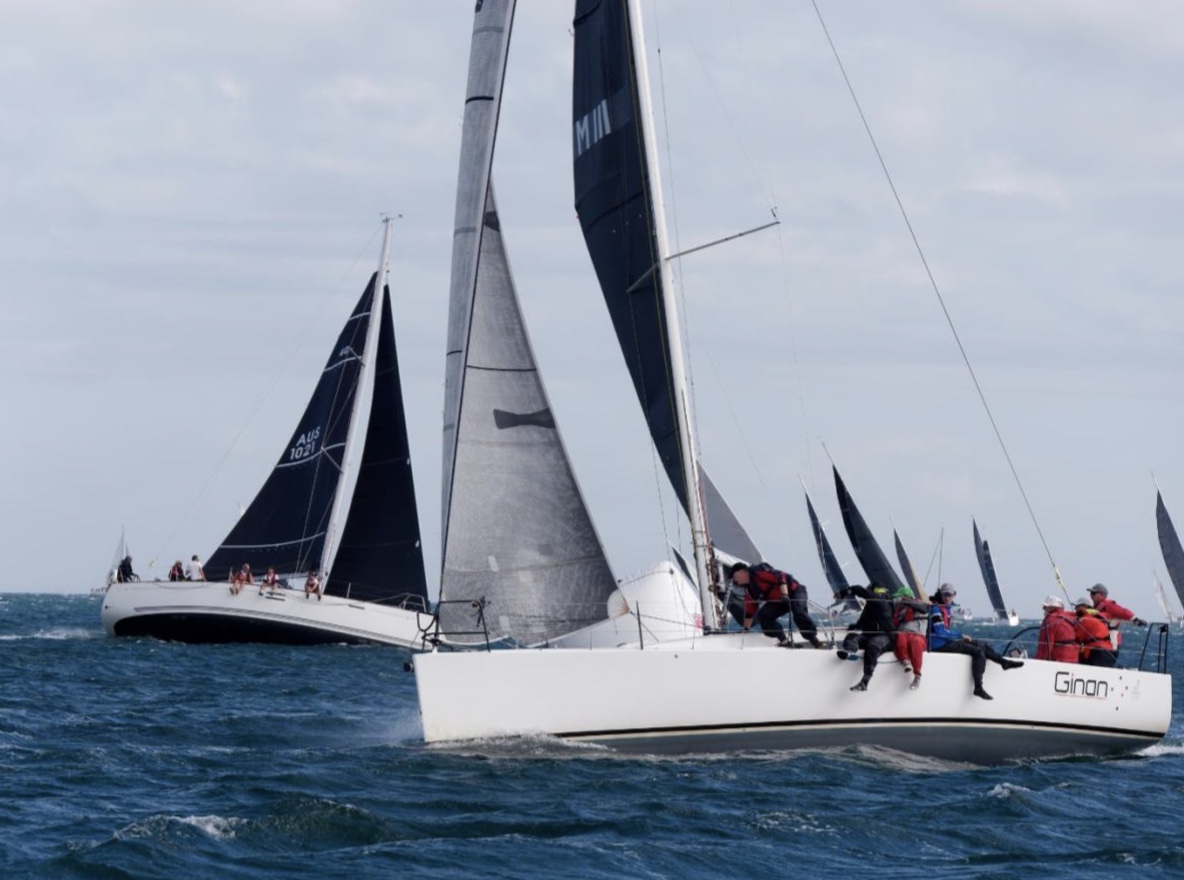 Expectations and entries are running high as the Ocean Racing Club of Victoria (ORCV) prepares to host its 50th Melbourne to Hobart Yacht Race, with Cam McKenzie and Nigel Jones’ recently purchased J/111, Ginan, marking the occasion by being the 50th entry.

McKenzie and Jones can boast a long and prosperous association with the 440 nautical mile race. It was the first ocean race for both and one they have won multiple times. It has culminated in their buying a yacht together in time for the 50th ‘Westcoaster’, as the race is familiarly known to yachties.

Jones’ first was in 1985 on Peter Sajet and Charles Mehrmann’s Farr 11.6 Freelance. He raced with the pair again on their Farr 40, Paladin, in 1989 and placed second overall. At 26 in the 1990 race, Jones skippered Paladin to an overall win. McKenzie, 21 at the time, was aboard for his first offshore race, forging a friendship and sailing bond between the two. 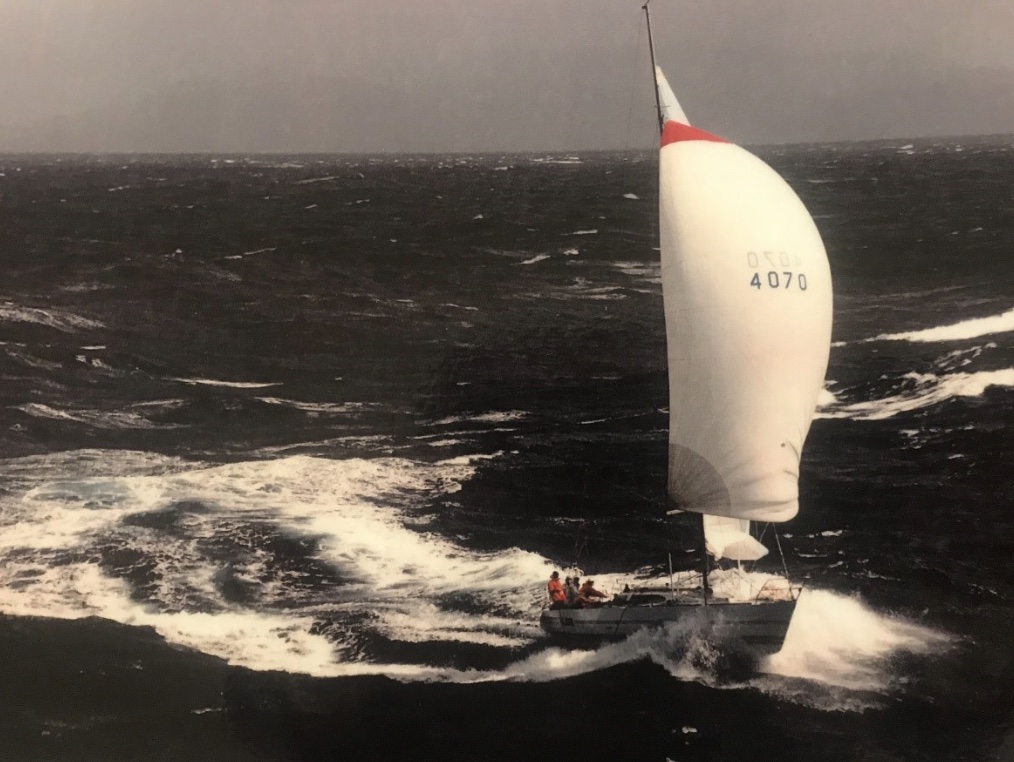 Their next Westcoaster was the 25th in 1996, when Jones skippered Cadibarra 7, owned and designed by his famous yacht designer father, Don Jones. They placed third overall in the record 65-boat fleet. 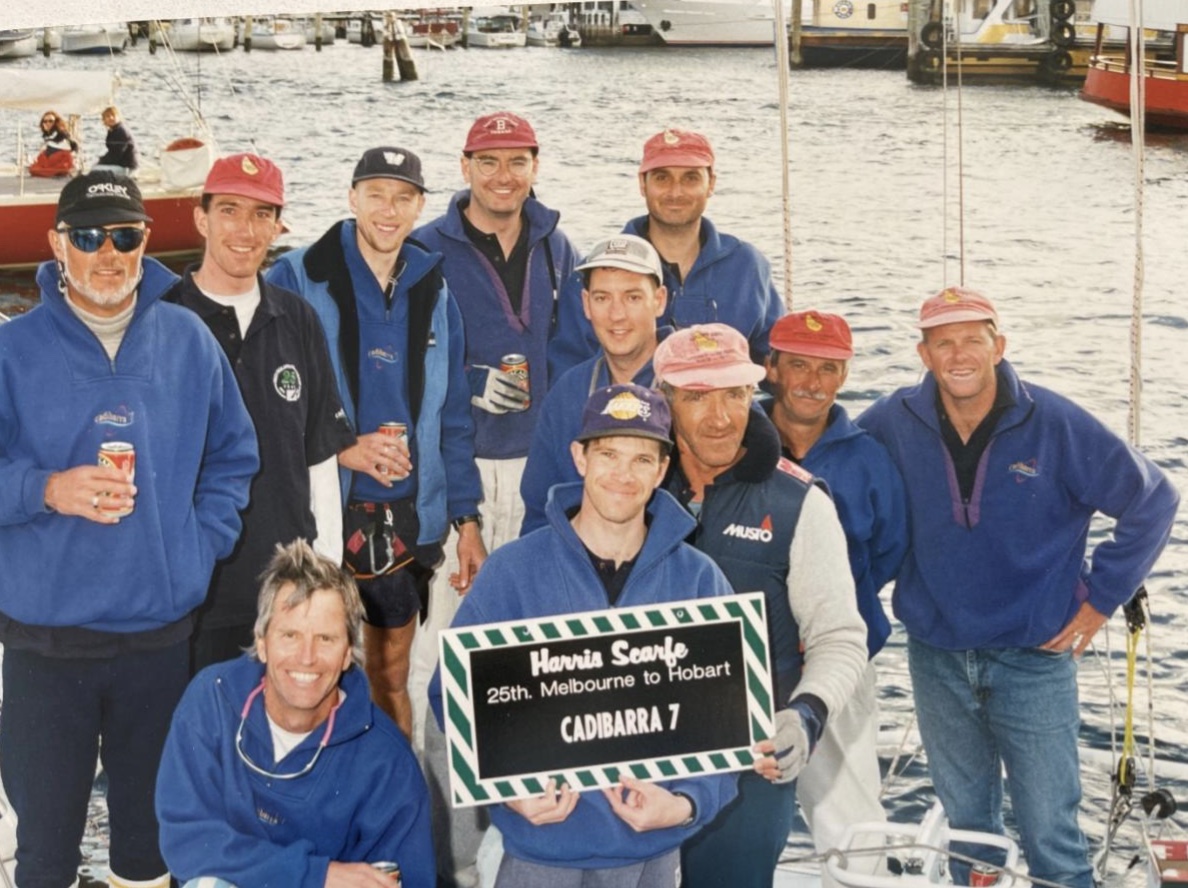 Nigel (centre holding the sign) and Cameron in the white cap behind, 25th Westcoaster in 1996

Jones and McKenzie next competed together in the gale-swept 1999 race, again on Cadibarra 7.

This decision ultimately paid off. Cadibarra 7 was the sole finisher and therefore the winner of that race. 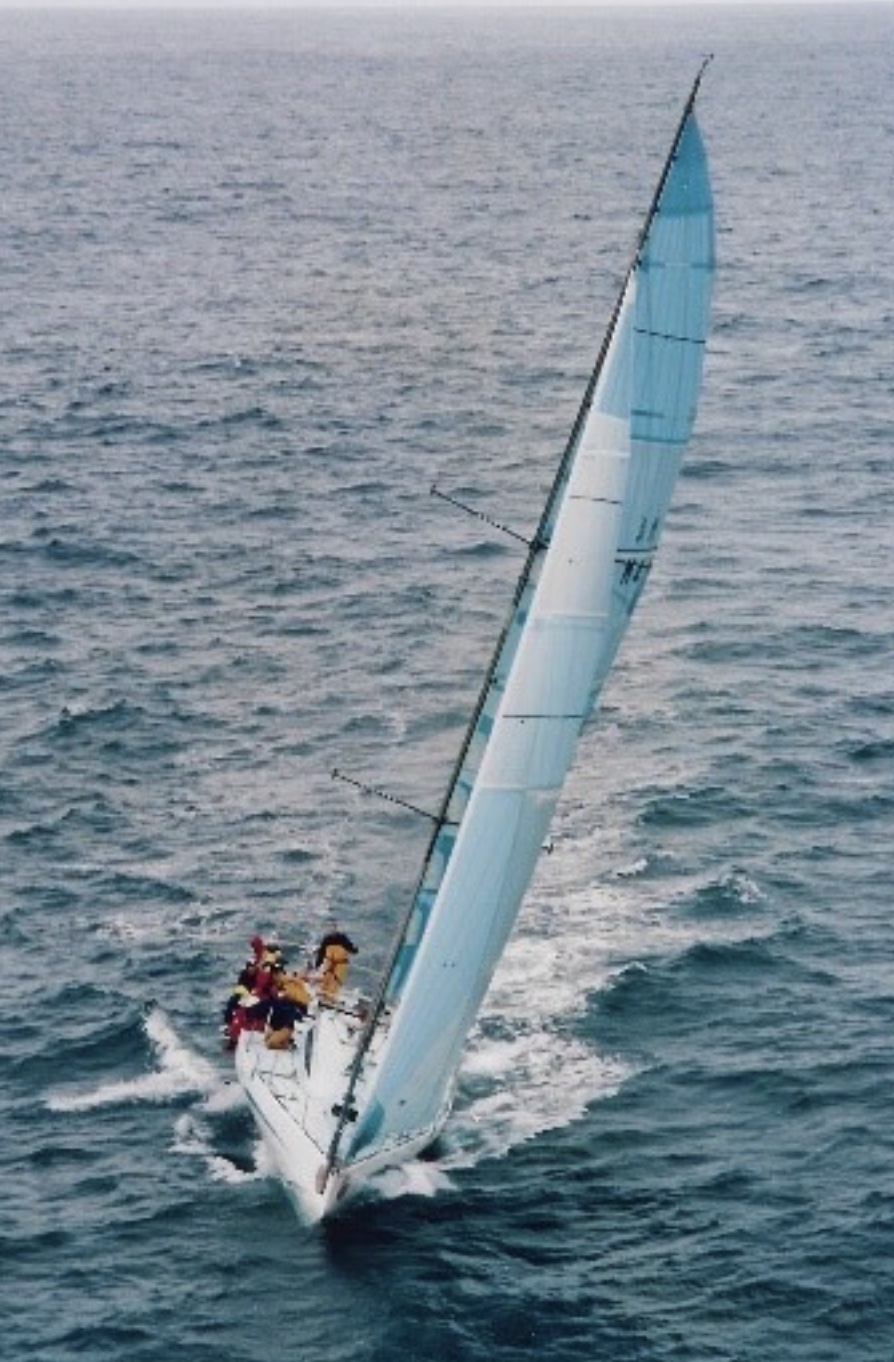 In between Melbourne to Hobarts, Jones and McKenzie kept busy sailing 10 Sydney Hobarts together. They now return to the Westcoaster with their own yacht Ginan. And continuing the legacy, McKenzie’s 18-year-old-son, Will, is to be aboard for his first Westcoaster.

“He is very much looking forward to the challenge and fulfilling an ambition of competing in the Melbourne to Hobart with his dad and his godfather Nigel,” McKenzie explains.

As to Ginan, Jones says, “We sought a boat that could be successfully campaigned offshore, inshore and fleet raced. What attracted us to the J/111, is that while it’s a relatively light boat, it’s designed and built for offshore racing.

“It’s a fun boat to sail, carrying large asymmetrical kites. It’s fast for its size, very well balanced and has the essentials and comfort below for overnight stays and short cruises. The design also has a successful track record in ocean races and regattas around the world,” Jones enthuses.

McKenzie, who says they are looking forward to the 50th, adds, “We are coming up to speed with the boat. We’re enjoying racing on Port Phillip against the other local J/111’s: Joust, Veloce and Playlist.”

The two will face stiff competition from an eclectic range of boats come the Westcoaster, John Newbold’s Primitive Cool and Robert Date’s latest Scarlet Runner among them.

Newbold’s Reichel/Pugh 51 has been successfully campaigned in Melbourne and Sydney over many years. Her claim to fame was winning the 2010 Rolex Sydney Hobart as Secret Mens Business 3.5.

The name Scarlet Runner is known far and wide. The latest of Date’s boats by that name is a Carkeek 43 launched in January. Fresh out of the wrapping, she placed fourth in the Adelaide to Port Lincoln Yacht Race and third in the subsequent Lincoln Week Regatta.

Distinguished by a menacing black hull, Date says the yacht was specifically designed as a Fast 40+ and her sisterships have delivered outstanding results on the super-competitive European circuit.

"We want to get ready to win the 50th Anniversary Melbourne to Hobart Westcoaster. We think this is the boat to do it in,” Date says. 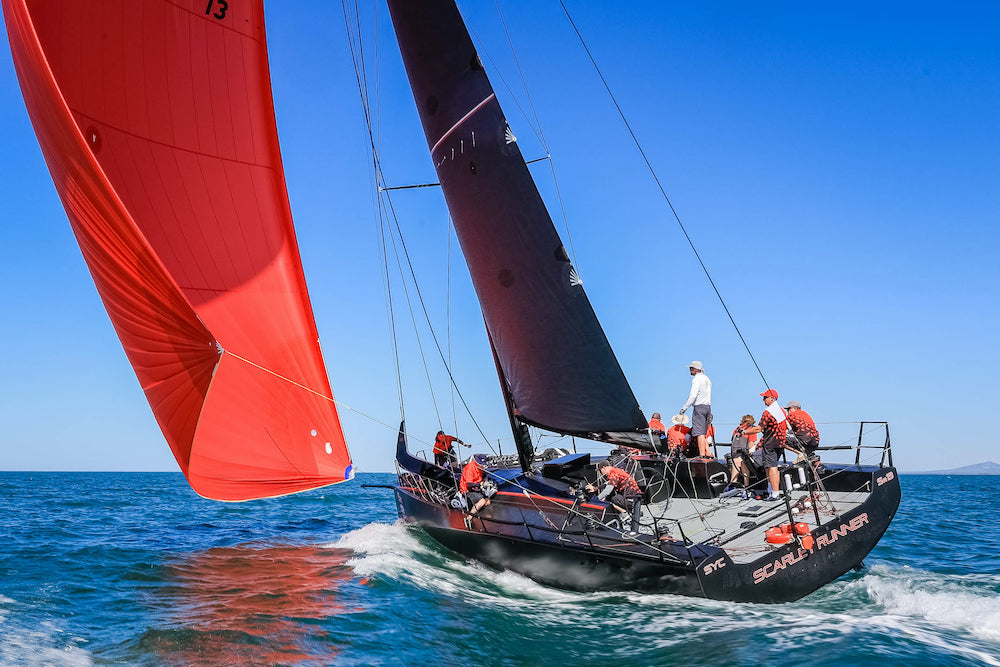 Other contenders include Wicked (Mike and Mark Welsh, which finished second overall in the 2009 Sydney Hobart and Arcadia, owned by 2021 Victorian Offshore Sailor of the Year, Peter Davison, which speaks for itself.

To start on 27 December at 12pm, the Melbourne to Hobart Yacht Race is organised by ORCV with the cooperating of the Derwent Sailing Squadron (DSS). The race typically offers tactical challenges and exposure to the Southern Ocean.

The course takes yachts from the start at Queenscliff,  through Port Phillip Heads, into Bass Strait, down the west coast of Tasmania, up the River Derwent and to the finish line at Battery Point in Hobart, providing some of the most gruelling racing in Australia.

The Category 2 race is open to monohull fully crewed, double-handed and 4 + Autohelm yachts with the winner to be determined under the AMS rule.

Cam & Nigel have a great passion for ocean racing and have had lots of amazing sailing experiences and opportunities provided to them through the generosity of owners of the boats they have raced on and feel that now is their time to give back and provide such opportunities to others to experience the thrill and joys of ocean racing.

Nigel, Cam and their crew are very much looking forward to taking part in the 50th running of this great race, the Melbourne To Hobart.

So Nigel & Cam, what's behind the name Ginan?

A regular question we are being asked is what does Ginan mean and why did you give the boat this name? The name Ginan comes from the Wardaman people, traditionally living in the region south-west of Katherine in the Northern Territory. Ginan is a Wardaman word for a red dilly-bag filled with songs of knowledge and Ginan is the fifth brightest star of the Southern Cross constellation formerly called Epsilon Crucis. The Southern Cross helped the First Australians to navigate this land and has been used by navigators for centuries to find the location of the south celestial pole.  All of Don Jones’ boats were named Cadibarra after Lake Cadibarrawirracanna in South Australia, the meaning of Cadibarrawirracanna is “the stars were dancing”, hence we feel there is a nice synergy between the names.