Friday 16 December at 7 pm, Maritimo TP52, struck horrific conditions on her journey south, cutting short the delivery trip to Sydney.  Battling these conditions, for a total of 18 hours and they pulled into Coffs Harbour.  Maritimo 11 was thoroughly inspected for damaged to her hull and instruments. When the floorboards were removed, some minor cracking of the secondary tabbing on the longitudinal frame in front of the mast was discovered.

For safety concerns Maritimo withdrew its TP52 entry and pursed the option of its Schumacher 54 yacht. 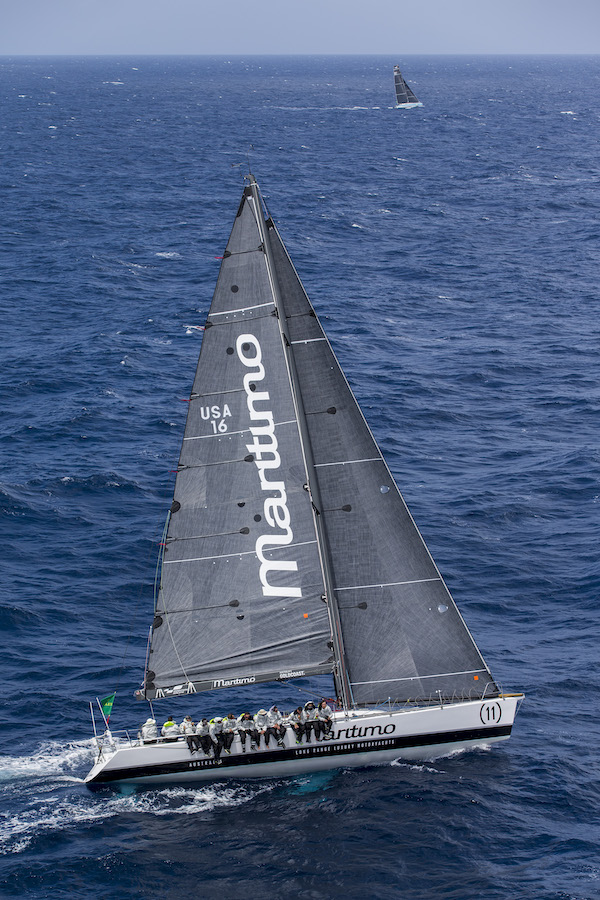 After all avenues were exhausted to enable Maritimo to enter a spare boat, Maritimo received the news yesterday that they will not compete in this year’s Rolex Sydney Hobart Yacht Race, following the final determination of the International Jury last night.

The International Jury deliberated on the case between Maritimo, represented by skipper, Michael Spies, and the RSHYR Organising Authority (OA), and has made its decision: Maritimo 11 (USA 16), the Schumacher 54 will not be allowed to replace the damaged TP52, known as MEX 952.

Maritimo entered both its primary and spare yachts but withdrew its spare USA 16 on 1 December after suggestions from the OA.

When MEX 952 was damaged enroute to Sydney over the weekend, Maritimo sought to replace it with the original entry, the Schumacher 54 known as USA 16.

After consideration of the facts, the International Jury cited the conditions of the Notice of Race (NoR) which “makes a clear and unambiguous rule that a determination of the OA as to the eligibility criteria for entry is final and binding”.

“The OA holds the rights to the Race as well as a significant duty of care. The Jury recognises this duty of care of the OA and is guided by the NoR 5 in that the decision regarding eligibility should be at the sole discretion of the OA.

Speaking in response to the decision, Maritimo founder, Bill Barry-Cotter said, “Of course we are disappointed, and Skipper Michael Spies and crew will be extremely disheartened given their preparation and anticipation of the 2022 edition of what is considered the world’s most challenging yacht races.

“Albeit a bitter pill to swallow, we accept the Jury’s decision and we will instead look to compete in the 50th Melbourne to Hobart “Westcoaster” race in USA16, whilst looking ahead to preparing the team’s TP52 for  a busy racing calendar in 2023, and challenging for the 2023 Rolex Sydney Hobart Tattersall Cup . May this year’s Race be extremely competitive, and all yachts involved sail safely to Hobart.”

The Maritimo 11 (Schumacher 54) left Hope Island today at 10 am and head out on a 860 nautical mile sail to Portsea that will take 4-5 days.  This is a demonstration of the never say die attitude and belief in the competitiveness of their boat and the Maritimo highly experienced crew. There is a race record up for grabs of 1 day 17hours 28 minutes 59 seconds set in 2008. It is the 50th anniversary of the Melbourne to Hobart Westcoaster.

Jeremy Walton (Race Director on the 50th Melbourne to Hobart “Westcoaster" said, ”It's the race to do, being our 50th time down the Westcoast of Tasmania and we moving fast to work with Michael and his team to get the boat entered and all the compliance work done to make sure they are on the 50th Melbourne to Hobart start line come December 27th."

About the Melbourne to Hobart "Westcoaster"  - It is a tactical race that challenges not only the skipper and navigator but the whole crew.  The race (435 nautical miles) takes yachts across Bass Strait and race down the beautiful and remote west coast of Tasmania before rounding Australia's most southern point in the Southern ocean and heading to Derwent and Hobart.

For information on the 50th Melbourne to Hobart “Westcoaster” contact Delma Dunoon - This email address is being protected from spambots. You need JavaScript enabled to view it.   0419 388018