Hundreds of spectators crowded Portsea Pier and Port Phillip Bay today to watch the start of the 50th Anniversary Melbourne to Hobart Yacht Race, hosted by the Ocean Racing Club of Victoria, in magnificent conditions on Port Phillip Bay.

Under iconic Australian sapphire skies, the 49-yacht fleet participated in a sail past in recognition of the 50-year history of the race, which is affectionately known as the Westcoaster, and described by others as the K2 of Australian sailing, before focusing their attention on the start sequence.

In an emotional tribute to race founder, Sir Donald Trescowthick, his son Adam, accompanied by ORCV life members, supporters and sponsors, took three cheers on behalf of Sir Donald who was key to ensuring the longevity of the race over its first 20 years.

Race Director, Jeremy Walton, got the 49-boat fleet away cleanly in the celebratory race.

In a glamour spinnaker start, Maritimo, a Schumacher 54 skippered by Michael Spies and a latecomer to the event, set the pace off the start line leading the Division One boats in a light five to eight knot north easterly breeze across Port Phillip Bay to Queenscliff.

Maritimo showed no signs of weariness after the almost 1000 nautical mile dash down the east coast of Australia to reach the start line in time and was quick to establish a lead flying their massive asymmetric spinnaker, but the boat sailed into light air into near Queenscliff Pier which cost them the lead. 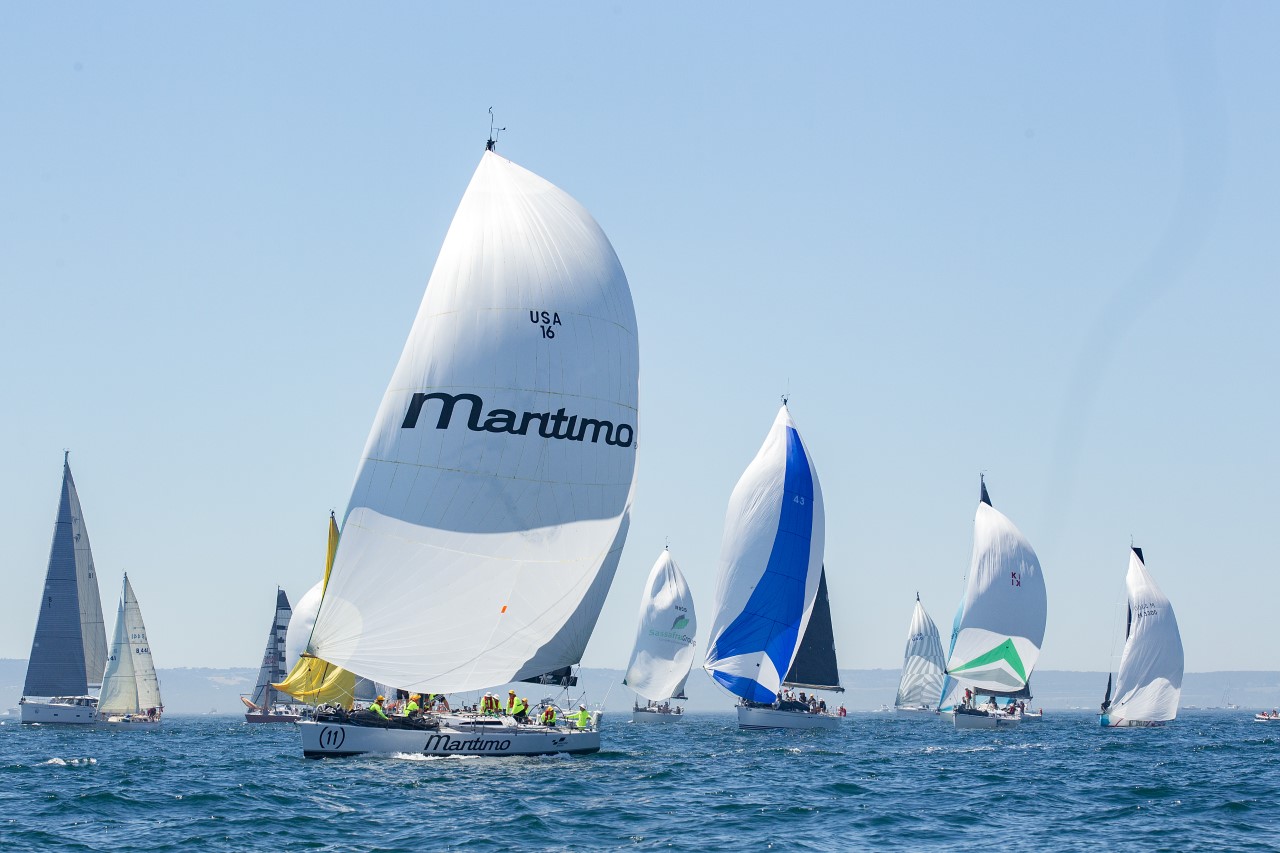 Rob Date’s new boat Scarlet Runner, a Carkeek 43 built specifically for the Westcoaster and Date’s 13th boat of the same name, started at the pin end, hugged the Portsea and Point Nepean shoreline, dodged the maritime traffic and found a perfect lay line to the first mark, taking the lead off Maritimo, rounding first and took off from there.

Date, the Sail Captain at Sandringham Yacht Club and a member of the ORCV, will be thrilled with the start of his first Westcoaster race, winning the Port Phillip Sea Pilots

Perpetual Trophy for the first boat to exit Port Phillip Heads, passing through an imaginary line between Point Lonsdale and Point Nepean.

“We got the boat ready to win the 50th Anniversary Melbourne to Hobart Westcoaster – we think this is the boat to do it in,” said Date, in the weeks before the race.

Scarlet Runner is a Fast 40+ high-performance boat with the design delivering top-notch results in the super-competitive European circuit but will be tested when the stronger westerly winds hit the fleet on the run down to Hobart. 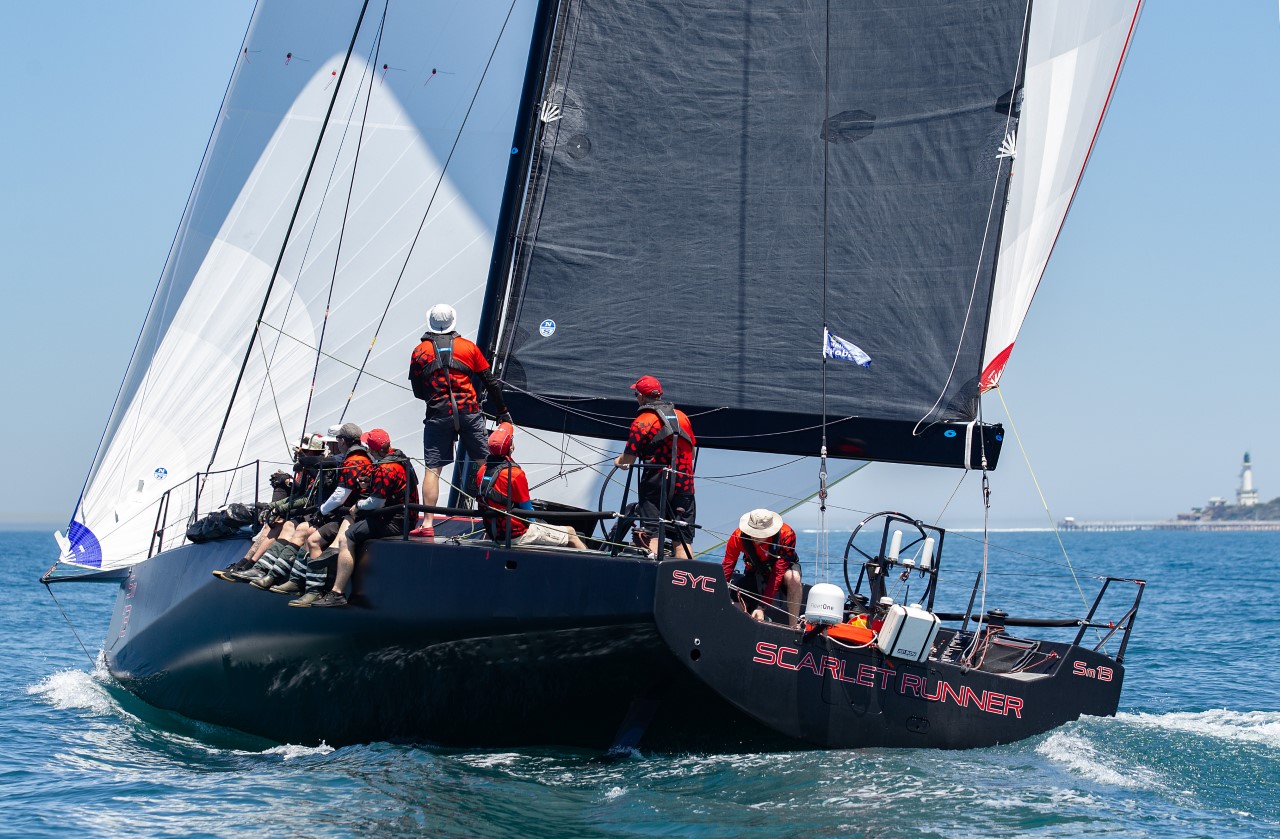 Several boats will be gunning for the race record including Damien King’s Frers 61, MRV which sailed comfortably into second place with Gerry Cantwell’s Marten 49, Carrera S leaving Port Phillip Heads in third place, and Maritimo back down the fleet in ninth.

Tony Walton, skipper of another line honours favourite, the RP46 Hartbreaker, spoke about the race before the start today.

“This is a significant race for us – different scenery and different weather. We expect it to be a fast race and hope to be halfway down the West Coast by the time the change hits, but this boat cruises very well with a triple reef and a storm sail up. We’d like to beat the race record but let’s see how it goes,” said Walton.

Grant Dunoon, the ORCV Past Commodore and skipper of Blue Water Tracks, is sailing his Moody 54 in the double-handed division with ORCV Life Member, Neville Rose, and expects a wet but quick race to Hobart.

“If the boats get to King Island before midnight they will slip through before the current changes and starts to flow to the north, but the middle and slower boats will get a wet ride after midnight between King Island and Cape Grim, if its wind against current. But from six tomorrow morning, when the westerly comes in, the short sharp waves will ensure a wet ride for almost everyone,” said Dunoon.

The fleet sailed into glassy conditions on Bass Strait but will be bracing for a westerly change of 25 to 40 knots on Tuesday morning, with the race record of 1 day, 17 hrs 28mins still in sight.

The prestigious Heemskerk Perpetual trophy will go to the handicap winner on AMS.

The 435 nautical mile Melbourne to Hobart Yacht Race, organised by the ORCV with the cooperation of the Derwent Sailing Squadron, started off Portsea Pier at 12pm on 27 December.