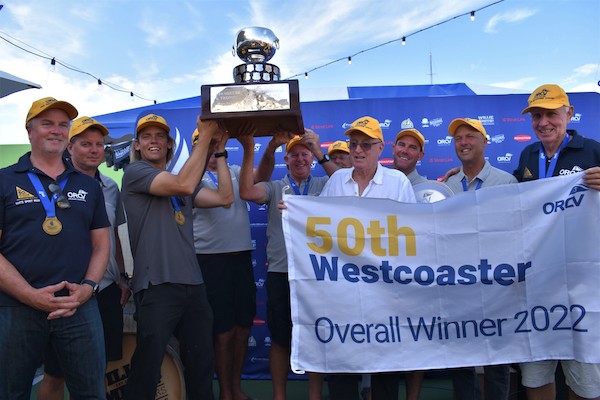 Maritimo 11 has been through the highs and lows of racing over the last few weeks, but capped 2022 off perfectly by winning line honours and every handicap category in which they were entered, in the 50th anniversary Melbourne to Hobart Yacht Race.

AdvantEDGE, skippered by Andrew Jones from the Port Dalrymple Yacht Club, was second across the line and Damien King’s MRV was third.

Michael Spies, the skipper of Maritimo 11, accepted the prestigious Heemskerk Perpetual Trophy today which is awarded to first place overall on corrected time on AMS, the handicap category which had the largest number of entrants in this year’s race.

Maritimo 11 was also awarded the Wrest Point Abel Tasman Trophy as line honours winner, took out Division 1 on ORC and overall, won on IRC overall, and was awarded the City of Melbourne Perpetual Trophy for first on corrected time on performance handicap.

Skipper Michael Spies was full of praise for the event and the competitors and regards the race, which is affectionately known as the Westcoaster, as one of the world’s great ocean races.

“Until you have actually competed in it, you don’t realise what a challenging race it is, the love that there is for the race, and the history of the race… it is truly one of the world’s great ocean races,” said Spies. 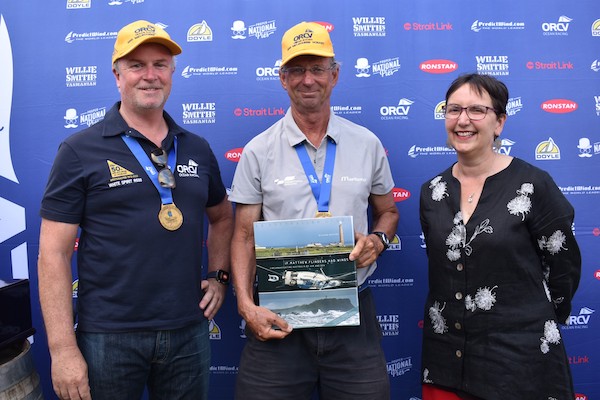 The Zeehan Trophy was awarded to Murray Spence as the navigator of the line honours winner, Maritimo 11.

The Edward Henty Perpetual Trophy was awarded to Ginan, skippered by Cameron McKenzie from the Mornington Yacht Club, for second place overall on AMS.

Patriot, skippered by Jason Close from the Sandringham Yacht Club and a first timer down the West Coast, was awarded the Batman Perpetual Trophy for third place overall on AMS and was happy with Patriot’s performance.

“We had a really good race and had good fun. The race had its challenges, but it wasn’t as windy as forecast. I also don’t think I’ve ever sailed an offshore race on the one tack before…the wind just stayed with us from the same direction and followed us around the bottom of Tasmania; we two-sail reached up the coast and cracked sheets to the finish,” said Close.

Close was full of praise for Maritimo 11, which he described as a ‘two-sailed reaching-machine’ and skipper Michael Spies. “Maritimo is narrow with a long waterline length, sailed by an extremely good yachtie. The two-sail reaching just suited them - if it had been a bit deeper, there would have been other boats in the play,” said Close.

Close is keen to participate in another Westcoaster. 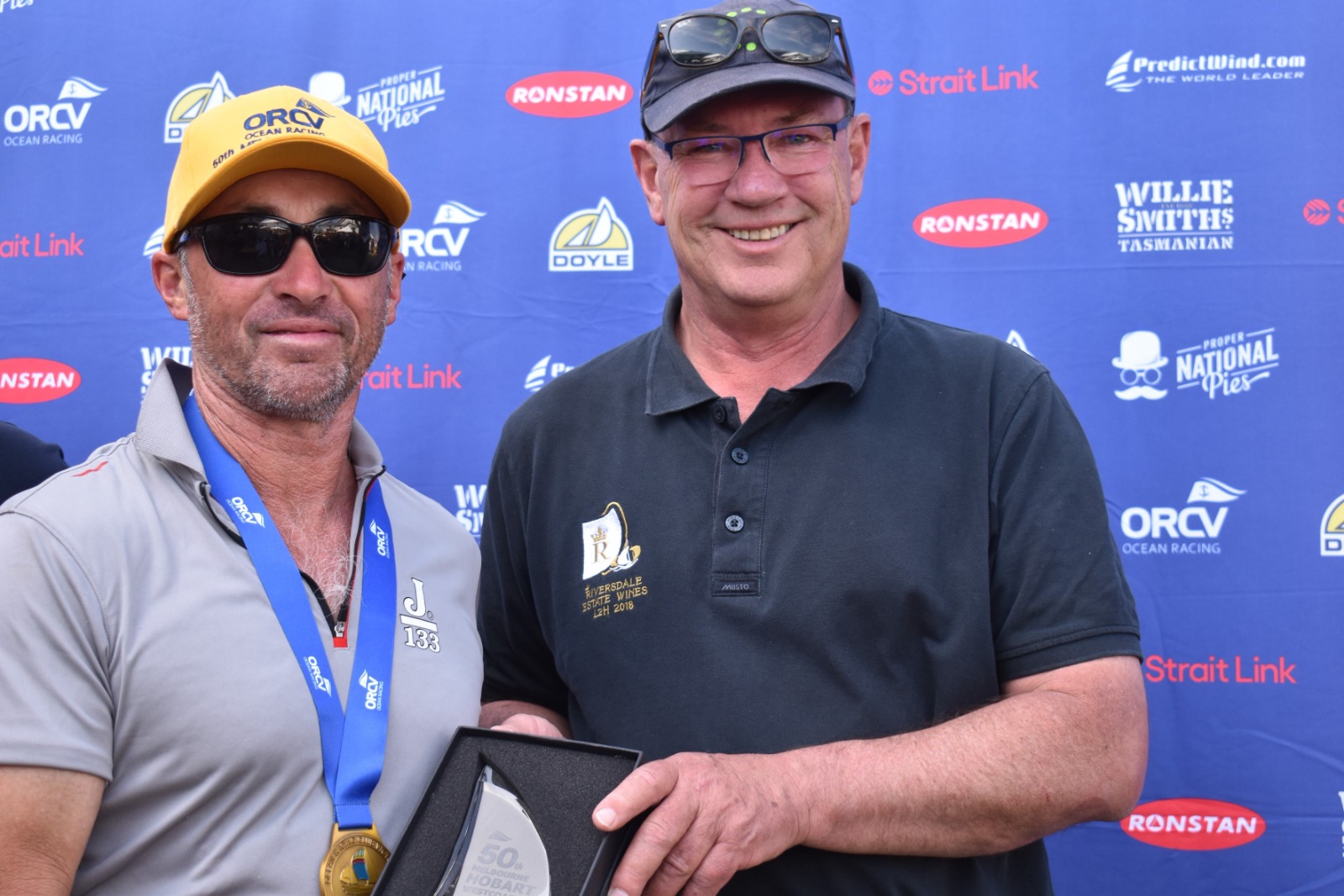 Alex Toomey and Andrew Hibbert from the Royal Melbourne Yacht Squadron, co-skippers of Ryujin, were awarded the Double-Handed Perpetual Trophy for their win in that category with Unprecedented, skippered by Andrew McGrath, winning Division 2 Double Handed.

In Division 2 of the Unrestricted Monohull group, Unprecedented had a terrific race winning on AMS and ORC, while How Bizarre, skippered by Peter Amarant from the Royal Melbourne Yacht Squadron, took out first place on performance handicap.

The Alan Collins “Rookie Skipper” prize was awarded to Clare Olding, who was selected by the Race Committee as the best performing ‘first-time’ skipper. 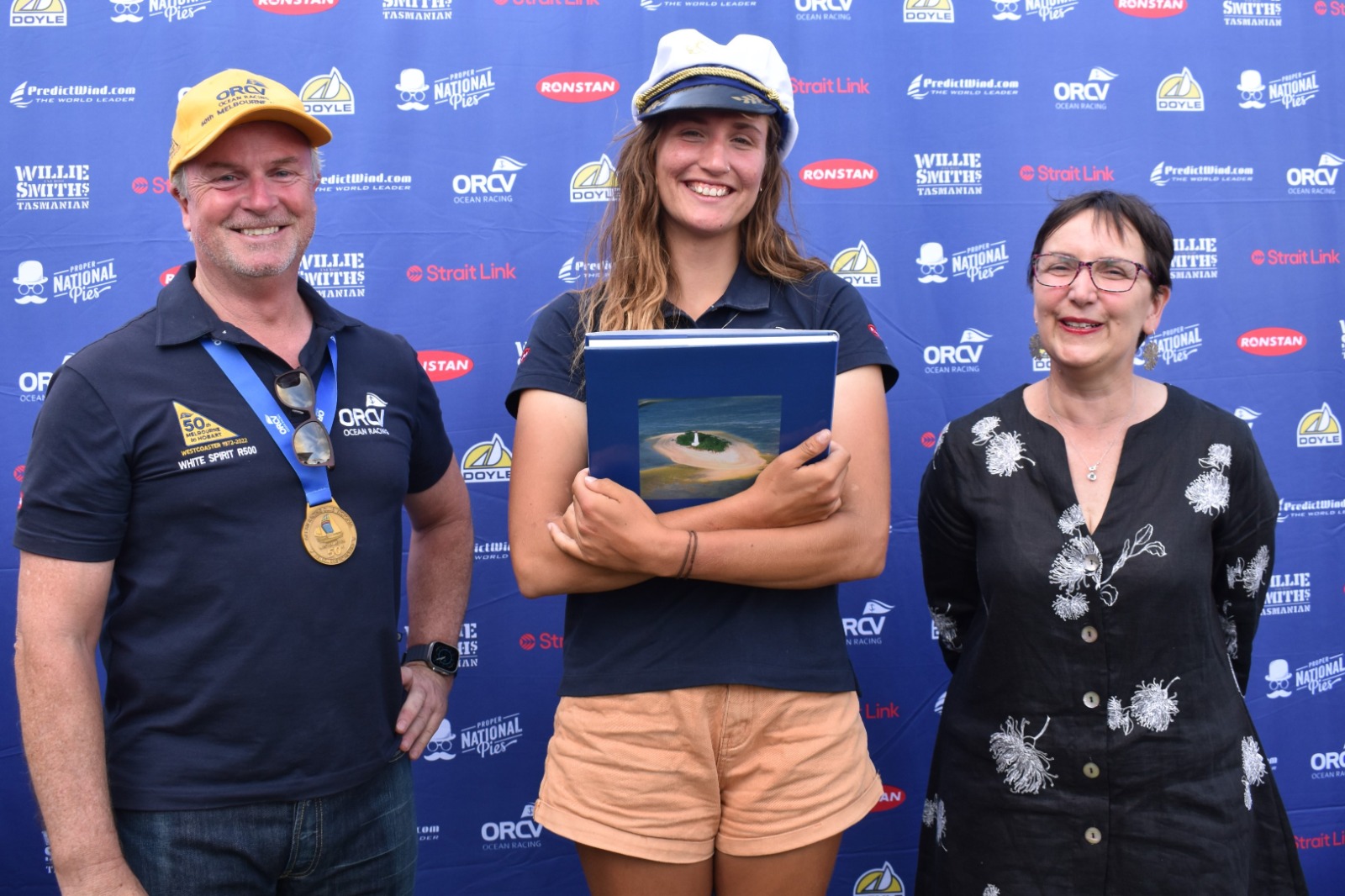 ORCV Commodore, Cyrus Allen, is delighted with this year’s event.

“The 50th Melbourne to Hobart has been a magnificent success, bringing together teams from across the country to compete in one of sailing’s iconic events. From the excitement of the race start at Portsea Pier to the cheers of the crowds lining the dock in Hobart, the Westcoaster continues to be a race that both challenges and rewards those prepared to give it a go. And we’re particularly happy on this 50th anniversary to see an increasing number of talented young women amongst the crews and skippers and look forward to attracting even more sailors to this unique event in future years,” said Allen.