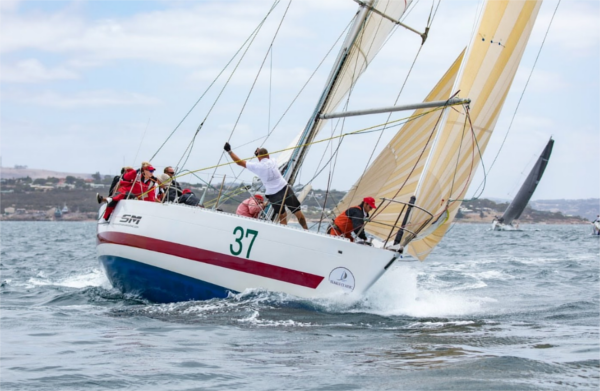 Bacardi, the famous Peterson 44 from Sandringham Yacht Club, has entered the 2019 ORCV Winter Series. It is a welcome return back to the ORCV for Bacardi. A famous boat in its own right, it has competed in 30 Sydney to Hobarts, finishing 29 of them with a number of class wins and a second overall in 2006. Bacardi has been owned since 2006 by Martin Power, a once famous touring car racer in his own right. We assume that is where his competitive streak comes from. The pride is evident whenever you talk to “Marty” about the boat, he has endless stories and has weathered many a storm in her.

There wouldn’t be too many senior sailors on the bay who haven’t sailed on Bacardi or competed against her over the years, she is a famous and likeable boat. “She’s like the proverbial old axe,” Marty once joked, “She’s had four masts, three engines, three rudders and two decks, but the hull is the same.” Saying that she is still competitive.

Brett Averay has partnered with Marty over the last couple of years bringing a wealth of experience as well as practical hands-on skills. Brett’s quiet but confident helming and tactics, his situational awareness and his ability to coach his crew, plus a lot of hours reconditioning the systems on the boat, have seen Bacardi return to full competition.

Under Brett and Marty’s leadership, Bacardi picked up a 1st place in Div2 AMS and 2nd PHS in the 2017 Lincoln Regatta and a 1st place PHS, 3rd AMS in the 2018 Lincoln Oceanrace, both against strong fleets. What makes this achievement really impressive is that it was done without the latest sails. Many of Bacardi’s sails are literally falling apart with one being tossed into the skip after the second race this year. The big, tired, overlapping headsails together with the running backstay, masthead rig and displacement hull are quite a contrast to other competitors with their carbon masts, square top mains, latest technology brand new sails and planning hulls.

“So what do you need to be successful ?”, we asked Brett. “A good attitude, a good crew and sail smart. And never forget sailing should be enjoyable, yelling doesn’t help.” Bacardi is going to be one of many older yachts competing in the upcoming ORCV Winter Series, but don’t take your eye off her as she may just surprise you.  Great to see her out competing and ocean racing again.