“Best day I’ve had sailing” was how Damien King, co-skipper of the Frers 61 ‘MRV’ sailing double handed summed up the day after taking the overall win in a fleet of 47 yachts in Saturday’s Ocean Racing Club of Victoria (ORCV) Winter Series destination race to Geelong. 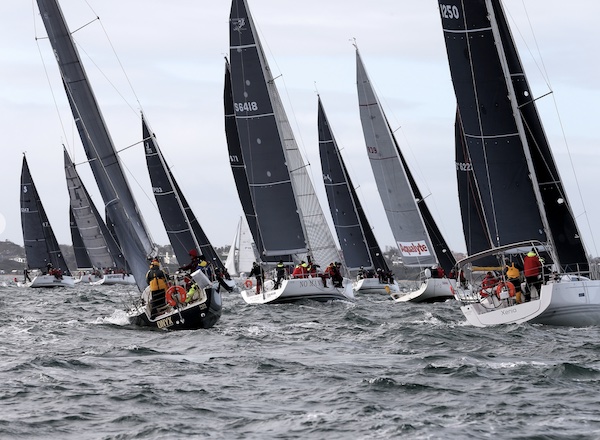 The last race in the series saw the Lord Warden’s Trophy being awarded to the overall series winner, the Beneteau First 44.7 ‘Another Chapter’, skipper Greg Clinnick.

There was just over one minute between King’s MRV and Jason Close’s J133 Patriot on corrected time (AMS) with MRV setting a cracking pace for the duration of the thirty-four nautical mile race.

“MRV does well upwind” with a laugh King explained “we were so lucky with the weather, being able to set the main head sail and not have to change sails throughout.” “The new hi-tech sails are lighter but for the size of MRV they can be still super heavy for one person.”

“A few days ago, I thought I was crazy considering sailing MRV in the race double-handed,” explained King. “We’re not really set up for double-handed racing and I found I was racing around doing bit of everything including navigation. Crazy? Maybe but I can say that my co skipper Grant Allen and myself had an absolute ball.” Expanding on that King explained “We have hydraulic winches in the main locations' and standard in other places. Grant ended up hand steering for most of the race and I think we’d both say we were lucky not having to put up any more sails.”

In very close racing at the start, MRV stayed amongst the leaders to the first mark and extended her lead over the thirty-four nautical mile course to take line honours, twenty-four minutes ahead of the next arrival, Tony Walton’s Reichel/Pugh 46 ‘Hartbreaker’. 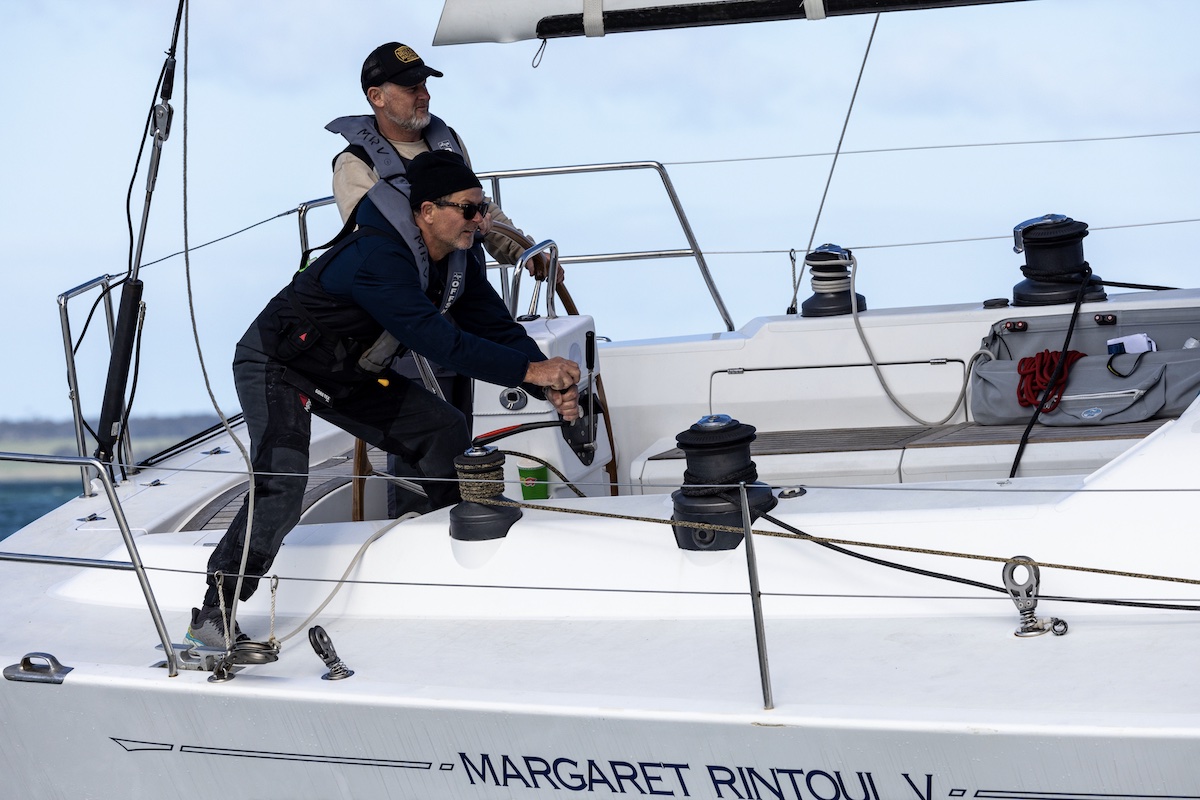 With the overall series win in sight, Greg Clinnick skipper of the Beneteau First 44.7 ‘Another Chapter’ knew they needed a solid race as they trailed James Russell’s Adams 10 ‘Surprise’ by one point. “We were hoping for a fair bit of upwind and positioned ourselves in the middle of the line at the start and were in the top 4 over the starting line and around the first mark.” explained Clinnick. “We chased that boat speed all the way constantly, where the main sheet wasn’t still for more than 30 seconds for the whole race.”

“Having bought ‘Another Chapter’ during Covid, we are only just learning how to unlock her secrets this being her first full series of racing.” Clinnick went on “We were looking to move to a cruising style boat but still keep that racing advantage, with Another Chapter being built for the Beneteau racing team back in 2004 and why it has a carbon mast and deep keel.” 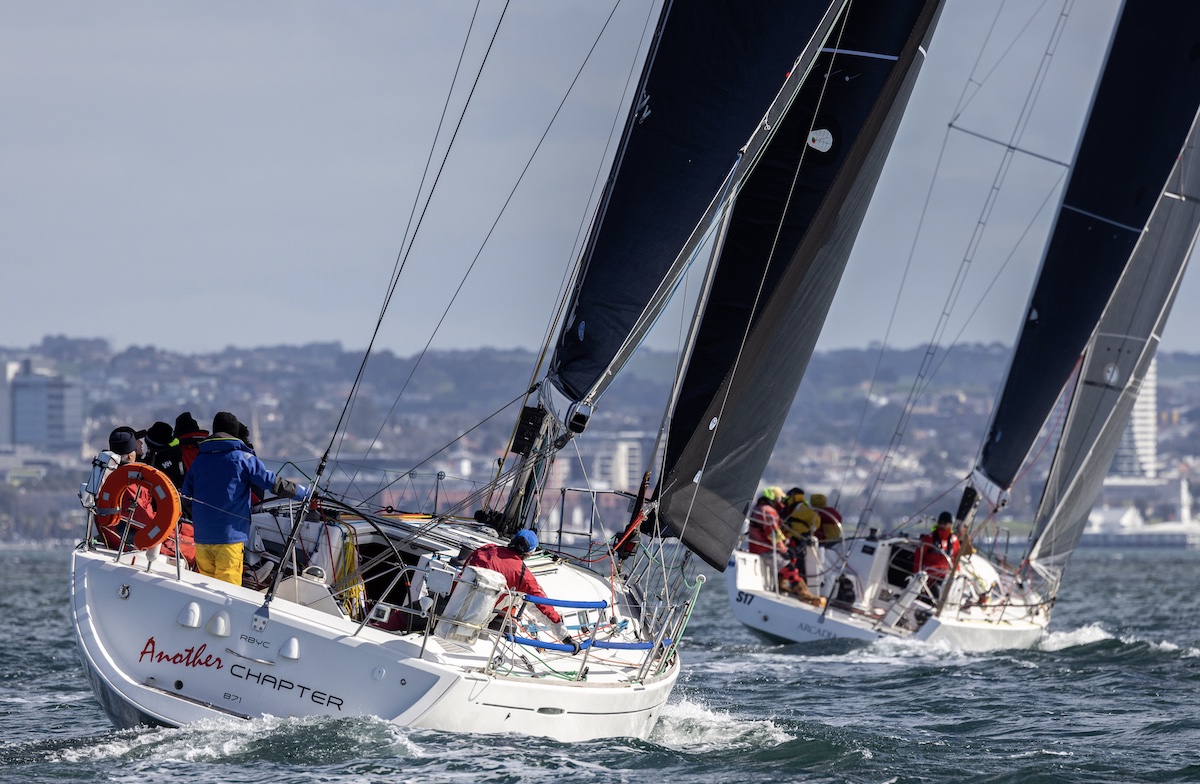 With 2019 being the last time we’ve raced to Geelong, ORCV Commodore Grant Dunoon and skipper of Moody 54 ‘Blue Water Tracks’ commented “It was great to see in the fleet representation by all the bay yacht clubs, coming together to enjoy some strong match racing and Geelong our destination. Royal Geelong Yacht Club turned on the hospitality with berthing, meals and music for allowing crews to share a great evening together.” Dunoon went onto to say “It will be a major milestone with the 50th race to Geelong running in 2023.”

Next race on the ORCV Calendar is the West Offshore Products Coastal Sprint 1 on September 17th with entries open here https://www.orcv.org.au/about-the-series

Melbourne's hottest race in the coldest month  “Best day I’ve had sailing” was how Damien King, co-skipper of the Frers 61 ‘MRV’ sailing double handed summed up the day after taking the overall win in a fleet of 47 yachts in Saturday’s Ocean Racing Club of Victoria (ORCV) Winter Series destination race to Geelong. 47 yachts from around the bay at the start Photo Dave Hewison The last...

Re Sail Women Skipper & Navigator Race & Novice Race We are re -sailing the Women Skipper and Navigator's Race at the same time of the Novice Skipper's race when the fleet returns from Geelong on August 21st. The recent Women Skipper's Race from Blairgowrie started in great conditions but soon sailed into a foggy wind hole.  So let's get the race underway again.  For those...

Patriot the clear winner in a race of snakes and ladders

Patriot, the clear winner in a race of snakes and ladders.  Local knowledge as the winds softened gave Jason Close, skipper of the J133 ‘Patriot’ the advantage to win overall in a fleet of 34 yachts in Saturday's ORCV Winter Series 30nm race to Blairgowrie. The mixed fleet competing in the racing and cruising divisions started out just after 9.30 am using a shortened course start line off...