Planning for a Race

Earlier this year the ORCV asked us to provide comments in a possible race to the Pacific.  I started to imagine escaping Melbourne in winter and going somewhere warm, possibly Noumea.  I thought I'd share my thinking and planning.  I am intending on participating in this event when it's announced and, as part of my initial preparations I’d like to know what to expect. I use a number of resources but for the initial investigation, I am predominately interested in what weather conditions to expect and how long it might take. 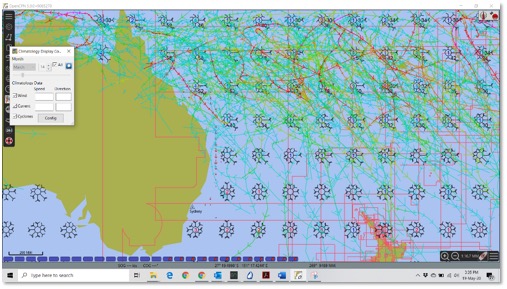 I use an app called openCPN which is free to download and use, and I have found it a great resource as it has the ability to forecast a route using the seapilot chart data. The seapilot charts show the average winds to expect in the area by month so you’ll find 12 charts for each area and they are free to download. The openCPN also has a feature of showing the tracks of every cyclone since 1972 which is incredibly helpful when planning. The image above shows part of the South Pacific and the squiggly lines above 250 S are the paths of all the cyclones. The image (right) shows one of the wind roses in more detail. Here off Cato Island between Australia and New Caledonia in April, you can expect a predominant wind from the SE of force 4 (11-16kts) 65% of the time and the 1 in the middle indicates to expect calm weather 1% of the time. 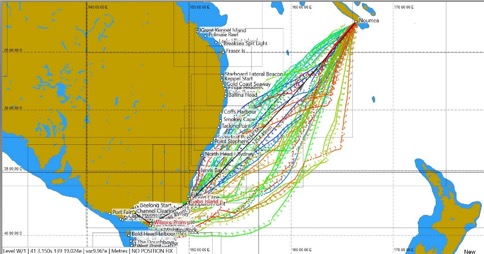 You can also create a route in this app which will show you the best way to go to take advantage of the prevailing winds. Now I think it important to point out that these are expected conditions only but it’s a great place to start and when you see a wind rose with 65% SE winds, that’s significant.

I now know what to expect in regards to prevailing winds and cyclones and I’m starting to formulate a plan. Next, I go to my Expedition app for some historical weather routing. I have 10 years of historical wind data for this area but in this instance, I will only use the last 5 years and I will create 7 routes per year around my expected departure date for 5 years giving me 35 historical routes. The reason for the 7 days per year is to cater for at least one weather cycle passing in the temperate zone. Note that there is a 600nm difference from the extreme left to the extreme right, which I think you’d agree is substantial. Given this difference, I’m likely to analyse each year to see if I can find a correlation with the ENZO cycle (El Niño, La Niña) and maybe the Maddern Julian oscillation but that’s for another day.  But in these early days of preparation, I know that there are significant extremes for possible routes.

The table above shows my max, min and mean times which is a great help for food prep. I have learnt from experience that you pretty much only eat half of what you think you’ll eat and in this instance I would probably only cater for 6 days, knowing it’s most likely to last 8 or 9 and then bring some dried stuff just in case in does take 12 days. The good thing about the dried stuff is the long use-by date so I’ll probably just bring the supplies that I didn’t use in last years’ Sydney to Hobart which were leftover from the year before Melbourne to Hobart, which were leftover from the previous year’s Melbourne to Osaka………

Now, to the table below which is a combination of the 35 routes and gives me a pretty good indication of what to expect. In past races, this information has not only proved very helpful but I have found it to be very accurate.

The table shows in time(hours) how long to expect in different conditions. For example, expect to spend 8.02 hours in 14kts wind (TWS) at a wind angle of 50o (TWA). I have colour coded it to identify the differing expectations in the race which, as you can see, will be predominately cracked sheets too tight reaching in 10-16kts. If I’m racing I might be off to talk to my sailmaker about this and even if I’m only cruising, it gives me a real handle on what to expect.

Also looking at things on a more macro scale I see that I’m going to be sailing in 2 distinct weather regions, the temperate belt of the ferrel cell and the tropical belt of the Hadley cell. The convergence of these two weather cells is known as the horse latitudes and is around Newcastle to Coffs Harbour depending on the time of year and, in my opinion, are more challenging to cross than the ITCZ (doldrums).

From my initial investigations with the sea pilot data and the historical weather gribs I now have the makings of a plan but there is much, much more to go. I need to understand when to hug the coast or when to go offshore, when to go east or when to stay on the rhumbline. But for now, I know the likely time it’s going to take and the likely conditions and I now know where I need to look to get a better understanding of which of those routes is going to be the best option in 2022.

Race preparation and learning "how to" start now.  I'm running two courses, "Learn the basics" in Expedition Software and "You've got the basics, What's next?" for those that would like to make a start and have a hand up on that process with Expedition Software.  If you gear up and practice and you are really in to win, we invite you to then come and join Will Oxley in the Masterclass of Navigation.  You can book in via https://www.orcv.org.au/training/navigation

Keep an eye out for the new race announcements from the ORCV and yes let's escape to somewhere else.  Keep in touch by following the ORCV on Facebook, Instagram or on the website.

for the Navigation Courses