Short and Sweet to Test and Try

“A great initiative” was the astounding feedback from both the seasoned ocean racer Peter Davison of Arcadia and the newcomer Aaron Marlow and crew onboard Ca Bouge as they reflect after completing the first ORCV Coastal Sprint to Western Port and return.

“Short and sweet is what our skippers had been asking for allowing them to test and train crew in the close confines of the coast”. said Justin Brenan ORCV Sail Captain as he explained the concept and reasoning behind the launch of Coastal Sprint format last weekend. “With the Coastal Sprints the ORCV now offers a genuine Category 3 Coastal Championship open to a broad range of skippers whose boats and crew are not yet ready for competition in our longer Category 2 events. “

“These races, being 1 day and 50nm allow you to setup your crew and run your boat like you would any longer race. It allows you to test and check your crew have the right clothing and gear to keep them dry and warm. You don’t get that opportunity on a longer race and if you’re not prepared correctly a longer race can just be miserable”. said Aaron Marlow on his Inglis 38, Ca Bouge “We setup watch and shifts based on 3 on and 3 off, just like a longer race to once again give that overall experience.

“My crew are largely new to the ocean, so these shorter races are a great way to give them that experience, giving them a taste for the ocean and yes I’m planning to do all the coastal sprints then hopefully some longer races too. I’m happy to be an advocate for what the ORCV is going here and I hope we can get 50 boats on the start line over time.”said Aaron.

“With my main crew onboard and a few newcomers, the Coastal Sprints gave the opportunity to further train and practice, plus an opportunity to try some new crew. If ocean racing isn’t your thing, you don’t often know until you’ve experienced it. Fifty nautical miles means your only 3 hours from somewhere and better than finding it to be not your thing and suffering for two to three days” said Peter Davison a seasoned ocean racer on the Archambault 40 R C, Arcadia. “We still found a lot of variety especially up near the Western Port end.” Peter ended by saying, “I’ve done a lot of ocean passages and for those who wish to give ocean sailing a go will find these races perfect for just doing that. One day racing means you have time also to do more on a weekend and yes I even fitted in another race today here on the bay”. 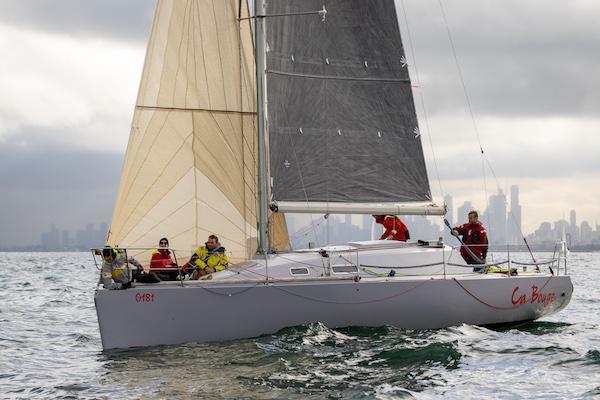 We congratulate Peter Davison on Arcadia 1st on IRC and PHS, 2nd on AMS. Justin Brenan 1st on AMS and 2nd on IRC and PHS, Aaron Marlow on Ca Bouge 3rd on PHS, Mersea 3rd on AMS and Maverick 3rd on IRC and 1st on Double Handed. Full race results for the West Offshore Coastal Sprint – Western Port and return can be found here