NEAR RECORD FLEET FOR 2022 COCK OF THE BAY YACHT RACE

The Ocean Racing Club of Victoria’s (ORCV) Cock of the Bay Yacht Race, or Boxing Day Dash, is living up to its reputation as a hugely popular 21 nautical mile post-Christmas race with over 100 boats entered in this year’s event, in what could be a near record fleet for the classic race.

Port Philip Bay will be awash with colour as the 100-strong fleet race past major bayside locations, putting on a magnificent show for spectators and sailors alike.

The race starts at 10:30 on Boxing Day (Monday 26 December) near Station Pier in Port Melbourne and will pass close to St Kilda Pier, Brighton Pier, Sandringham, and the Hampton foreshore, finishing at Mornington Yacht Club, providing plenty of vantage points for spectators relaxing along the shoreline.

It will be hectic on the water from the get-go with plenty of pressure piled on the long start line. Winning the start in such a large fleet will be tough so expect skippers to claim and defend a lane well before the gun, while a few of the adventurous ones might try a port tack approach to find a hole on the line.

Ari Abrahams will be hoping for a late Christmas gift and a clean start in his pursuit of a third overall race win on the trot for his X yacht, Xpresso, however, he will be facing fierce competition from the large and diverse fleet. 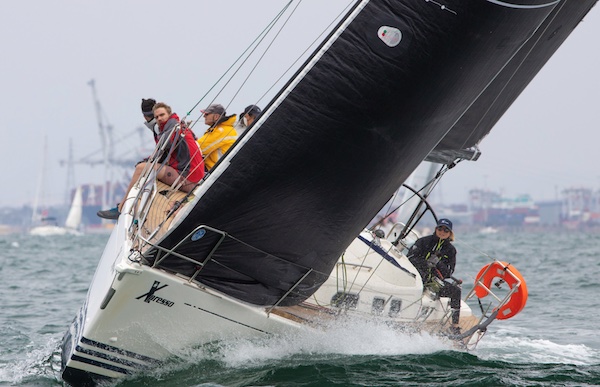 The Cock of the Bay Yacht Race serves as a feeder race for this year’s 50th Melbourne to Hobart Yacht Race which starts at 12 noon the following day, so Abrahams can expect some tough competition from the anniversary fleet which will be consolidating boat procedures and refining their crew work before their run down to Hobart.

The weather forecast is for a light southerly breeze of around six knots at the start of the race, which is likely to favour the lighter sports boats, building to 15 to 20 knots as the race progresses. Particular interest will focus on various races within the race such as the five Beneteau First 40s fighting tooth and nail: Mark Welsh’s Wicked, Jim Leckey’s Oobleck, Nick Foa’s Protagonist, David Morrell’s Just Chillin’ and Ashley Trebilock’s Bandit.

The fleet will include several Melbourne to Hobart contenders from Tasmania with top performances expected from Brent McKay’s Bakewell-White Z39, Jazz Player, which has good form against the mostly Victorian fleet, and Richard Grant’s Knoop 39, Cromarty Magellan.

While the Tasmanian sailors may be in good form, there’s nothing like the benefit of local knowledge, so watch out for the street smarts of Mark Nicholson and his crew on the J121, Javelin, while Steve Twentyman’s Hanse 505, Shimmer, will give the race a good shake especially as the wind builds.

Contenders in the double-handed division include ORCV Past Commodore, Grant Dunoon sailing the Moody 54 Ds, Blue Water Tracks, also a Melbourne to Hobart contender, Dan Morrow’s 11 Metre One Design, Affirmative Action, which placed second in the Festival of Sails in both 2021 and 2022, and Greg Laing’s Beneteau Oceanis 43, Letoile.

The race record for monohulls was set in 2020 by Paul Buchholz's Cookson 50, Extasea in a time of time of 4 hours, 2 minutes and 9 seconds.

The race is also a favourite for sailors and their families, with many using the event as a sailing sendoff prior to the start of the Melbourne to Hobart Yacht Race.

Damien King, skipper of the Frers 61, Margaret Rintoul V, says the boat will be chock a block with family and friends for the race. “We will be taking every family member that’s in Melbourne out for the race – it’s so much fun and it will be great to sail in such a big fleet,” said King.

For Entry, Notice of Race and List of Entries, please visit: https://www.orcv.org.au/sailing/races/boxingday-dash-cock-of-the-bay

Line honours pending after closest race for years   Under grey skies and light rain falling, 84 yachts with more than 600 crew onboard, set sail from Port Melbourne in the Ocean Racing Club of Victoria’s annual Cock of the Bay race to Blairgowrie. New arrival to the Victorian racing fleet, Leigh Dorrington’s Reichel Pugh Ccr 50 Original Sin has taken provisional line honours, ahead of John Paterson's Farr 45 Rush, which led the fleet across the start line off Port Melbourne at 10.30am. Original Sin crossed the finishing line at the Blairgowrie Yacht Squadron...

2021 ORCV Cock of the Bay Weather Prediction  Looks like the prediction is for a Southerly 15 - 20 knots for this Sunday's ORCV Cock of the Bay and it will be a tactical race for which way you choose to go. This video also includes a short forecast for the Offshore races which start at 2.30 on Monday from Portsea Pier.

2021 ORCV Cock of the Bay, Berthing, Meals and Adding Crew

2021 Cock of the Bay, Berthing, Meals and How to Add Crew Berthing at Blairgowrie (BYS) marina for competing boats in 2021 ORCV Cock of the Bay has been kindly made available at no charge for the night by BYS.  We ask, where possible you try and use the clubhouse for food and drinks and acknowledge BYS members, volunteers and staff, for the amazing effort they go to host us so we can enjoy the beautiful clubhouse and Mornington Peninsula. It is a condition of entry that boats must berth in accordance with the directions of the BYS Marina Master and into the pens allocated below. ...

Xpresso takes Cock of the Bay hat-trick on a perfect Boxing Day in Melbourne Under clear blue skies and with Melbourne’s Port Phillip bathed in sunshine, a record fleet of 112 yachts, carrying 618 crew, set sail on Boxing Day in the Ocean Racing Club of Victoria’s annual Cock of the Bay race. Paul Buchholz’s Cookson 50 Extasea took line honours, ahead of Gerry Cantwell’s Marten 49 Carrera S, which led the fleet across the start line off Port Melbourne at 10.30am. Extasea took the gun at the Mornington Yacht Club on Mornington Peninsula four hours and two minutes later. In the handicap...

2020 Cock of the Bay Line Honours on a perfect day

Extasea is Cock of the Bay line honours winner on a perfect Boxing Day in Melbourne Under clear blue skies and with Melbourne’s Port Phillip bathed in sunshine, a record fleet of 112 yachts, carrying 618 crew, set sail on Boxing Day in the Ocean Racing Club of Victoria’s annual Cock of the Bay race. Paul Buchholz’s Cookson 50 Extasea took line honours, ahead of Gerry Cantwell’s Marten 49 Carrera S, which led the fleet across the start line off Port Melbourne at 10.30am. Extasea took the gun at the Morning Yacht Club on Mornington Peninsula four hours and two minutes later. Michael...