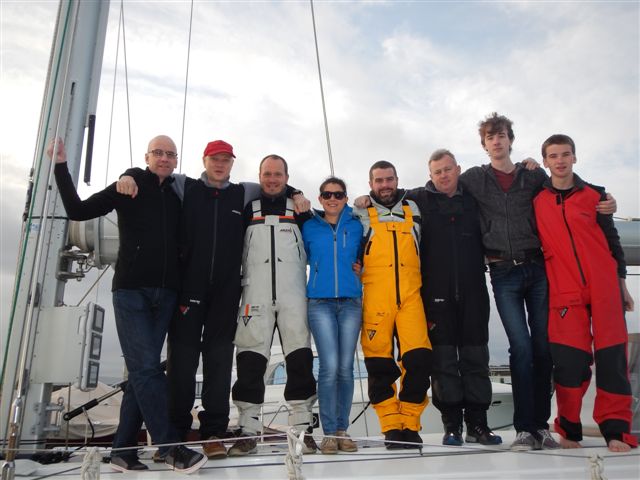 A VERY PERSONAL STORY FROM LEETON HULLEY - CREW ON CARTOUCHE

I would like to tell you my story. My name is Leeton Hulley and I completed the ORCV Melbourne to Vanuatu Yacht race on a Beneteau First 50 called Cartouche. My experience I feel is unique and I would like to share it with you.

The first two days of racing were much the same as the rest of the fleet. Tough conditions but all of us had experienced much worse. The morale on board was high and we were all sailing hard and aggressively.

Some 20 nautical miles south of Gabo Island, in 45knots of wind from the west we had been pushing the yacht very deep with great boat speed and confidence. After nightfall and in an increasingly worsening sea state we elected to go to a second reef. With a boom furling main the procedure on Cartouche is tricky so with all hands on deck we completed it in just a few minutes. This is when things changed.

We turned the boat back down wind and set the sails and reconnected the preventor line to the boom. Before we could generate any speed in the rolling sea, Cartouche rolled, the boom hit the water probably breaking the preventor in the process. As the yacht pitched back the other way the main crashed gybed. I was locking the main sheet into the self-tailer of the winch and never saw the boom and main sheet coming. It hit me with a force that must me equivalent to a Mack truck! Every ounce of breath was instantly expelled from my lungs.

I am no stranger to pain in the past I have fractured a vertebra, fractured my skull, twice cracked my ribs and bulged my lumbar disk twice. None of this even came close to the pain I was experiencing now. The main sheet had crushed my torso against the fiberglass seats of the cockpit. I can only describe it as totally excruciating. I couldn’t breathe at this stage but I realized what had just happened. I realized it was bad. It seemed quiet- there was only pain.

Mark was the first person to help me, pulling me clear of the main sheet and laying me on the cockpit seat. My first thought was that at best my spine was broken but I feared that it could be even fatal. Somehow this thinking was calming. And I could think clearly. Mark asked me how bad I was hurt. I said “I can’t breath”.

I consciously and mentally assessed my injuries my legs were working and so were my arms so with Mark's help I pushed through the pain and made it to the hatch and down the stairs.

Kate was at the bottom of the stairs and did everything she could to help me; getting me out of my PFD and wet weather gear. She helped me get into the saloon bunk and made me as comfortable as possible. She seemed so calm a clear headed, even though she later told me she wasn’t and didn’t know what to do.

I turned my attention to the commotion on deck. I could hear the anxiety and stress in the voices of the crew. I told Kate to let them know I was ok even though I wasn’t sure myself!

We were now sailing towards Eden with the intentions of getting medical help.

Within a few hours I had had time to do an assessment of my injuries and concluded that it wasn’t life threatening.

Our Skipper Steven had been in contact with the ORCV doctor Dr Rosie and with her authority the CAT 1 drug box was raided and my spirits improved. I was the first to crack some jokes, probably thanks to the drugs.

It seemed that at this stage that I may have cracked ribs, some torn muscles, internal bruising, but I was as comfortable as I would be in a hospital bed with people that cared about me and the food was definitely better here.

I talked with some of the crew and I believed that I would be getting better soon so I set my sights on convincing Steven not to put me off at Eden. It took a lot of convincing. His morale was low and his confidence shattered.

I persuaded the crew that if we headed up the coast they could pull into the nearest port at any time. My main argument being that there was no hospital in Eden anyway.

We headed north towards Sydney. The sailing style had become defensive and cautious.

The whole crew was visibly effected and I spoke to all of them individually over the next couple of days.

Each of the crew had felt at some point that they didn’t want to continue.

I hid my own concerns and fear from the crew and joked with them at every opportunity. They all made sure I was eating well, drinking fluids and taking pain relief. They discussed weather, tactics and conditions with me.

Four days it took me before I could get up on deck. Even though it was for a short spell the crew could see I was improving and the atmosphere on the boat was calming down.

A day becalmed halfway between Sydney and Lord Howe Island provided a day off for the crew. Mark cooked us all a roast dinner fit for a king and the whole crew, myself included sat in the cockpit under the boom tent with some delightful red wine and relaxed conversation. I then made a fresh loaf of bread that was devoured quickly, leaving me with a sense that I had still something to contribute.

From there on I improved a little each day and performed tasks as much as I could. Making coffee, doing scheds, debating weather and tactics and helming during sail changes. By this stage it only hurt when I breathed or moved so I new it was all going to be ok. It hurt the most if I laughed so the can only assume that the crew set out to punish me with regular jokes and antics.

It took us 12 days to get to Vanuatu.

I want to thank the ORCV for all that they did. The kept my friends and family up-to-date and reassured them. They did so much behind the scenes that you would never know about.

Most importantly I want to thank my crew. My friends; Steven, Nick, Damon, Simon Mark, Kate and Tom. You are all my friends and have a special place in my heart. You all cared about me so much and shared you feeling thoughts and concerns. You all went to so much trouble to make me feel valued and needed especially when I was struggling the most. I can’t wait to sail with everyone of you again and I will be honoured to sail with everyone of you in the future.

The 2014 ORCV Melbourne to Vanuatu race is an adventure that I will forever treasure and has provided me with experience, stories and enough comic material to keep me going for a long time.

Super Motor Yacht DragonFly was one of the first boats to provide emergency disaster relief to some remote villages in Vanuatu after Cyclone Pam hit. You can help too by donating to the ORCV Oxfam Australia Vanuatu Cyclone Pam Emergency Appeal www.Yachties4Vanuatu.com. Like many ORCV yachts who've cruised the beautiful Vanuatu archipelago, during their cruising, DragonFly also made many friends and developed relationships with the local communities and felt compelled to assist in whatever way they could. Their highly skilled crew, included 5 Emergency Medical Technicians and a Doctor. The...

Yachties 4 Vanuatu Day - Saturday 11 April, 2015 ORCV Vanuatu Cyclone Pam Emergency Appeal www.Yachties4Vanuatu.com Why? Category Five tropical cyclone Pam ravaged the tiny Pacific island nation of Vanuatu on Friday 13 March, 2015. The ORCV has forged a strong connection with Vanuatu over the last 10 years through the Melbourne to Vanuatu yacht race.  We have contributed significant humanitarian aid during that time, which is needed now more than ever. How? The ORCV have partnered with Oxfam, other yacht clubs and Yachting Victoria to assist Vanuatu. Come...

Our thoughts are with our friends in Vanuatu recovering from the devastation left by severe tropical cyclone Pam.  The ORCV has partnered with OxFam and is exploring other fund raising efforts such as a charity race and will keep you posted.  See subseuqnet website artclie Yachties4Vanuatu Day - Saturday 11 April, 2015. The ORCV has conducted three 1,885 nautical mile international yachts races from Melbourne to Vanuatu in 2006, 2010 and 2014.  During those events, entrants have filled a shipping container with humanitarian aid that they have distributed to various...

2014 Vanuatu Presentation Night Well, it has taken some time but finally we have some photos to share of the fantastic Presentation evening in Port Vila. Many thanks to George Shaw for organising a wonderful and memorable evening with help from Robyn Brooke, Kim Girdler and Ashley Stevens and to Nick Williams for the photos. Within 24 hours George had found a venue, organised the catering, shopped for trophies and his outfit! There was lots of fun and laughter and everyone was lei'd on arrival! More to follow, so stay tuned! Robyn greeting Guests Our...

A VERY PERSONAL STORY FROM LEETON HULLEY - CREW ON CARTOUCHE   I would like to tell you my story. My name is Leeton Hulley and I completed the ORCV Melbourne to Vanuatu Yacht race on a Beneteau First 50 called Cartouche. My experience I feel is unique and I would like to share it with you. The first two days of racing were much the same as the rest of the fleet. Tough conditions but all of us had experienced much worse. The morale on board was high and we were all sailing hard and aggressively. Some 20 nautical miles south of Gabo Island, in 45knots of wind from the west we had been...