Everybody knows Bass Strait can be a cruel place.  Various yacht races have reported the heavy seas and gale force winds that have forced their yachts to batten down.  Today has been cruel for a different reason, no wind at all in the middle section.  At different intervals during the day the Melbourne to Devonport fleet have been lucky if they could eke out even a knot of boat speed.  This afternoon has seen a welcome change with the wind filling in as promised.

Scaramouche had made a choice last night to track a long way west of the rhumbline and is now some 32 nautical miles away from Gusto Solo and Vertigo.  MetEye reports that they now have around 10 knots from the northwest and that this will build as they close in on Devonport.  Notoriously the wind then drops close to the coast and the entrance to The Mersey River.  Depending on the tidal flow, progress to the finish line has, in the past, proven to be agonizingly slow.  They will be expected to finish around 2-3 am.

The Melbourne to Hobart fleet is enjoying much better conditions and the tactics of which side of King Island are starting to play out.

The crew of Vagabond sent a video to Race Director Jeremy Walton in which they have declared themselves ‘Westies’, having joined most of the fleet in going to the west of King Island.

The next crucial decision then became, when to tack back.  Most seem to have decided to try to make the next leg of the race, a two-sail reach to the corner that is the South West Cape.  Blue Water Tracks, Alex-Team Macadie, Tevake ll and Lord Jiminy all went a long way west before making the tack back towards the rhumbline.  Faster Forward and Foggy Dew have chosen to tack earlier.  The angles this affords navigators will play out over the next eight hours supporting each boats individual strength.

They know that as they travel south, they will all encounter a windless weather hole to the west of Point Hibbs.

Audere and Alien decided to stay to the East of King Island and Joshua Thring skipper of Audere is making good progress on the rhumbline in 20 knot southerlies.  Given the weather hole that lies ahead, he may have made a longer-term strategic decision to stay close to the coast, where he can ‘rock hop’ taking advantage of any Land Breeze. 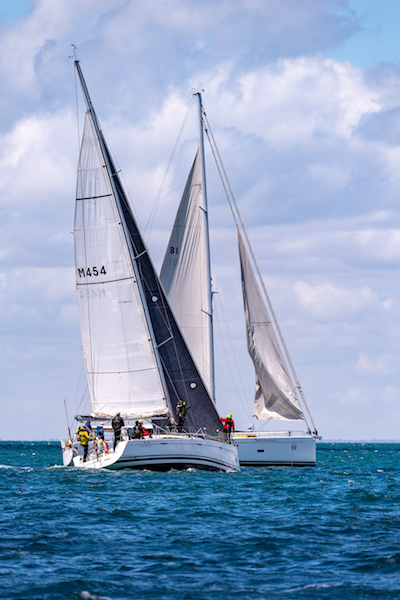 The race will most likely be decided by who can get into and out of that hole the quickest.  Currently even after taking such vastly different routes the distance to the finish only varies among the fleet by approximately 20 nautical miles.

Whoever rounds the South West Cape first will without doubt be in the box seat to also make the finish line in Hobart first.