At one o’clock yesterday afternoon skipper of Lord Jiminy, Guillaume Leroux, set his Class 40 to round Bruny Island. As he set course for Hobart’s finish line, he had sealed the fate of the rest of the fleet.

Good timing, great sailing and a dedicated crew of just four had achieved a dream with a second Line Honours win in the tough Westocoaster having won in 2019, (cancelled in 2020).

This 485 nautical mile race has been one of the slowest in its 49-year history. The race record set by Shortwave in 2008 was never under threat. It was however one of the most unusual and challenging of Westcoaster races. This year, for the first time ever, the fleet split in its decision of how to pass King Island with most of the fleet taking the route to the west.

‘I’d planned the race to keep it simple since there were only four onboard. For us going west of King Island was the right decision as the east side was at more risk of light wind. Also, it meant we didn’t need to be close hauled for a long time. We probably covered more distance, but it gave us a better angle and kept us out of the light air. We managed for the whole race to only have about two hours of no wind and we only did two tacks and five gybes. Keeping it simple. The boat sails well in 20 knots of breeze and can beat any boat. Under five knots we are a very slow boat.’ Leroux stated. Leroux was pleased to find that they have also won the Performance Handicap trophy. 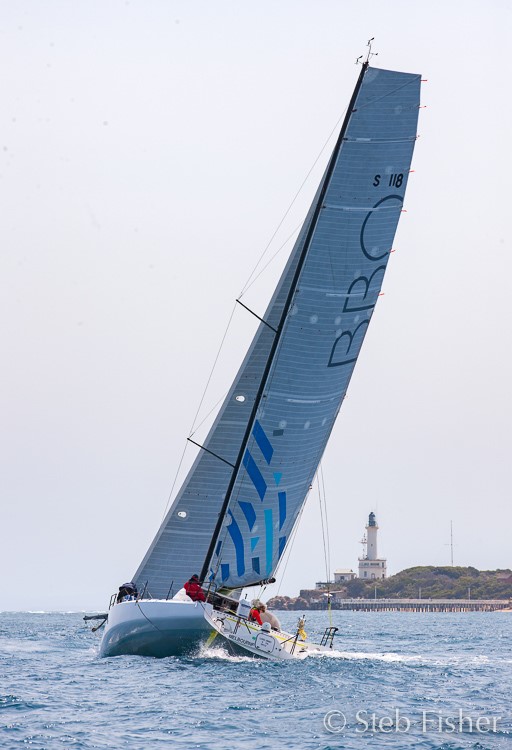 It wasn’t until the early hours of the next morning that they sighted second place getters, Joshua Thring in his Beneteau First 45, Audere finishing at 02:48. Followed at 03:02 by Faster Forward, Matt Fahey’s Sydney 38.

The most important trophy for all yachties is the handicap trophy, in this race the Heemskerk Perpetual Trophy.

This year that trophy will belong to Matt Fahey skipper of Faster Forward.

Fahey was delighted when he said today, ‘I had no concept that in only my second year of sailing my own boat in this race we could win.’

Fahey won the Rookie Skipper award in this boat in 2018. ‘The critical thing was we picked the right angle and the right point of sail, going west, (of King Island) made sense. Importantly the race was light, and our little boat responds well in the light, we understand

how to keep it moving in the light, to our surprise we were surrounded by much bigger boats for much of the race. We love this boat; it challenges us, and we can learn so much’.

The first of the double handed fleet Alex-Team Macadie crossed the line in daylight at 07:04. 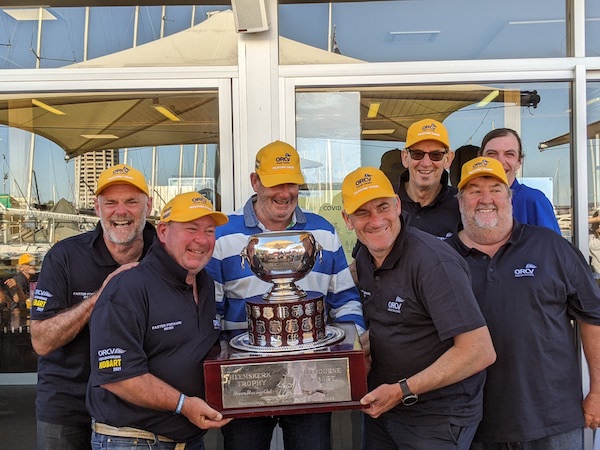 Grant Dunoon’s Blue Water Tracks will take the double-handed handicap prize completing a long and tiring journey for just two crew and conveniently arriving in time for the trophy presentations.

Race Director Jeremy Walton commented this afternoon, ‘The best feeling for a race director is to get all your fleet home safely, and that’s what we have done. These crews will enjoy a fantastic New Year here in Hobart and they will be back next year to do it all again for the 50th Anniversary Melbourne to Hobart Westcoaster.’