AWKR - Reasons to be cheerful - Parts one, two, three.

Was a tune by Ian Dury and the Blockheads! (So if you need the fix, it's HERE)

Now it is with many, many thanks to our good friend of this site, HBYC Commodore David Judge, that we have some pics of Saturday's action as part of the Australian Women's Keelboat Regatta on Melbourne's (cold) Port Phillip. 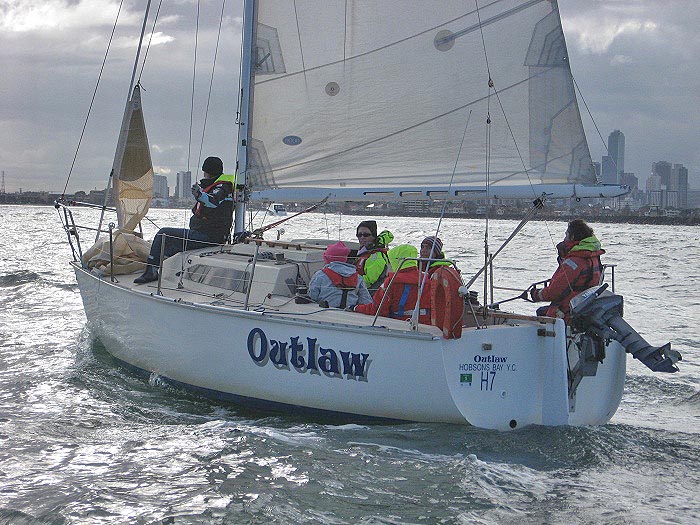 Mrs Judge was on Outlaw today.

David was also kind enough to also pass on a bit of on-site intel, "Wind speed varied out on the course, with some yachts carrying reefs at the start, but it went light during Race Two. The start was actively fought out - very impressive how they lined up, actually. After the race, I found out from a few crews what was on the lunch menu, quite a buffet some of the crews were feasting on (Ed. Probably all, given it is a women's regatta and I know over half the skippers would not forgo a decent indulgence). You know, with the temperature barelly making double figures today, there really had to be something to look forward to." Yes indeedy, David. 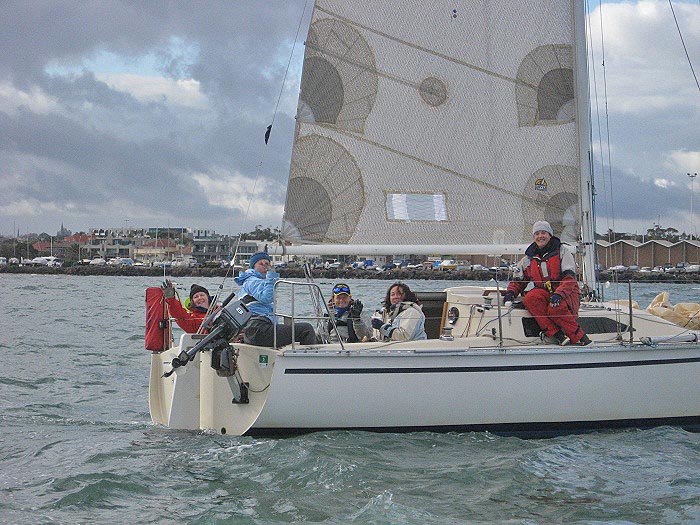 Getting organised for the lunch thing...

With the crews all fired up after their hearty meals, David also observed that, "The fleet were certainly keen to finish the day's sailing, as close to half the fleet was OCS for the start of the third race, and so the general recall got 'em all back for another go at it." 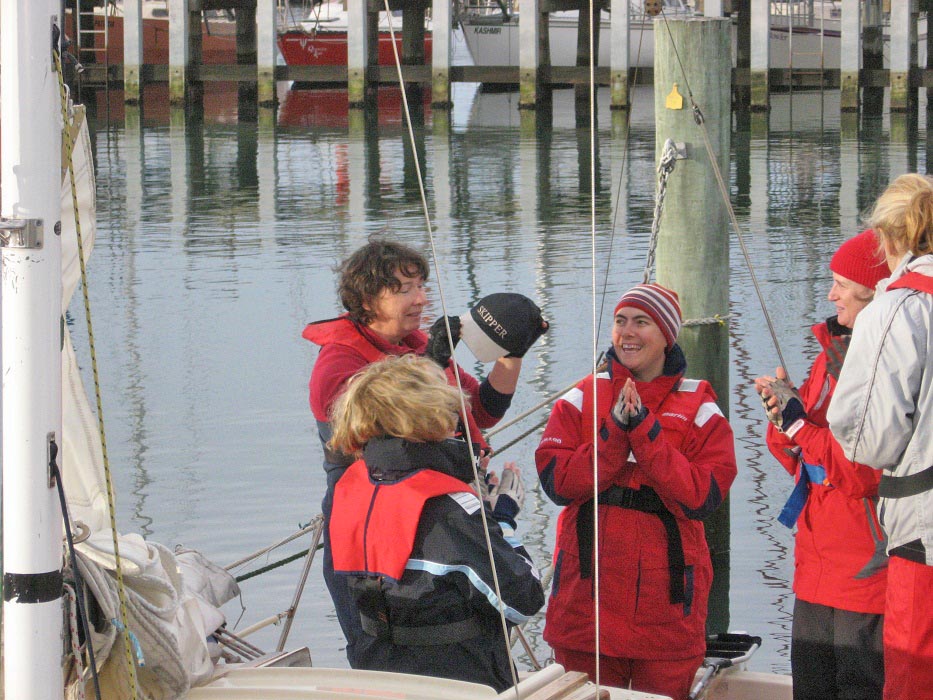 Outlaw presented the Skipper with an appropriate cap - nice touch - beannie or dry suit more like it I feel!!! Perhaps the girls from Port Douglas bought the last of them, when they flew in from FNQ on Wednesday...

Wind was sort of 15-20knots from the West, when it flicked through to the South, at about 1300hrs and abated to 10's and the occasional 15, so this is no doubt what caught a few crews out for being underdone in the rags department.

Race One IRC was firstly the Adams 10 pair of Top Gun, Salamander III and then Espresso. AMS was Top Gun, Hyperactive and Salamander II, with my good friend Lisa Hammond driving the Radford Sprint 35, Silk just outside in fourth (Got the gun though, so WoooooHooooo). Good to see her out there after the killer start to the year she had. PHS was Silk (good one), the slippery little Tigris in second and then our new ORCV pal, Jo Harpur with her Spirit of Freya. 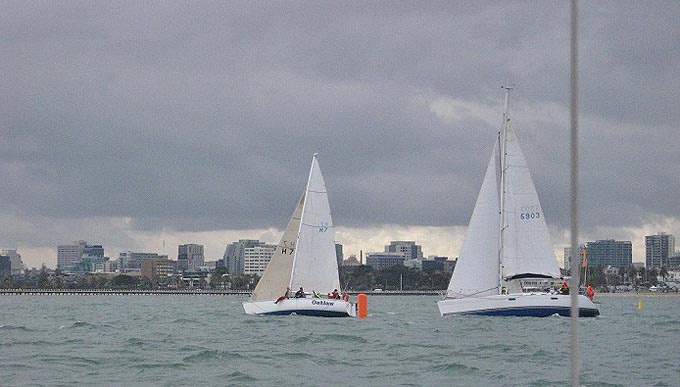 Race Two IRC was Espresso turning the tables on Top Gun and Salamander III, with an honourable mention to Tanya Stanford and the girls of Nouannie for their fourth. See what happens when you leave the token guy behind!!!! AMS was Robyn Coombs' J24 Hyperactive, then Top Gun and Nouannie. AMS was Silk, Top Gun and then Salamander III - so it had to be a good day for the quicks! Gin is on them girls... Really, they just called to say so - no, really.

Race Three IRC saw a return to Race One's IRC result and would you beleive it.... AMS as well! PHS was Top Gun, Salamander III and then Silk, with Mrs Overnewton grabbing the fourth.

Seems quite a few have got their eyes on the scoreboard, so Sunday should be fun. In What will you get?, we looked at the likelihood of various weather scenarios for the Queen's Birthday Weekend, as earlier in the week it all seemed to be a bit bleak. That appears to have passed, so with the breeze softening to effectively nothing, all results are going to count for more. Therefore, stay focussed on trim and look for squirts to go and grab the opportunities they will bring. It is June and it is Port Phillip, so anything is possible, but my tip of the weekend has to be - stay warm. Cold weather is one element virtually certain to be a constant! Did I get out of that without roping myself into anything?

All right - a few pics to finish us off. 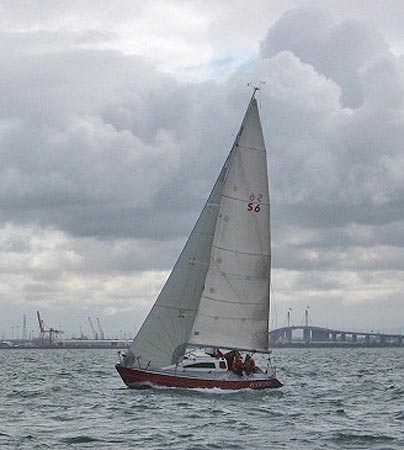 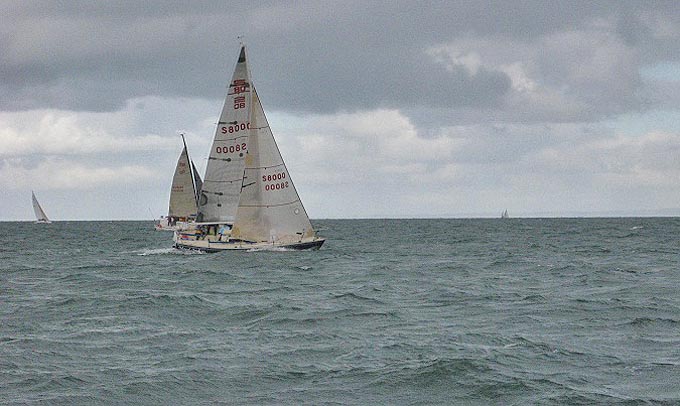 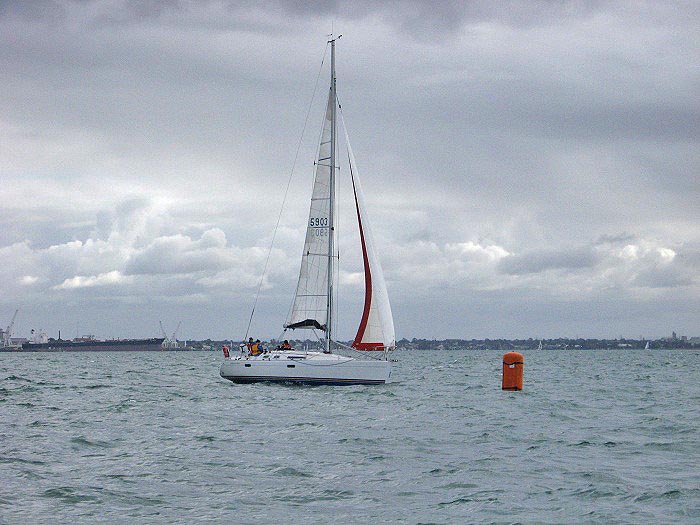 Jo Harpur's Spirit of Freya makes it to the mark. The ORCV's Sally Williams is also onboard. 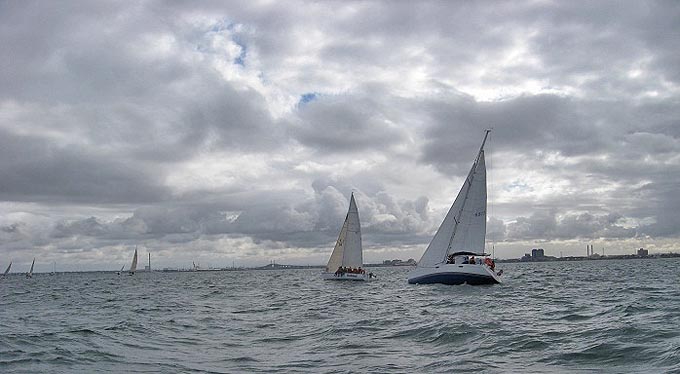 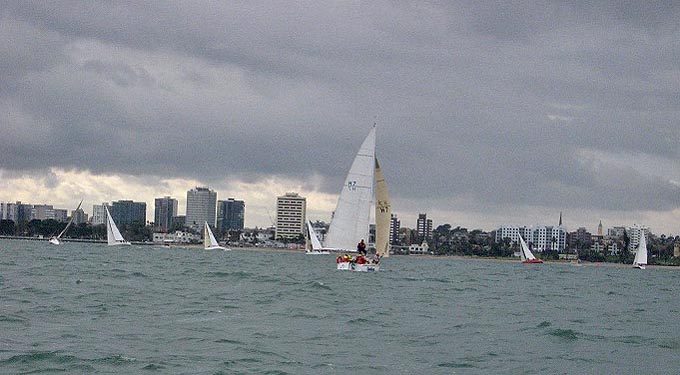 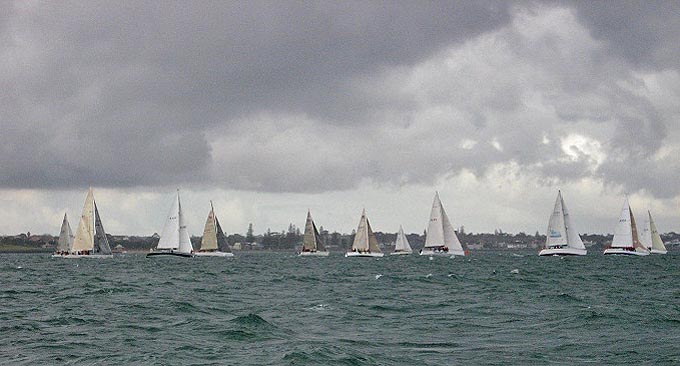 Hi ho, Hi ho, it's off to work we go. Look at that cloud formation on the right - awesome stuff. 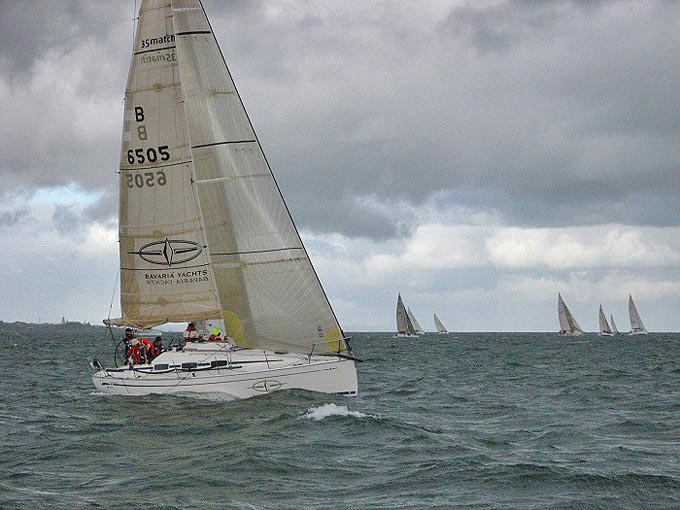 I just had to have this pic last, as it Reckless, which is driven by Patricia Laverty for the AWKR. She is current FDU Poster Girl and is the one in stripes on the bow of Magazan 53 in the centre, directly below. She was out to seek the mung bean flyer on the fleet here in Race Two, so it would seem....