The twentieth Australian Women’s Keelboat Regatta (AWKR) on Melbourne’s Port Phillip, was the perfect time to recognise the efforts of the event’s Founder, Gai Clough. At a packed presentation night on Monday, June 14, she received the AWKR 20th Anniversary Special Achievement Award.

After being recognised for all her efforts over the years, Gai had this to say, ‘I’m just so thrilled that my baby has grown to be such a huge event.’ 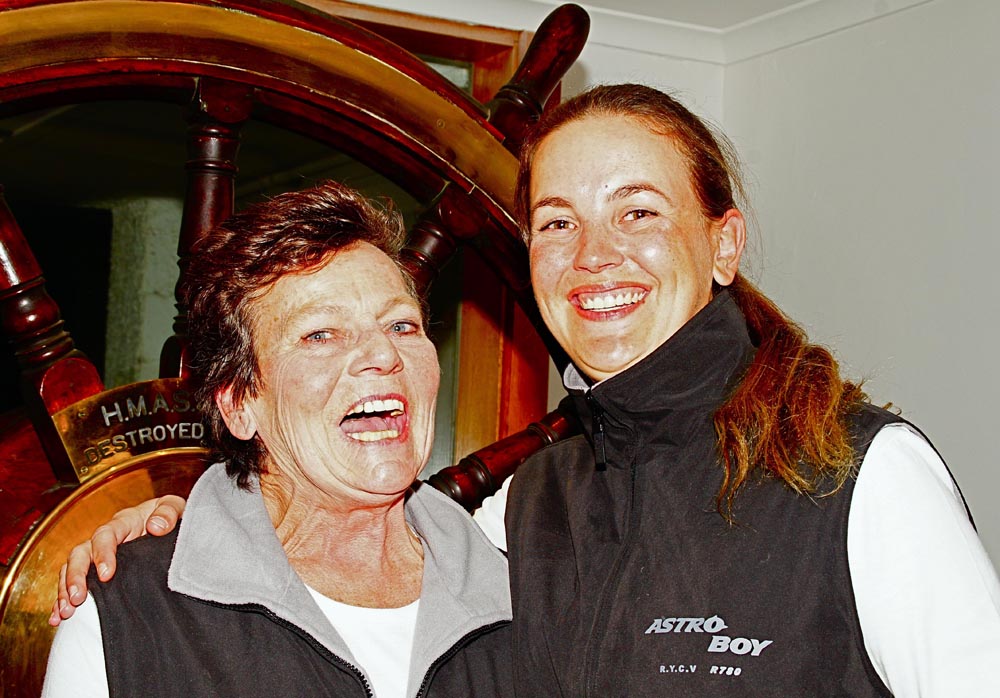 Out on the track, the 21 crews comprising 168 sailors from Victoria, South Australia and Far North Queensland, had a marvellous time. This included Sabina Rosser, who was competing in her 20th AWKR. The Royal Melbourne Yacht Squadron in St Kilda is the host club for this annual Queen’s Birthday Weekend event. Amanda Wakeham, the Race Officer commented, ‘We’ve had three days of fabulous racing. It has all been very competitive, but done in good spirit. It is really an absolute delight to have such a fantastic standard of racing going on.’

Three days in Melbourne at this time of year is enough to have any outdoor event organiser worried. Although cold for the most part, with an abating breeze over the course of the regatta, there was still enough wind on the last day to get the sixth and final race in. 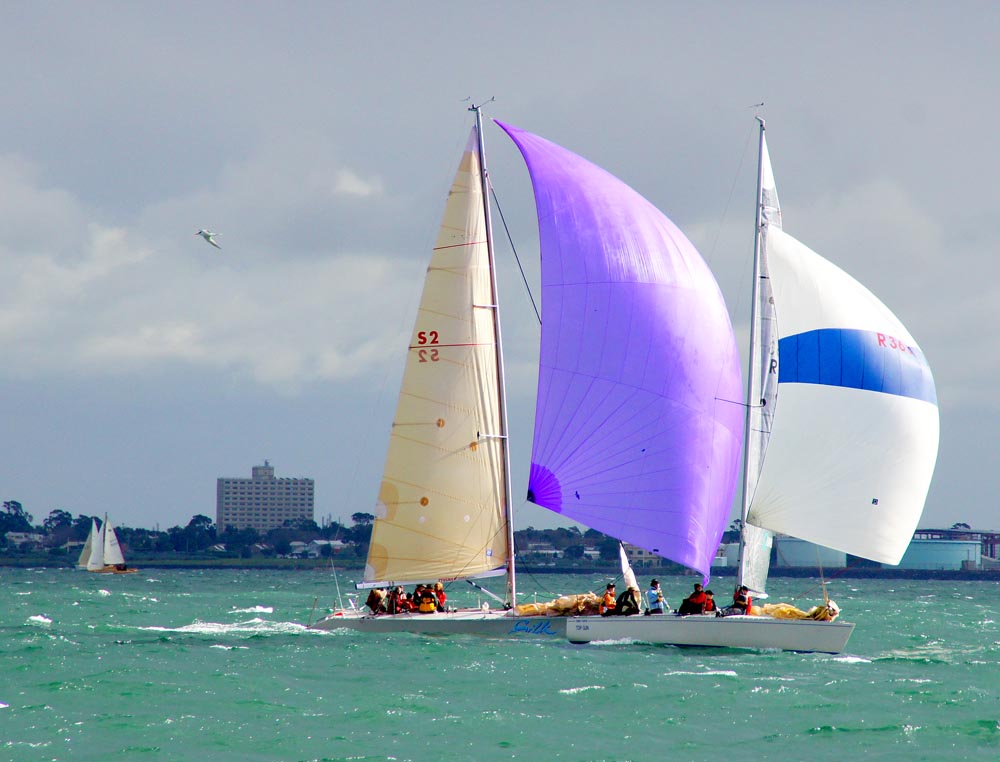 Silk, driven by our pal Lisa Hammond cranks it up to skip past Top Gun.

Early on it became apparent that a few crews had their eyes on the coveted IRC and Australian Measurement System (AMS) trophies and skipped out to a handy lead. In the Performance Handicap System (PHS), there was always a high level of intrigue and no real shining beacons at the top. In fact, it would go all the way to the last day and last race, with at least four crews making a late and certainly not futile charge at the dais.

Ultimately, Top Gun, the Adams 10 from the Royal Yacht Club of Victoria took out both IRC and AMS. This was enough to have skipper Connor Burdon-Bear reveal the following about her crew and their racing, ‘Firstly a big thank you to Max Peters for letting us use Top Gun, which is now up for sale. Also, we had Josh White as our support crew, with Stephanie Strong and Erin Foster’s parents all braving the cold on Sunday to be with us.’

‘The regatta was brilliantly run by the Committee, RMYS and I am sure there are countless behind-the-scenes volunteers involved too. They would have had a lot of work to do, particularly in such variable conditions. Of course, the AWKR would not be as strong as it is today, without all of the competitors, many of whom have travelled from Interstate. We would like to thank all of the them and we hope to see you next year.’

‘It was just great to be involved in a regatta created to encourage women to get into sailing. Four of our six crew, including me, were first timers to the regatta and we hope to be able to encourage more women to compete next year. Erin Foster, Bec Bohling, Steph Strong and I have sailed together in SB3's, as the Oceanburo Girls and we can understand the Queensland team, Twisted Sisters, suffering with the cold this weekend, after doing a regatta up there the week before. They really do have a very mild Winter!’ 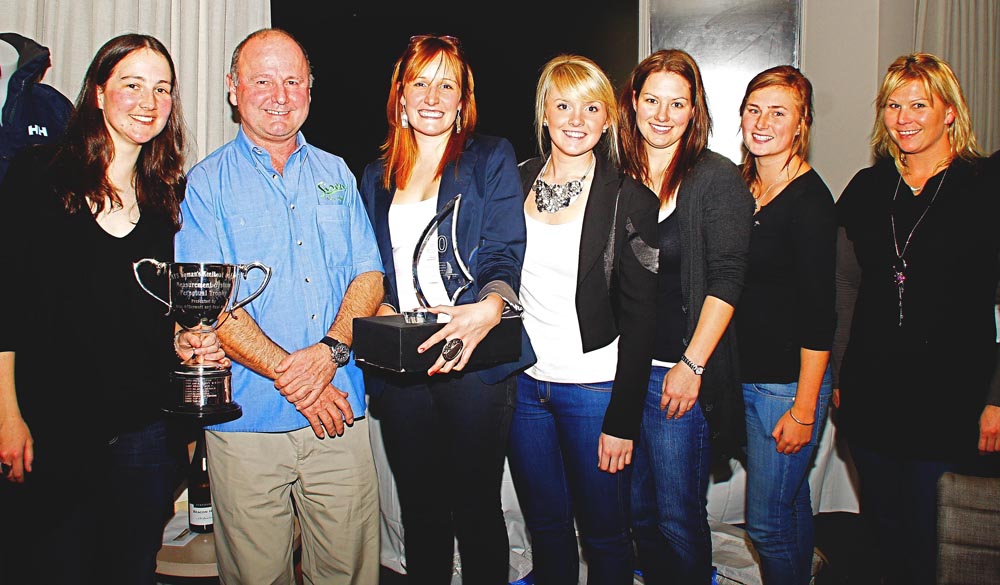 Team Top Gun with Brian McDemott - and these are the links to the Oceanburo pics - One, Two, Three and Four. Get busy clicking...

‘Kate and Meaghan Aulich completed the crew and were invaluable, in particular for their match racing skills and tactical prowess. We were absolutely delighted to win both IRC and AMS. It is certainly different sailing in a fleet with several classes, involving the use of handicaps, compared to our one design dinghy background.’

The J24, Hyperactive, is off to the World Championships in Sweden with their all-female crew. They placed second in IRC after fighting it out with their larger rivals for the regatta and it prompted Robyn Coombs to say, ‘This is our fourth time that we have competed in the Australian Women's Keelboat Regatta on Hyperactive. It’s really great racing, which we have always enjoyed and we’re very happy with our 2nd in AMS.’ 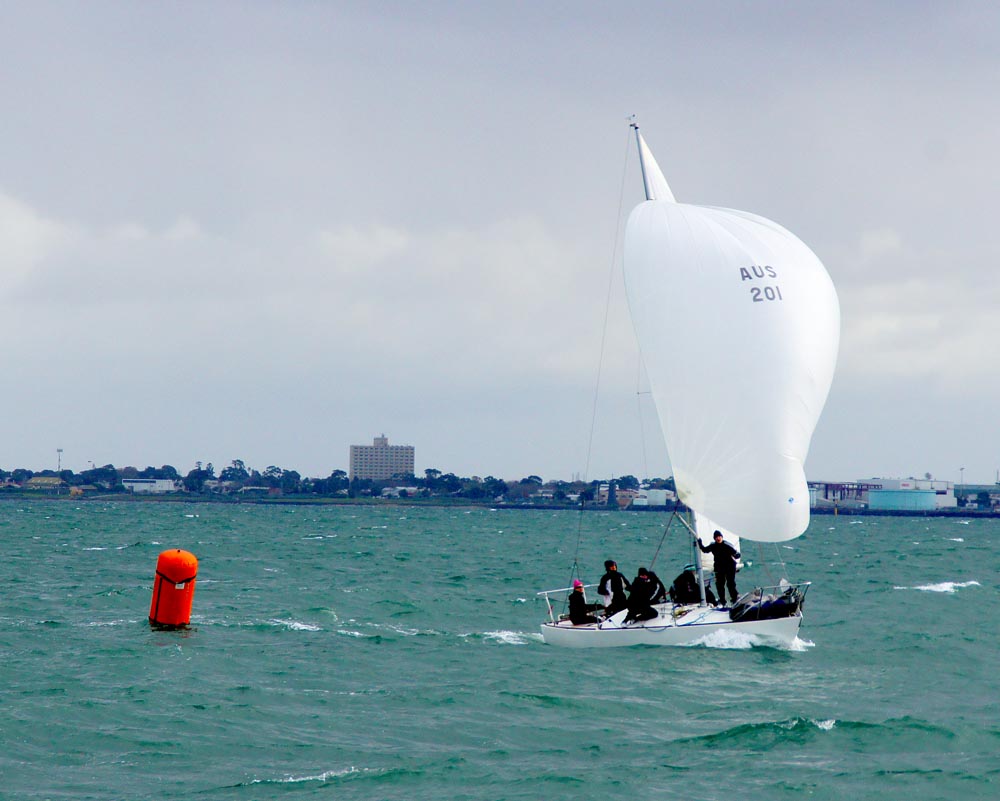 ‘This year, the AWKR was a shakedown for us, before we head to the J24 Worlds in Sweden in August. Accordingly, it was a great opportunity to get our crew work in sync under racing conditions. Our crew consists of me, Kirsty Harris on helm, Elizabeth Williams, Zoe Kitchen, Rachel Suda and Joelle Roderick. We’ve been training hard and really excited about representing Australia at the Worlds – possibly as the only all female team there!’

‘Hyperactive would like to thank RMYS for hosting such a well-run regatta and our sponsors Musto Australia and Barz Optics, who have managed to keep us well protected from all the elements this weekend’, was how Robyn finished off. No doubt all the competitors wish them well overseas.

Also punching a bit above their weight was the little S80, Espresso who were second in IRC. Diane Jackson, the skipper, had this to say, ‘After a number of years of sitting on the sidelines and watching the AWKR results from afar, the lure of participating in the 20th anniversary of this event was just too strong. So we came back for another go!’ 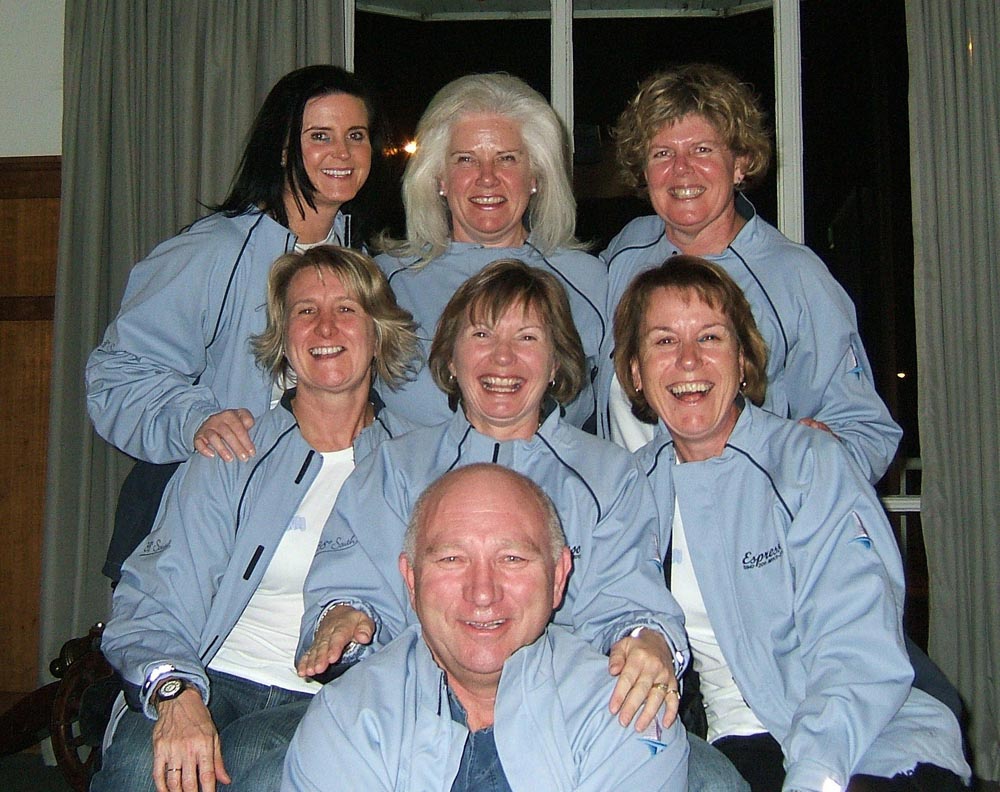 ‘The next challenge was to find a boat and there would be no turning back once we had been very generously offered the use of ‘Espresso’ by Ian Hughes. A highlight of the regatta for me was the privilege of sailing with an awesome bunch of girls, who did such an excellent job of getting us around the course in a very tidy fashion. To give you some idea of the sailing experience of our crew, we calculated that there was in excess of 20 Hobarts between us, as we drifted around on Monday morning before the start of the final race.’

‘The other big thrill for our second place in IRC, was to be awarded with the Tracy Luke & Ann Maree Pope Memorial Award. We not only knew these two girls, but a few of us had the honour of sailing alongside Ann Maree (Budgie) in this very regatta on Myaura in 2000 and Dolly in 2001. Accordingly, the result was just that bit sweeter.’ Brian McDermott presented them with their trophy, so it must have been very moving indeed.

‘Everyone enjoyed a world-class event at RMYS, for its high level of competitive sailing and camaraderie amongst the participants. Here’s to the next 20 years of the AWKR.’

The winner of the PHS prize in the end was the little Scampi 30, Nouannie. ‘I was really pleased with our result overall’, said their skipper, Tanya Stanford. ‘Onboard on Saturday, we were a little out of sorts for the first three races. We had a spinnaker wrap (never had one before) as well as messy tacks and some distractions. For Sunday, we decided to modify our crew routine, thereby allowing better monitoring of the fleet and enabling the trimmers to execute their jobs far more efficiently and ergonomically. These changes reflected straight into our results on the second and third days of the regatta.  As the skipper, I am extremely lucky to have a very experienced and dedicated crew, who can still have fun and be happy in a competitive environment, such as the AWKR. This level of professionalism is even carried through to the bar, to debrief after racing and plot strategies for the following races.’ 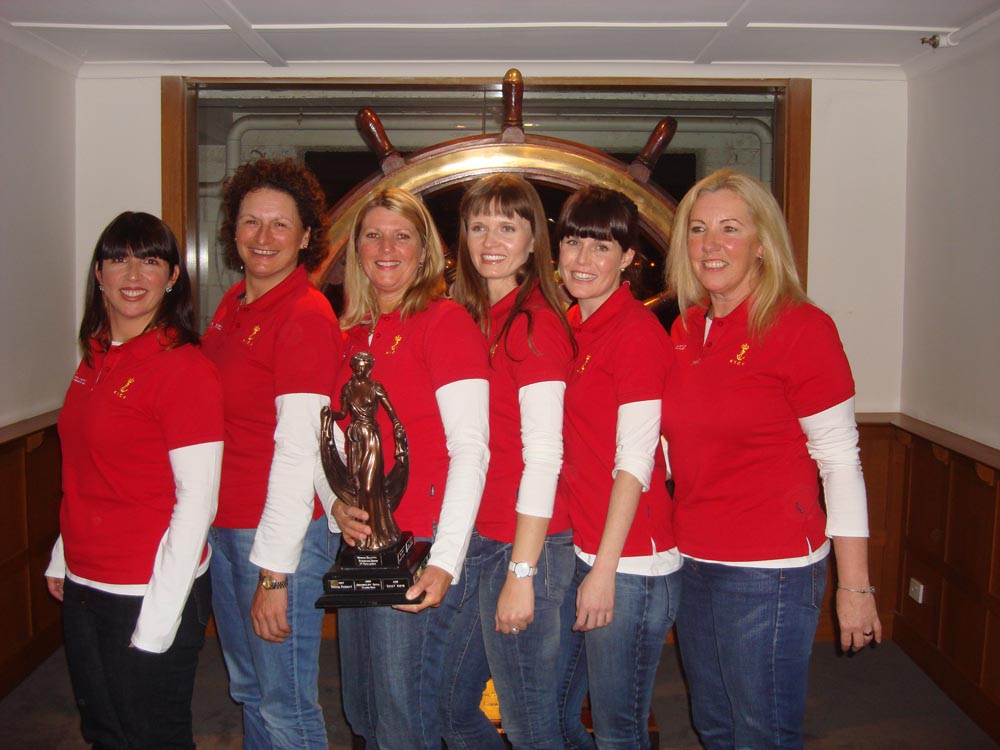 The Nouannie crew comprises of Cath Beaufort on trim, Katrina Economou in the office, Paulina Hryniewiecka at the mast, Kate Brown on the foredeck and Lynda Christopherson on the main. Tanya has the trophy...

Also awarded on the night were trophies for most improved, best owner/skipper and overall sportsmanship. Most improved goes to the boat that simply gets better and better for the duration of the regatta. It is based on the PHS results and this year it went to Masumi, who were one of the group mentioned earlier for making a late charge at the main dais. Skipper Jo Morley and crew Celia Dymond sailed the whole regatta two-handed. Jo had this to say about it all, ‘Masumi had a fantastic regatta. Doing it two-handed was always meant to be a challenge and although our kite caused us some problems on day one, our final race was the kind you dream about. Everything just worked! We can't wait for next year. Can't thank Celia enough for the fantastic job. She must have been exhausted, but never once stopped grinning and neither did I, for that matter.’

The best owner/skipper prize is awarded to the girl(s) who have made the ultimate effort to get to the regatta in their very own boat. The result is straight from the PHS table and given that they were at the top, that one too goes to Nouannie. Well done.

The Race Officer determines the recipient of the ANZ sportsmanship award. Generally speaking, it is based on something special on the water or effort to be part of the event. Belinda Cooper, the skipper of the ‘Twisted Sisters’, sailing on Spellbound collected the award for her crew’s effort of training in bikinis in FNQ, only to then race in chilly old Melbourne in June.

Belinda told us how they came to be on Port Phillip. ‘It was on a hot, sunny day at Magnetic Island last year, when I was asked if I would like to go to Melbourne for the AWKR. What I great idea I thought. A minor change in crew uniform for the Far North Tropical Queensland girls really paid of with winning the Best Sportsmanship award. Arriving in to Melbourne in our normal uniform of Tropical shirts and bikinis, it did not take long to realise we may need to borrow a couple of pairs of wet weather gear and some thermals!’

‘All dressed up we found everything just a bit strange - can you really tack with all those clothes on? Luckily, the seven of us were well looked after by Ian Ewing and his boat, Spellbound, which he so kindly let us use. We finished all the races in the middle or upwards of the fleet, which we thought was good going, seeing as we had all that excess weight on our backs. That wet weather gear really is very heavy... The experience hasbeen fantastic and plans are already underway to come back again next year. Thank you to all at RMYS and we look forward to the 2011 AWKR.’ The Far North Queensland Twisted Sisters consist of Belinda, Mickey, Qarmar, Iseta, Tracey, Ellie and Tina. 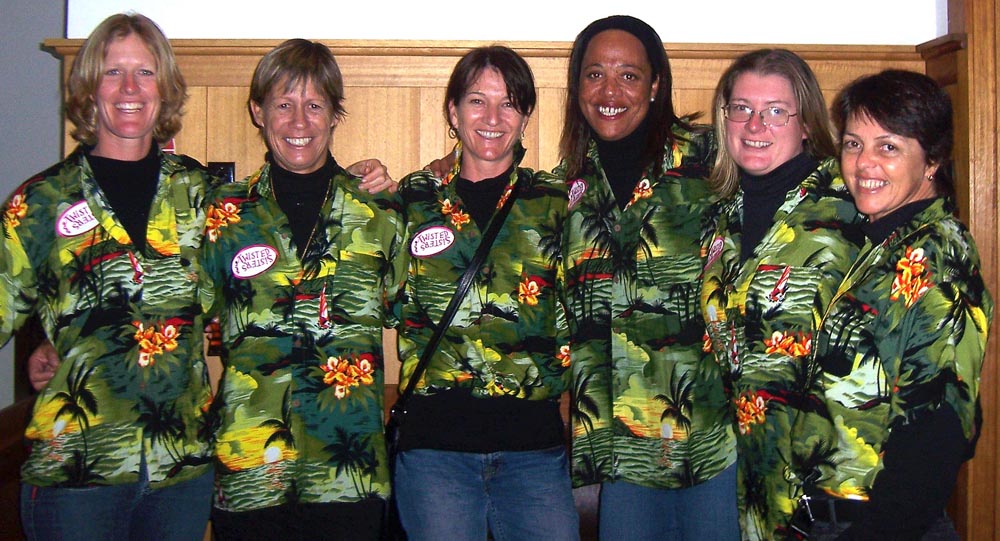 Our friends Rosie Colahan and David James talked them into it. Can't have been too bad - they're coming back!

Now talking of sportsmanship, it is interesting to note that during his speech, Councillor Serge Thomann, from the Catani Ward of the City of Port Phillip, suggested that as Top Gun had so many Heat Prizes, they could afford to give one to the crew from Port Douglas as a memento, for making the long trip South into a Melbourne Winter. This occurred at the time and lead to Espresso passing one of theirs on to the crew from Adelaide, who had been sailing Mrs Overnewton. Outlaw also passed on one to the crew of Esprit.

Janina Goethel and the organising committee of the Australian Women’s Keelboat Regatta would like to thank all the competitors, especially those who travelled from Interstate. No event is possible without the support of sponsors and so the efforts of the many companies and individuals, including the generous contributions of Helly Hansen, are greatly appreciated.

The AWKR thread, it is here with What will you get?, Reasons to be cheerful, Child's Play and Like a worm.